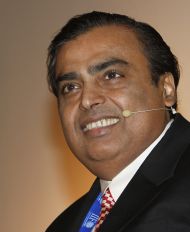 The Central Reserve Police Force, which recently took over the duties of guarding RIL chairman Mukesh Ambani, has raised concerns in ensuring a 'fool proof' Z category security to the business tycoon in the absence of local logistical support to its squad.

The para-military force has written to the Ministry of Home Affairs alerting it about possible limitations its personnel may face in the event of an attack on Ambani who has been given VIP security.

Official sources said the CRPF has desired that the Union home ministry take immediate steps and notify all the states in the country to provide a local police squad whenever the VIPs under its elite 'Z' category cover move in their respective jurisdictions.

Also, they said local intelligence and data on topography should be provided to its 28-member squad commander moving along with the protectee.

The CRPF has recently deployed an elite squad of its commandos for securing Ambani who has been accorded a 'Z' category security after the home ministry analysed security threats to the industrialist and found them to be 'positive'.

The force has reasoned that its security team deployed with the VIP is a mix of commandos coming from various parts of the country and they do not always know escape routes and potential threats particular to an area and at the place where the VIP they are securing is on the move, like in Mumbai or Kolkata.

The CRPF has asked notification of this arrangement in specific context of Ambani, whose security duty it has just taken over, while it has also asked for providing a similar facility to its new 'Z' class protectees.

It has recently taken over the security of media personality and former Minister of State for Parliamentary Affairs Matang Singh under the same category.

With Ambani's security under its belt, this is the first time that the CRPF is providing VIP security to a private person on the lines of a similar cover it extends to government functionaries in Jammu and Kashmir and Punjab.

In the case of Ambani, the security expenditure will be borne by him which is estimated to cost about Rs 15-16 lakh per month.