Bharatiya Kisan Union (BKU) supporters stayed put on the Delhi-Meerut Expressway on Friday as the crowd swelled there, notwithstanding the Ghaziabad administration's ultimatum to vacate the UP Gate protest site where security force in large numbers was re-deployed. 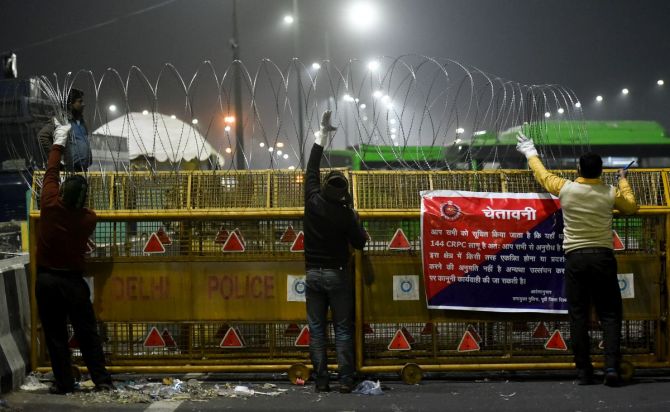 On a call of the BKU, more farmers from western Uttar Pradesh districts such as Meerut, Baghpat, Bijnor, Muzaffarnagar, Moradabad and Bulandshahr reached the UP Gate by early morning to join the stir, even as the security forces at the protest site thinned out overnight.

A confrontation was building up at the UP Gate in Ghazipur even as frequent power cuts were witnessed on Thursday evening at the protest site, where BKU members, led by Rakesh Tikait, are staying put since November 28 last year.

Ghaziabad District Magistrate Ajay Shankar Pandey and Senior Superintendent of Police Kalanidhi Naithani visited the protest site post midnight to review the situation there even as hundreds of security personnel in anti-riot gears were deployed since Thursday.

Many of these personnel, including those from the Provincial Armed Constabulary (PAC) and the Rapid Action Force (RAF), left the protest site in the dead of the night following official instructions.

Flanked by supporters at 1 am, Tikait remained at the centrestage of the protest site -- the Delhi-Meerut Expressway, which has been barricaded from both sides, prohibiting regular traffic movement.

He remained there throughout the day, with some political leaders visiting and expressing solidarity, support to the farmers' movement.

Around 3,000 security personnel, including those from the Provincial Armed Constabulary (PAC), the Rapid Action Force (RAF) in anti-riot gears and civil police, were deployed in and around Ghazipur protest site, DSP Indiapuram Anshu Jain told PTI. 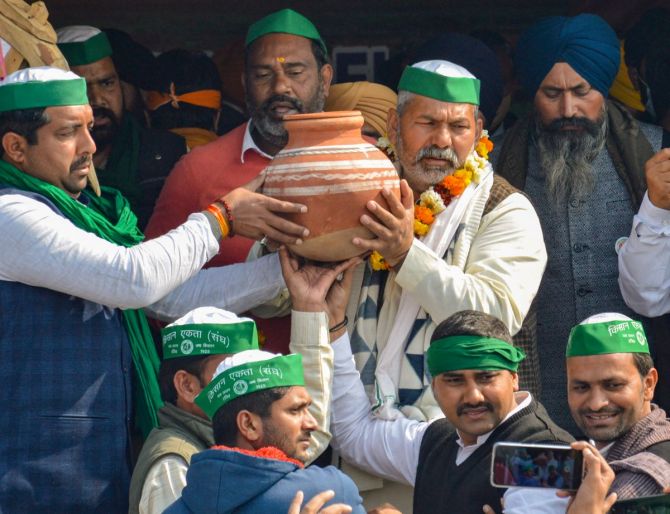 At the protest site, the size of the crowd, which increased manifold overnight, was estimated around 5,000 to 6,000 by districts officials while BKU office-bearers present there pegged it to be upwards of 10,000 on Friday evening.

For the first time during the protest, opposition parties of Uttar Pradesh came out in open support of BKU with some leaders reaching Ghazipur border, and others attending the mahapanchayat in Muzaffarnagar.

In his address to the gathering, Azad condemned the Centre's approach towards the protests, saying the farmers are fighting for their rights but 'they' have used all their tools to malign the community.

"This movement has public's support but the government is not understanding it," Azad said, alleging infiltrators were planted in the peaceful protest to malign the farmers' movement. 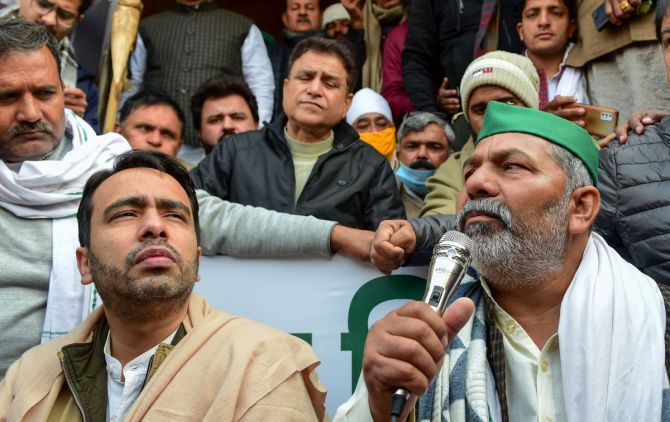 Several protesters waved the tricolour with some waving flags of farmer unions such as the Kisan Ekta Manch amid a continuous sloganeering of 'jai jawan, jai kisan', while many of them were lying down on mattresses covered in blankets as they braved the bone-chilling cold and wind.

"Zaroorat padi to khade rehke dharna denge, tum dharne pe baithe rehne ki baat karte ho (I can protest while standing up and you are asking me whether I am going to continue my sit-in protest)," Jagat Singh Rathi, 78, said.

With a muffler tied around his head and a stick in his hand for support while walking, the septuagenarian from Meerut said he has been at the BKU's protest since the agitation was launched on November 28 last year.

"When the Supreme Court has said farmers have a right to protest, then what? We will do it."

Ankit Sahrawat, a farmer from Muzaffarnagar, said he reached the UP Gate early on Friday along with 40-50 people.

"More farmers from western Uttar Pradesh districts will reach here. Everybody has condemned what happened in Delhi on Republic Day but now they have made Chaudhary sahab (Rakesh Tikait) cry.

"Unke aansu nikle hain, wo sahan nahi hoga (Farmers will not tolerate that Tikait had to shed tears)," Sahrawat, who is around 35 years of age, told reporters. 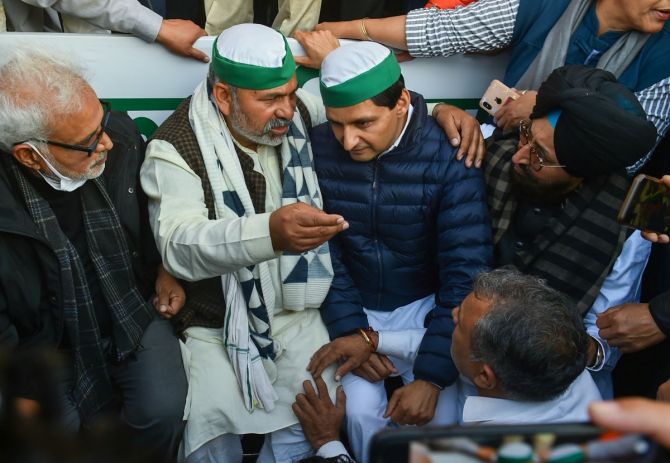 Ghaziabad police officer told PTI on the condition of anonymity, "Excess security force from the protest site has been withdrawn and only a minimal deployment of personnel remains there."

"Tension was building at the UP Gate due to an excessive deployment of security personnel since Thursday evening," he added.

According to the officer, some BKU protestors were served notices under section 133 (removal of public nuisance) of the Code of Criminal Procedure (CrPC) on Thursday.

The Ghaziabad administration had made a 'verbal' communication to the BKU on Thursday, giving it an 'ultimatum' to leave the UP Gate by midnight, a move that came close on the heels of three farmer unions calling off their protest against three farm laws of the Centre over the violence in Delhi on January 26.