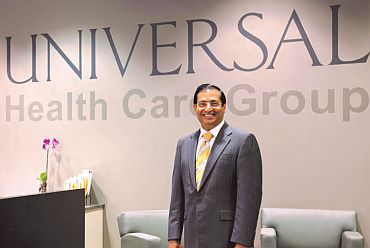 Indian American physicians and entrepreneurs, who invested an estimated $25 million in Dr Akshay Desai’s Universal Health Care Group Inc, are seething in anger after the company filed for bankruptcy. “The crook”, as the investors and friends call Dr Desai today, has gone underground. Aziz Haniffa reports

After Federal Bureau of Investigation agents last month raided the headquarters of former Republican Party stalwart Dr Akshay Desai’s Universal Health Care Group Inc, in St Petersburg, Florida, which has gone belly up and filed for bankruptcy throwing over a 1,000 employees out of work, the Department of Justice has called on the bankruptcy court to appoint a trustee for this major Medicare provider.

Guy G Gebhardt, a DOJ official and a US Trustee in Florida, in court documents filed on April 3, in the wake of the search-and-seizure warrant executed by the FBI as part of an investigation that federal laws may have been violated and criminal indictments are likely, reiterated that it was imperative that a trustee take over the reins of Universal.

He said he strongly believed there are grounds to suspect that the hierarchy of the company has committed fraud through false statements amounting to criminal conduct in its financial reporting.

“The United States Trustee therefore urges the court to authorize the appointment of a Chapter 11 trustee,” Gebhardt said in court documents he filed.

At the first hearing into the unravelling of Universal, the US Bankruptcy Court in Tampa, Florida, did not take up the appointment of a Chapter 11 trustee, but it likely to consider the DOJ request in its next hearing in May, when the issue is scheduled to be taken up again.

Gebhardt charged in court documents that the appointment of a trustee was a no-brainer because in addition to the FBI search-and-seizure at the Universal headquarters, it had been found that company officers, including Desai, the chairman and CEO of the company, Sandip Patel and Jeff Ludy had received personal favours from vendors as a quid pro quo for providing them with Universal’s business.

He said consequently, these officers had transferred assets to related entities, but that these transfers had not been documented in the required financial documents with the bankruptcy court.

In February, less than six months after Desai -- a major fund-raiser for the GOP -- boasted to rediff.com that “my company is now doing business in 20 states and this year we are expecting revenue of $1.5 billion”, filed for Chapter 11 bankruptcy protection, leaving scores of Indian American physicians and entrepreneurs who invested an estimated $25 million (Rs 137.22 crore) high and dry.

The unravelling of Universal also led to the Surat-born and raised Desai, 55, resigning from the Florida Board of Education and as finance chair of the Florida Republican Party, with GOP sources saying Governor Rick Scott and the party bosses who had appointed him to these positions respectively, are asking him to tender his resignation immediately.

During the presidential campaign, Desai also was appointed co-chair of Asian Americans for (Mitt) Romney and at the time he had told rediff.com that GOP candidate Romney ‘a few months ago visited my company and spent a couple of hours and I gave him a tour and explained to him what we do and he was quite impressed’.

Among some of the major investors in Universal were doctors Zach Zachariah, another longtime major Republican Party fundraiser who had ploughed in over $6 million, and Raj Gupta, who had invested over $4 million.

Several other Indian American physicians, including Dr Raghavendra Vijayanagar, founder and former chairman of the Indian American Republican Council, and several entrepreneurs, and even some academics had invested anywhere from $250,000 to $1 million each, and among them there was an overriding sense of deep disappointment and despondency, with one of them saying, “All the investors have been right-royally screwed.”

“Who the hell knows what he did with all the money,” one said. “Hundreds of millions of dollars and God only knows where the money went,” this investor said, adding, mockingly, “He was living larger then life, flying in private jets and talking big to Romney and all those people, and of course, nobody wants to talk to him now, and all the politicians have washed their hands of him.”

According to its website, Universal provided federal funded entitlement insurance programs such as Medicare and Medicaid to nearly 200,000 customers in 19 states and had 40,000 Medicare and 60,000 Medicaid members in Florida alone, who were now in a quandary regarding the future of their health insurance.

The Tampa Bay Times reported that when the FBI agents raided the Universal headquarters March 28, employees were ordered out and told to immediately get away from their computers.

The FBI raid was carried out on the same week that the bankruptcy court trustee had alleged “a pattern of dishonesty or gross mismanagement” including “side deals” that benefited insiders, and had cited examples where more than $18.3 million had been transferred to a Universal subsidiary also founded by Desai and $2.2 million in “bonuses and other compensation” to company officers Desai, Patel and Ludy in addition to their salaries, also in 2012.

The trustee said that even as Universal was knee-deep in financial trouble, Desai had continued to draw a $900,000 salary and another $2.5 million or more in bonuses and other compensation in 2012.

After the FBI raid, Desai, who was easily accessible and would immediately return this correspondent’s calls couldn’t be reached and Zachariah, Gupta and others who had invested in Universal, said they could not reach him either and believed he had gone underground or may have left the country.

But one investor said, “Nobody knows where he is,” but added, “The federal government if they want to catch you, they will find you, and you can bet they will find him and bring him to justice.”

Zachariah, who had been kicked out of Universal’s board and recently filed a lawsuit against Desai, told rediff.com, “It is unfortunate that so many of his friends and close associates lost everything they had invested. It’s such a tragedy because many of them have lost their life savings because many of them were simply salaried professionals.”

But he didn’t want to elaborate further because he already has a lawsuit pending against Desai, but acknowledged, “I lost most of the money but a lot of people lost their life savings.”

But Gupta had no such compunctions in castigating Desai and said, “He took us for hell of a ride and I lost $ 4 million.”

Asked if a pall of gloom had descended over the Indian Americans in Florida, who had all invested in Desai’s venture and continued to invest when he continued to give them the spiel that the company was flourishing, Gupta said, “It’s not just gloomy, it’s all gone. The company is gone.”

“He is a big crook. Just imagine, just before filing for bankruptcy he had transferred $18.5 million plus and took a bonus of over $2.5 million. He is such a big crook.”

Asked if he had spoken to Desai recently, Gupta, said, “What’s there to talk to him -- he is not worth talking. He is a big crook. I wish he goes to jail. He took everybody for such a big ride -- all of us, Vijayanagar, me, Zach, and so many other people.”

“The thing is, I just cannot understand what kind of Gujarati he is. He was saying all along, I am making profit and in December we had a meeting and he said we are making big profits and I’ll be going to the stock market in a few month. And here it comes, one month later, everything falls apart, because he is such a liar.”

Asked what recourse he and the other investors were contemplating, Gupta said, “What is the recourse -- it’s one hundred percent gone. The only thing we can get is something if it is provide he is a fraud and they take him for all the money he stole and we get some compensation from Uncle Sam. That’s about it, but the money is gone. It’s all over.”

Clearly despondent as well as angry, Gupta said, “It’s so unfortunate. I never thought that he is going to be such a big con -- such a con man. And he was talking so big. He has no shame. He has swindled so much because he and his wife and his friend were on the board. He is such a despicable thief -- transferring monies to personal accounts and all that.”

The Tampa Bay Times also said that Desai could not be reached and that “no one answered the door at his $2.6 million bay front Snell Isle mansion. A burgundy SUV and a dark silver Audi R8 sports car sat in the driveway, but the gates to the property were closed.”

Earlier, some of the investors in interviews with rediff.com had speculated if all of the monies he contributed and bundled for the Romney campaign and as finance chair of the Florida GOP, could have been investors’ money infused into Universal.

The Tampa Bay Times reported that “the company also contributed $81,000 to Republican candidates and causes, on top of Desai’s personal donations,” and noted that “until a few weeks ago, Desai was a much-courted figure in state and national Republican circles because of his prominence in the Asian American community and political contributions totalling nearly $650,000.”