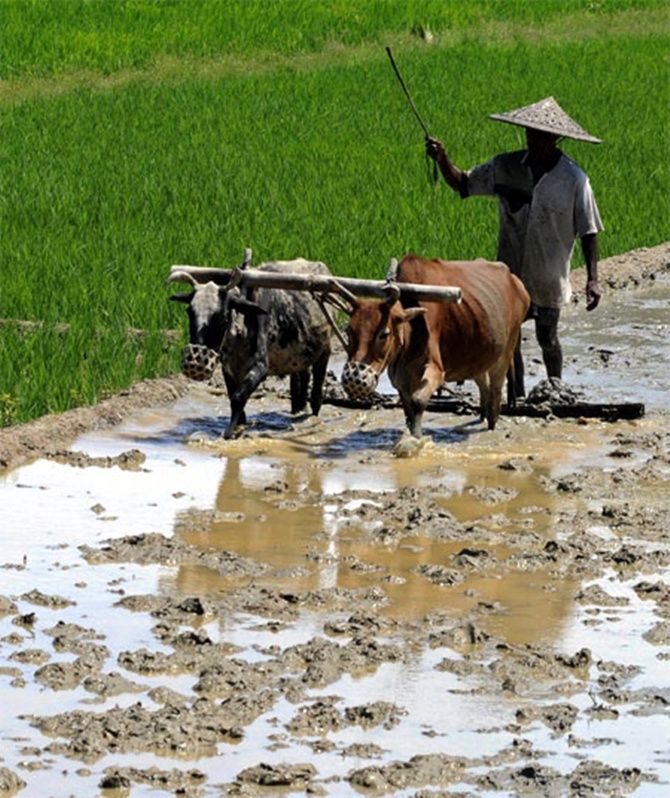 Faultlines in the National Democratic Alliance on the land bill are visible with three of Bharatiya Janata Party allies -- Shiv Sena, Shiromani Akali Dal and Swabhimani Paksha -- red-flagging a number of provisions of the proposed legislation.

The contentious bill, which proposes amendments to the Land Acquisition Act of 2013, is under examination of a Joint Committee of Parliament which is about to conclude its consultation process and consider it clause-by-clause next week.

While Shiv Sena has, for quite some time, been on record seeking incorporation of a clause providing for 70 per cent consent of farmers in the bill, SAD and Paksha have written to the panel headed by S S Ahluwalia that “not an inch” of land should be acquired without the consent of farmers.

In its written representation to the JPC, five MPs from SAD --- Naresh Gurjal, Balwinder Singh Bhunder, Sukhdev Singh Dhindsa, Prem Singh Chandumajra and Sher Singh Ghubaiya said that they firmly believe that land is a priceless asset of the farmers.

“Not even an inch of it should be acquired by the government without the consent of the farmers/land owners,” they said.

The MPs also insisted that land should only be acquired for public sector projects and the “government should not get into acquisition for private entities”.

They added that farmers should not be denied the right to approach court for redressal of grievance.

The SAD is a votary of foolproof safeguards for compensating not only farmers but also those “dependents on land, including farm labourers”, their MPs wrote.

The Swabhimani Paksha led by Lok Sabha MP Raju Shetty has pitched for “consent of 70 per cent of farmers and five-time compensation” for the acquisition of land for the projects undertaken with public private partnership for development infrastructure.

The 2013 Land Act provides for four-time compensation on the existing market rate, which has been left unchanged in the NDA’s bill.

Shetty also made it clear that Swabhimani Shetkari Sangathana will support the law “only if the above amendments are included”.

Swabhimani Paksha also demanded that if the land remained unused for five years after acquisition, it should be returned to its owners. This provision existed in the UPA bill, which has been modified in NDA’s bill.

The Paksha also demanded that the government should not allow the change of purpose for acquisition.

“In the event any change is proposed, government shall notify and the farmer will be entitled for revoking his consent or additional compensation as per market value,” it said while red-flagging the acquisition of fertile land.

“Never acquire the fertile land except for military or high priority projects in the interest of the national interest,” the Paksha said.