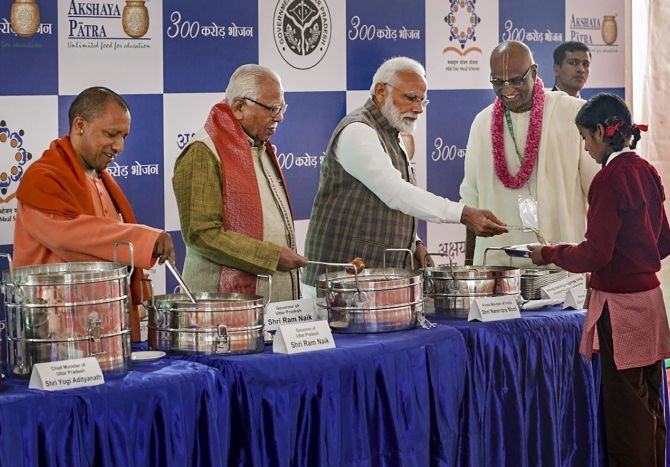 IMAGE: Prime Minister Narendra Modi, UP Governor Ram Naik and Chief Minister Yogi Adityanath serve food to underprivileged children during a programme organised to mark the serving of the 3rd billionth meal by the Akshaya Patra Foundation, in Vrindavan near Mathura, on Monday. Photograph: PTI Photo

Extolling the cow as a mother, Prime Minister Narendra Modi on Monday said cow has been an important part of India's tradition and culture and his government has taken several steps to improve the health of cattle.

Addressing a gathering after his first visit to Vrindavan Chandrodaya Mandir, he praised the people of Mathura-Vrindavan, saying 'gau sewa' is a tradition in the area, drawing loud cheers from his audience. They also raised slogans like 'gau mata ki jai' during the speech.

Modi stressed his government has created a 'security cover' to ensure good heath of children and mothers during the past 55 month of his rule.

"But there is another mother, who has been nourishing us for ages. I want to express my gratitude to her from the land of Gokul.

"That mother is 'gau maa'. We cannot repay the debt of cow's (gau mata's) milk. Cow is an important element of India's tradition and culture," he said.

He said his government has started the Rashtriya Gokul Mission to improve the health of cattle.

In the Union Budget, Modi said, his government also took a decision to establish the Rashtriya Kamdhenu Aayog with an allocation of Rs 500 crore for taking care of cows.

"Cows have been an important part of our culture and tradition (Gai hamari sanskriti aur paramaopra ka aham hissa rahi hai). And also an important element of the rural economy," he said.

Modi was in Vrindavan to participate in a programme hosted by Bengaluru-based NGO Akshaya Patra to mark the serving of its 3rd billionth meal.

On the milestone, he said, "We are witnessing this moment in the land of Krishna Leela."

After his address, where a massive stage had been mounted for the function, Modi served meals to a group of underprivileged schoolchildren.

He also unveiled a plaque to mark the serving of 3rd billionth meal by the NGO.

Funded by International Society for Krishna Consciousness (ISKCON), Akshaya Patra is a Bengaluru-based not-for-profit organisation that works with the government on mid-day meal schemes. It has a state-of-the-art kitchen in Vrindavan.

A silver 'patra' (container), as symbolised in the NGO's logo, was gifted to the prime minister, said Naveena Neerada Dasa, the head of strategic communications at ISKCON.

Prime Minister Narendra Modi Monday served meal to a group of underprivileged schoolchildren in Vrindavan and praised the efforts of an NGO towards eradicating hunger from the country.

The event was organised to mark the serving of the 3rd billionth meal by the Akshaya Patra Foundation.

Modi arrived at the venue in a special chopper at 12 noon and was greeted with loud cheers as he walked on to the stage.

"Donation given to deserving people without thinking is 'satvik daan' (pure charity), Akshaya Patra is doing 'satvik daan'," he said.

From serving just 1,500 children in the beginning to over 17 lakh now, the NGO is helping in the growth of the country.

After his nearly 30-minute address, he served food to the schoolchildren from Vrindavan in a special pavilion made for the purpose, behind the main pavilion.

Modi also tweeted a video clip of it and said, "Had the honour of serving food to children in Vrindavan today".

He even spoon-fed a few children and blessed them.

Earlier, a few selected school students were given a box of Akshaya Patra-shaped dry fruits items on the stage by Modi.

Rupesh, a Class 6 student, was thrilled to meet him, and told PTI, "Modi ji asked me, if I was eating well and playing regularly or not? Also, if teachers were feeding us properly in schools or not."

Ahead of arriving in Vrindavan to serve meal to underprivileged schoolchildren, Modi Monday had praised the efforts of Akshaya Patra foundation towards eradicating hunger from the country.

'Congratulations to all those associated with this mission. Their efforts towards eradicating hunger are exemplary,' he tweeted.

He also unveiled a ceremonial plaque at the event to mark the serving of '3rd billionth meal' by Akshaya Patra Foundation.

Funded by International Society for Krishna Consciousness (ISKCON), Akshsya Patra is a not-for-profit organisation that works with the government on mid-day meal schemes.

The Bengaluru-based NGO has a state-of-the-art kitchen in Vrindavan and Modi served food to children near the facility.

Modi said the work done by the foundation is one of the best examples of 'the journey showing the 'me-to-we' transition'.

The centralised kitchen located the Mandir's campus caters to government schools in Mathura-Vrindavan as part of the mid-day meal scheme.

A silver 'patra' (container), as symbolised in our logo, was gifted to the prime minister, the spokesperson said. 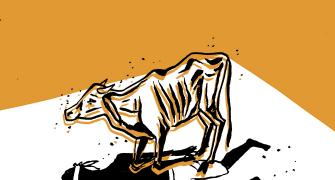 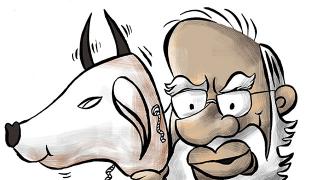 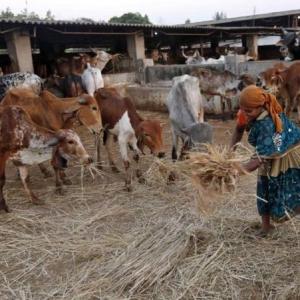