News
Business
Movies
Sports
Cricket
Get Ahead
Money Tips
Shopping
Sign in  |  Create a Rediffmail account
Rediff.com  » News » Covishield to be priced at Rs 400 to states; Rs 600 to pvt hospitals

Covishield to be priced at Rs 400 to states; Rs 600 to pvt hospitals

Serum Institute of India's Covishield vaccine will cost private hospitals Rs 600 per dose and state governments Rs 400, a rate which will also apply to central government procurement once the existing contract for Rs 150 a dose ends, its chief executive said on Wednesday. The world's largest vaccine maker announced pricing of AstraZeneca shots it manufactures at its Pune facility, following the government decision to open up inoculation to all citizens above 18 years of age.

"Going ahead, 50 per cent of our capacities will be served to the Government of India's vaccination program, and the remaining 50 per cent of the capacity will be for the state governments and private hospitals," the Serum Institute of India said in a statement.

With government giving manufacturers and importers pricing freedom, SII said Covishield vaccines will be priced at Rs 400 per dose for state governments and Rs 600 for private hospitals.

The pricing, however, came in for sharp criticism from Opposition parties who saw no logic in charging state governments higher rates when the Centre was getting the same vaccine at Rs 150 per dose.

SII CEO Adar Poonawalla later told CNBC-TV18 that the central government too will be charged Rs 400 once the initial contract for 100 million doses ends.

"Let me clarify, it is not a different price. All government prices will be Rs 400 henceforth for new contracts," he said.

"Please understand the Rs 150 price which is being thrown around has been for the central government for prior commitments and contracts. After that ceases to exist, after we supply about 100 million doses to them, which was ordered in bulk a long time ago, we will also charge Rs 400 to any government," he said.

So, after opening up of the policy, "the new price to the government is Rs 400 and for private hospitals it is Rs 600," he said. "Also to put it in context, it is half or one-third the price of most global vaccines."

The previous pricing, Poonawalla said, was given without even knowing if the vaccine will work and it was a "risk sharing price" that was agreed for a limited amount of quantities.

"Now that the vaccine is licensed and is showing good efficacy, we have now announced, based on the new policy of the government, these prices," he said.

He also said SII will be able to raise its monthly output of the AstraZeneca-Oxford University COVID-19 vaccine to 100 million doses by July from 60-70 million now, later than a previous timeline of end-May.

India initially immunised the most vulnerable, but broadened that to anyone over 45 years on April 1 because of a surge in cases. It has now allowed all citizens over 18 years of age to get vaccinated from May 1.

In the statement, the company also said for the next two months, it will address the issue of limited capacity by scaling up vaccine production.

Considering the global vaccine prices, "we are ensuring that our vaccines are affordable in comparison to any other vaccines in the world", SII said.

"... owing to the complexity, and urgency of the situation it is challenging to supply it independently to each corporate entity. We would urge all corporate and private individuals to access the vaccines through the state facilitated machinery and private health systems," SII said.

After 4-5 months, the vaccines will be made available in retail and free trade, it added.

The vaccine major said it welcomes the recent announcement made by the Ministry of Health and Finance Ministry to accelerate India's vaccination drive.

"The promising directives will help to scale up vaccine production, and allow state governments, private hospitals, and vaccination centers to procure vaccines directly," it added.

On Tuesday, Poonawalla had tweeted, "On behalf of the vaccine industry in India, I would like to thank and applaud Shri @narendramodi Ji, @nsitharaman Ji, for your decisive policy changes and swift financial aid which will help vaccine production and distribution in India."

Covishield comprises over 90 per cent of the 12.76 crore COVID-19 vaccines administered across the country so far, according to government data on Wednesday.

According to sources, the government is likely to waive 10 per cent customs duty levied on imported vaccines in a bid to keep the cost of overseas jabs low. The overseas vaccines are being eyed to supplement
domestically made shots ahead of the opening of COVID-19 vaccination to all citizens over 18 years of age.

Source: PTI  -  Edited By: Hemant Waje© Copyright 2021 PTI. All rights reserved. Republication or redistribution of PTI content, including by framing or similar means, is expressly prohibited without the prior written consent.
Related News: Serum Institute of India, Covishield, COVID
SHARE THIS STORY
Print this article 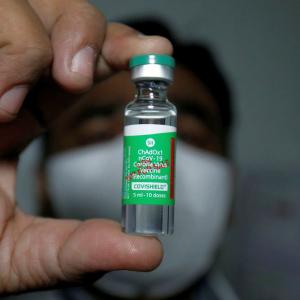