Eight BJP-ruled states have fully vaccinated 50 per cent of their eligible population with the coronavirus vaccine and seven of them have inoculated 90 per cent people with the first dose, numbers not yet achieved by any state ruled by the Congress and its allies, official sources said Monday. 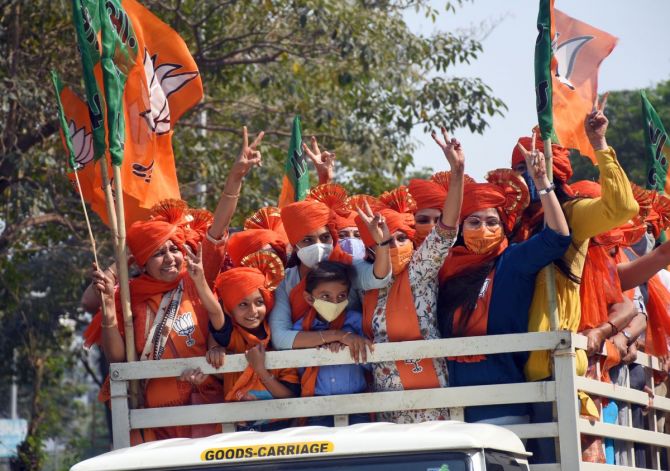 With some Opposition-ruled states pushing for booster doses, sources said it was ironical as they have not been able to vaccinate enough people so far, in stark contrast to the performance of BJP-ruled states. They also wondered if politics has impacted the vaccination drive in these states.

The BJP has repeatedly accused Opposition parties of trying to politicise the drive and noted that some rival leaders had even initially questioned the government for its approval of two vaccines manufactured in India.

Sharing vaccination figures, sources said the percentage of population vaccinated with the first and both doses in Jharkhand is 66.2 and 30.8 and in Punjab 72.5 and 32.8 respectively.

The Congress is in power Punjab, Chhattisgarh and Rajasthan. It is part of the DMK-led ruling alliance in Tamil Nadu and the JMM-led government in Jharkhand. The Trinamool Congress, a key opposition party but not a Congress ally, is in power in Bengal.

In contrast, BJP-ruled Himachal Pradesh and Goa have fully covered their eligible population with the first dose of Covid vaccine and 91.9 per cent and 87.9 per cent people with both doses respectively.

All these states are ruled by the BJP.