The Mumbai police, who are on toes in view of the intelligence inputs about a possible terror attack by Khalistani elements, on Friday appealed to citizens to remain indoors and avoid New Year parties. 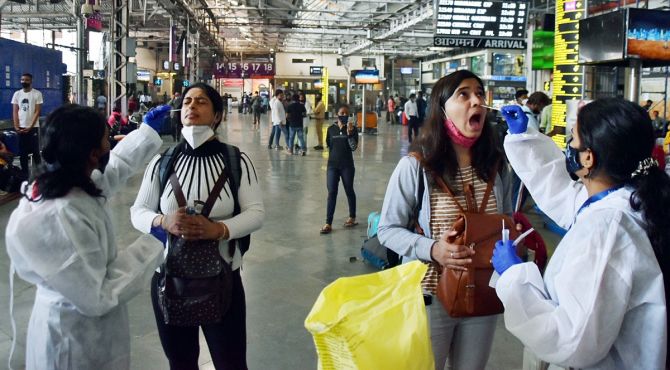 The police have beefed up security at prominent railway stations and other key locations in Mumbai in view of the intelligence inputs about the terror threat.

The weekly offs and leaves of the police personnel have also been cancelled so that the entire force remains available to maintain law and order on the New Year eve, officials have said.

Besides that, in the wake of emergence of the Omicron variant of coronavirus, the city police have prohibited New Year celebrations and gatherings in any closed or open space, including hotels and restaurants.

The order to this effect was issued on Wednesday under Section 144 of the Code of Criminal Procedure.

Taking to Twitter to urge people to avoid parties, the Mumbai Police said, "When your 'F.R.I.E.N.D.S' ask what your New Year's Eve plans are tonight. You being a responsible citizen: I don't even have a 'pla'."

The tweet uses a snap that shows Lisa Kudrow, a female actor from this popular series, lying back relaxed and sipping some beverage with a straw.

"What's Not Up tonight? - Irresponsible party plans!," said the Mumbai police in another tweet with a five-second GIF.

Another tweet shows a WhatsApp conversation between two friends, in which one asks the other, "Bro, Aaj ka kya scene, Where to celebrate New year?"

Replying to it, his friend posts the news of prohibitory orders issued by the Mumbai police, which mentions a ban on New Year parties, to which the first person responds saying, "Oh, Okey" with an emoji of a face with rolling eyes.

In yet another tweet, the police used images of prominent places in the city, where people gather in large numbers to ring in the New Year, with hashtag #StayIndoors #CelebrateSafety #31stDecember.

The tweet shows pictures of Gateway of India, Marine Drive and Chowpatty with messages - 'Gateway' of safety', 'Home, Go home, back up the road 'Lokhandwala', "Don't line up at 'Marines'", "Chow-Party' with your family" and "Hope you 'sea' the 'link' between our request & your safety!"
Replying to a Mumbai Police's tweet , a user named Akash Bharadwaj said, "Celebrating with Mom and Dad after 12years . It took a pandemic to make me realise that I was never home for NYE".