Delhi Deputy Chief Minister Manish Sisodia, admitted to hospital due to the coronavirus infection, was also diagnosed with dengue on Thursday and his condition took a turn for the worse, sources said. 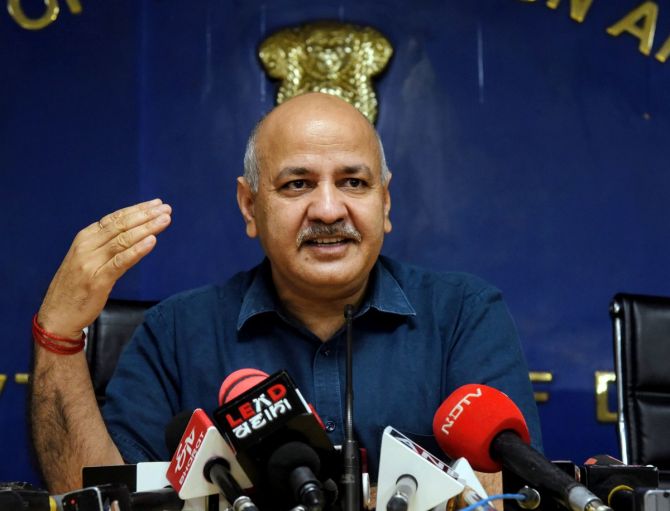 Sisodia was moved to the private Max Hospital in Saket from the Delhi government-run LNJP Hospital in the evening, considering his 'falling' blood platelet count and low oxygen level, they said.

He was admitted to Max Hospital ICU. They said the deputy CM's platelet count was around one lakh in the evening as against the normal rage of 1.5-4.5 lakh per microliter of blood.

Sisodia is perhaps the first prominent personality in Delhi to have contracted a 'double infection' of the novel coronavirus and dengue.

He is the second minister in the Arvind Kejriwal government to contract COVID-19 infection after Health Minister Satyendar Jain.

The health minister had tested positive for COVID-19 in June and was hospitalised.

He was later administered plasma therapy.

The deputy chief minister, who had tested positive for COVID-19 on September 14, was admitted to the LNJP Hospital on Wednesday after he complained of fever and low oxygen level.

Earlier, an official said that the minister had been put on oxygen support as per requirement and had been under constant observation at the LNJP Hospital, which is a dedicated COVID-19 facility.

Sources at LNJP Hospital earlier said, 'There is no standard protocol for treatment of double infection of COVID-19 and dengue, and treatment is 'patient-specific'.'

Earlier in the day, a doctor said, 'The deputy CM will be administered an RT-PCR test in a couple of days.'

Another source said that the minister's age, condition, co-morbidities and other factors will be taken into account for treatment of both the ailments, adding that right now, his condition is being assessed.

Asked if there are any side effects of treatments in cases of a 'double infection', the source, said, 'any treatment can have a side effect, but the treating doctor decides the methodology for it'.

A dengue patient, if his or her platelet level falls dangerously below the normal level, needs external platelet infusion.

Asked if the 48-year-old Aam Aadmi Party leader has any co-morbidities, a doctor, also a senior official said, "He has hypertension".

Earlier in the day, in a video message, Sisodia praised the efforts made by doctors at the LNJP hospital.

"I have been brought to the LNJP Hospital after a need was felt for it. But, seeing the spirit with which the doctors and other healthcare workers are serving patients, I must say, as a deputy chief minister, it is very encouraging," he said.

"It is a wonderful facility here and I am very proud of them. If you need any medical attention in this coronavirus time, LNJP is ready to serve you," the minister said.

Sisodia was unable to attend the one-day Delhi Assembly session on September 14 since he had tested positive for the disease.