COVID: Pak bars international flights as cases up to 625

Pakistan on Saturday suspended all international flights for two weeks and curtailed train services as the coronavirus cases surged to 625 in the country after more pilgrims who returned from Iran tested positive for the deadly virus, which has turned into a major global crisis. 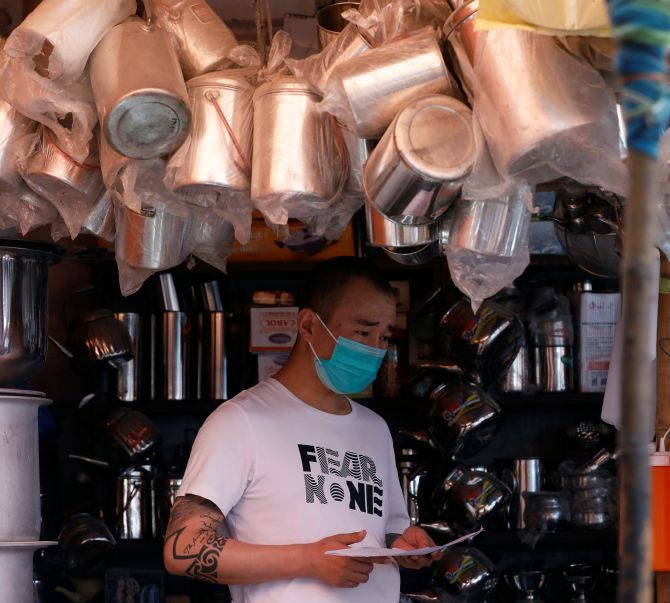 IMAGE: A man wears a protective mask following an outbreak of the coronavirus disease while shopping at a market in Karachi, Pakistan. Photograph: Akhtar Soomro/Reuters

National flag-carrier PIA however will be allowed to bring back its planes. Cargo flights will also be allowed.

Earlier on Saturday, PIA had said all international departures were being suspended till March 28.

Railway Minister Sheikh Rashid Ahmad ordered to reduce the number of trains running in the country from March 25 until the middle holy month of Ramadan, which would start around April 25.

"We have decided to suspend 34 trains out of total 142 running in the country while another eigh trains will be suspended from April 1," he said.

The government announced the measures as the number of confirmed cases in the country jumped to 625 on Saturday.

The worst-affected Sindh province reported 90 new coronavirus cases, taking the provincial tally to 357. The new cases have been detected in pilgrims who returned from Iran and have been quarantined in Sukkur, according to a spokesperson for the Sindh health department.

The number of COVID-19 patients in Balochistan rose to 104; 96 in Punjab; 27 in Khyber-Pakhtunkhwa; 21 in Gilgit-Baltistan; 10 in Islamabad; and one in Pakistan-occupied Kashmir.

So far, three patients have died in Pakistan while five have recovered.

Pakistan reported the third casualty from the virus in Karachi on Friday, two days after two men -- both pilgrims returning from Iran and Saudi Arabia -- died of the coronavirus in Khyber-Pakhtunkhwa.

The 70-year-old who died in Karachi was a cancer survivor. He had other medical problems like hypertension and diabetes but did not have any travel or contact history, officials said.

Special Assistant to the Prime Minister on Health Dr Zafar Mirza has said that all provinces of the country now have laboratories where coronavirus tests can be done. Speaking at a press conference, Mirza said that the number of labs would increase in the future.

Pakistani Prime Minister Imran Khan on Friday ruled out total lockdown but asked people to reduce unnecessary travel and go for self-quarantine for at least another 45 days to help tackle the coronavirus crisis which has killed over 11,000 people and infected 250,000 worldwide.

Pakistan, despite its close proximity with China, remained unscathed by the virus until February 26 when a man from Karachi tested positive for the novel coronavirus, the Express Tribune reported. The man, in his twenties, had returned from Iran, which is also one of the worst-hit countries.

After a brief pause following the first case, COVID-19 cases witnessed a sharp surge as more pilgrims returning from Iran tested positive despite the fact that they were quarantined for 14 days at the Pak-Iran border crossing of Taftan in Balochistan.

Amid an imminent threat of spread of coronavirus, the Islamabad high court has ordered the release of under-trial prisoners detained in Rawalpindi's overcrowded Adiala jail in minor crimes and directed the Islamabad police not to make arrest in petty matters, the Dawn reported.

The Lahore high court has summoned the first meeting of its Crisis Management Committee on March 24.

The government has exempted import of 61 diagnostic support and personal protective equipment from all duties and taxes for a period of three months in order to reduce the rising prices in the domestic market.

The government has also allowed the use of non-utilised amount of the World Bank-funded projects worth $40 million for purchase of COVID-19 equipment.

The provincial government of Balochistan has decided to impose a 21-day partial lockdown across the province to control the spread of highly contagious disease.

Under the lockdown, which is similar to the restrictions imposed by the Sindh government, all major shopping centres, markets and food restaurants will remain closed. However, food delivery will be allowed during the lockdown.

Pakistan Prime Minister Khan while addressing the media in Islamabad on Friday had said the country's strategy is a little different from a complete lockdown, considering Pakistan's socio-economic realities.

"Pakistan isn't a rich country like Italy, where people can get through a sustained period without economic activity," he said.