Nearly 14 lakh people were inoculated against COVID-19 on March 4, the highest in a day so far, taking the total number of vaccine doses administered in the country to over 1.8 crore, official sources said on Friday. 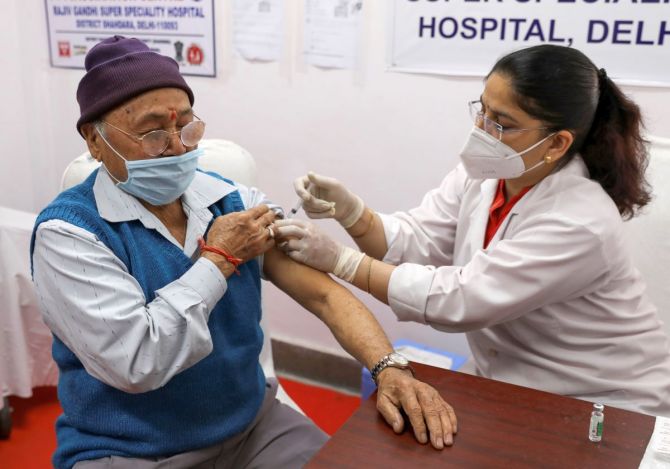 IMAGE: A man receives a dose of COVISHIELD during a vaccination drive for people above 60 years of age and those who are 45 or more and suffering from certain medical conditions, at a medical centre in New Delhi. Photograph: Anushree Fadnavis/Reuters

From March 1, as many as 2,35,901 beneficiaries more than 45 years old with specific co-morbidities and 16,16,920 people aged more than 60 years have received anti-coronavirus vaccine dose, it stated.

On Thursday, day 48 of the nationwide COVID-19 vaccination drive, 13,88,170 people were inoculated. This was the highest number of vaccination recorded in a day so far, an official said.

The cumulative number of COVID-19 vaccine doses administered in India has crossed 1.8 crore, the Union health ministry said on Friday. It added that on Thursday, 10,56,808 beneficiaries were vaccinated across 16,081 sessions for the first dose and 3,31,362 healthcare and frontline workers received the second dose of the vaccine.

It underlined that 84.44 per cent of the 16,838 new cases reported in the country in a day are from these six states. Maharashtra continued to report the highest daily new cases at 8,998, followed by Kerala with 2,616 and Punjab 1,071 fresh instances of the viral infection.

While Kerala, Tamil Nadu and West Bengal have shown a reduction in active cases in a span of 24 hours, Maharashtra, Punjab, Madhya Pradesh, Haryana, Delhi and Gujarat display an upward trajectory during the same time period, the health ministry said.

Twenty states and Union Territories have less than 1,000 active cases with Arunachal Pradesh reporting just two active cases. The Cumulative Positivity Rate of the country showed a steady decline and stood at 5.08 per cent.

The ministry said that six states accounted for 88.5 per cent of the 113 deaths reported in a day. Maharashtra saw the most 60 fatalities followed by Punjab where 15 people succumbed to the disease in a day. Kerala reported 14 deaths during the same period.