COVID effect: No motorcycle stunts at R-Day parade this year

Due to COVID-19 safety norms gravity-defying stunts by motorcycle-borne men, a major attraction for the crowd at Republic Day celebrations on the Rajpath, will be missing this year, while the spectator size too has been reduced to 25,000, officials said on Friday. 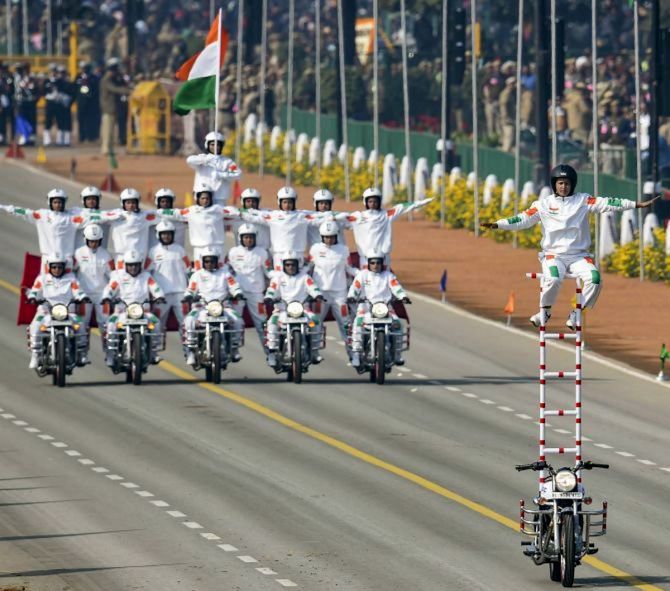 Besides this, the parade of gallantry awardees and children who have earned bravery awards will also not be there at the 72nd Republic Day event, on account of social distancing, they said.

Also, there will be no chief guest at the event this year.

"This year's Republic Day is very different as it is happening amid the coronavirus pandemic. Like in Independence Day, all chairs in enclosures will be placed following social distancing norms. So the crowd size has come down to 25,000 this time from around 1.25 lakh last year or some of the previous years.

"The number of enclosures has also been halved to just 19," said a senior official who is privy to the arrangements.

Due to the same reason, the popular motorcycle stunts performed by army or paramilitary personnel, which draw loud cheers from the crowd every year, will not be happening this year, he said.

"These decisions have been taken because it is not possible to maintain social distancing while performing group stunts or awardees riding a jeep together during the parade," the official said.

The number of mediapersons invited to the ceremonial event has also been reduced, he added.

A total of 32 tableaux -- 17 of various states and UTs, nine of ministries and six from defence arm -- will roll down Rajpath. The contingents will stop at National Stadium this year instead of following the regular route all the way to the Red Fort, officials said.

"Also, the size of marching contingents has been reduced from regular 144 to 96 so that they can maintain social distancing," the senior official said.

Members of the tableaux contingents from various states, ministries and government departments underwent COVID-19 test at a cultural camp in Delhi Cantonment on Friday, officials said.

COVID-19 safety norms will be strictly in place throughout the event.

A military band from the Bangladesh Army will also take part in the parade. This year, Bangladesh marks the 50th anniversary of its Independence.

Tableau from a total of 17 states and UTs, including, Gujarat, Assam, Tamil Nadu, Maharashtra, Punjab, West Bengal, Uttar Pradesh, Ladakh and Delhi will be part of the parade.

The Gujarat contingent is lead by Pankaj Modi, who is the Deputy Director in the Gujarat government's Information Department and also the younger brother of Prime Minister Narendra Modi.

The young union territory of Ladakh is all set to make its debut in the extravaganza on Rajpath with a beautiful tableau depicting the iconic Thikse Monastery and its rich cultural heritage.

"There will be nine tableau from ministries, including Ministry of Culture, Ministry of Electronics and IT, Ministry of Ayush, Ministry of Information and Broadcasting; and six from the defence arm, including of IAF, Navy, Indian Naval Coast Guard, two from the DRDO and one from BRO (Border Roads Organisation)," the official said.

The tableau of the Department of Biotechnology will showcase the efforts made by scientists to manufacture COVID-19 vaccine indigenously.

The tableau would depict various stages of pre-trial and trial phases of vaccine, a scientist from the DBT said during a media preview held at a camp at Delhi Cantonment.

The Ministry of Information and Biotechnology will depict the 'Vocal for Local' initiative of the government.

The tableau of Indian Sign Language Research and Training Centre, under the department of empowerment of persons with disabilities of the ministry of social justice and empowerment, will showcase the unifying nature of the sign language.

The heritage of the Ayodhya, a replica of the Ram temple being built, a glimpse of 'Deepotsav' and various stories from Ramayana epic will be showcased in the tableau of Uttar Pradesh.

Punjab tableau will depict the 400th anniversary of Sikh Guru Sri Guru Tegh Bahadur while and Gujarat tableau will showcase the ancient Sun temple of Modhera in Mehsans district near Gandhinagar.

Delhi tableau will depict the pedestrianisation work carried out under a project of the Shahjehnabad Redevelopment Corporation.