A longer shelf life is critical, given many makers have started manufacturing vaccines and stockpiling them, so as to make them available in the market immediately after approval, reports Sohini Das. 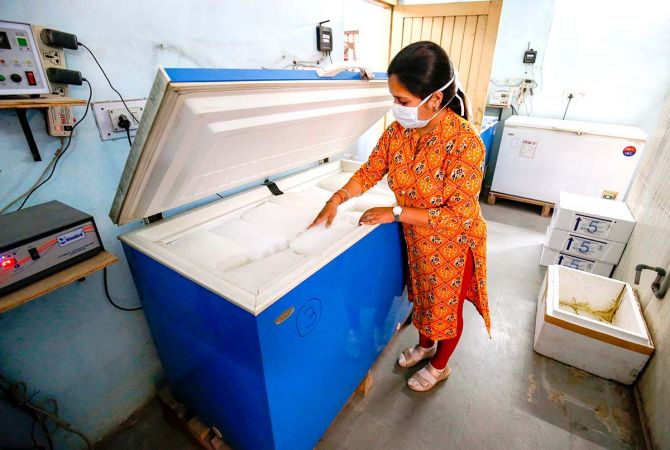 IMAGE: A medic checks the temperature of ice packs in a deep freezer at a COVID-19 vaccine storage facility in Ahmedabad. Photograph: PTI Photo

Unlike the COVID-19 drugs, such as Remdesivir and Favipiravir, which were allowed only a three-month shelf life after they got restricted emergency-use authorisation from the Indian regulator, vaccines now may be allowed a longer shelf life, revealed people in the know.

Vaccine makers have been conducting early animal testing since May/June.

They have the stability data for these investigational products, said a source.

"The vaccines will be allowed a shelf life of six months or more since the makers have the data for this period," said a pharmaceutical executive.

The stability of a drug or vaccine refers to the extent to which a drug substance retains the same properties and characteristics it possessed at the time of its manufacture.

This is used to determine the shelf life or expiration dates of drugs.

A longer shelf life is critical, given many makers have started manufacturing vaccines and stockpiling them, so as to make them available in the market immediately after approval.

Around June, repurposed drugs like Remdesivir (originally developed for ebola by Gilead Sciences, Inc.) and Favipiravir (for influenza) were given restricted emergency-use authorisation by the Drugs Controller General of India.

At that time, these drugs were allowed a shelf life of just three months.

Only Dr Reddy’s Laboratories, which brought the innovator drug Avigan (Favipiravir) under a licensing agreement with FUJIFILM Toyama Chemical Co, got a shelf life approval of two years.

“This was done because there was not enough stability data from the makers of Remdesivir and Favipiravir here. The shelf life has been extended once more data was made available,” added the executive.

While the regulator is considering allowing a longer shelf life, thanks to long-term stability data the makers have, the vaccine developers, on their part, are also aiming at less stringent temperature norms for stability.

Ahmedabad-based Zydus Cadila said its vaccine candidate ZyCoV-D can remain stable even at a room temperature of 30 degrees Celsius for three months.

Pankaj Patel, chairman of Zydus Cadila, said, “We feel this is a very stable vaccine and will not need 2-8° Celsius, but can remain stable even at 30° Celsius for about three months at least.”

At a cold-chain temperature of 2-8° Celsius, ZyCoV-D can be stable even longer.

This can be a major factor when planning a nationwide vaccine distribution initiative as it would have minimal cold chain requirements when it reaches the hinterland.

Gennova Biopharmaceuticals, too, has been able to develop a messenger ribonucleic acid (mRNA) candidate that will remain stable at 2-8 degree Celsius unlike global mRNA candidates (Pfizer-BioNTech and Moderna) that require sub-zero temperatures to remain stable.

Since RNAs are highly unstable, they require sub-zero temperatures to avoid disintegration.

Gennova has managed to crack this through genetic engineering.

There are well-known technologies like lipid coating, etc, that can help with stabilisation.

A senior government official noted that having less stringent temperature requirements is a major factor in ensuring safe distribution to the remote parts of the country and will play a crucial role when the government picks a candidate for national immunisation.