The Centre stressed that the next three weeks will be critical for the country reeling from the worst health crisis as it announced a series of measures to shore up medical infrastructure and supplies and scale up vaccination.

After Delhi, Jharkhand declared a one-week lockdown from April 22, while Maharashtra indicated a similar step soon.

The decision by the Uttar Pradesh government came as the Supreme Court granted an interim stay on its plea against the Allahabad high court order directing lockdown till April 26 in five cities.

The state government held that it has taken several steps to contain the spread of coronavirus the high court order would create immense administrative difficulties.

Night curfew has already been imposed in Uttar Pradesh and several other states including Punjab, Rajasthan, Kerala, Odisha, parts of Chhattisgarh and Madhya Pradesh and the Union Territory of Jammu and Kashmir.

However, there was no sign of the COVID wave ebbing as several states like Rajasthan, Odisha, Andhra Pradesh and Kerala recorded the highest daily rise on Tuesday.

Registering a steady increase for the 41st day in a row, the active cases increased to 20,31,977, comprising 13.26 percent of the total infections, while the national COVID-19 recovery rate has dropped to 85.56 percent.

Expressing concern over the worrying scenario during a review meeting with Union Territories, Member (Health) NITI Aayog V K Paul pointed out the criticality of the next three weeks for COVID response measures.

In Jharkhand, Chief Minister Hemant Soren announced the decision to enforce a lockdown from April 22 to April 29 and said the period will be observed as "health safety week".

He said the cabinet decided to cancel class 10th exam of the state board. Scores of other states have also scrapped the class 10 exams this year.

The CBSE too had cancelled the class 10 exam while another central board ICSE announced the decision on Tuesday.

Maharashtra has been reporting over 50,000 coronavirus cases every day during the last two weeks but people are flouting the existing restrictions on movement and gatherings, the minister said.

The Telangana government announced a night curfew in the state between 9 PM and 5 AM till April 30, following a surge in coronavirus cases.

The restrictions will come into effect from April 20.

The state has imposed lockdown-like restrictions, called "public discipline fortnight", from Monday till May 3.

The Madhya Pradesh government has directed that only 10 percent of employees will attend office, except in units engaged in essential services like water and electricity supply, fire brigade, police, health etc, while the remaining employees will work from home.

In the private sector, this rule would apply to all establishments, except IT, mobile phone and BPO firms.

The Assam government ordered that all markets and shops will shut by 6 PM.

The government permitted 50 percent of lower-level staff to work from home in the districts having active coronavirus cases of 100 or more. The orders will remain effective till April 30.

Odisha's COVID-19 tally soared to 3,77,464 on Tuesday as the state registered its highest single-day spike of 4,761 new cases, while five fresh fatalities pushed the coronavirus death toll to 1,953. 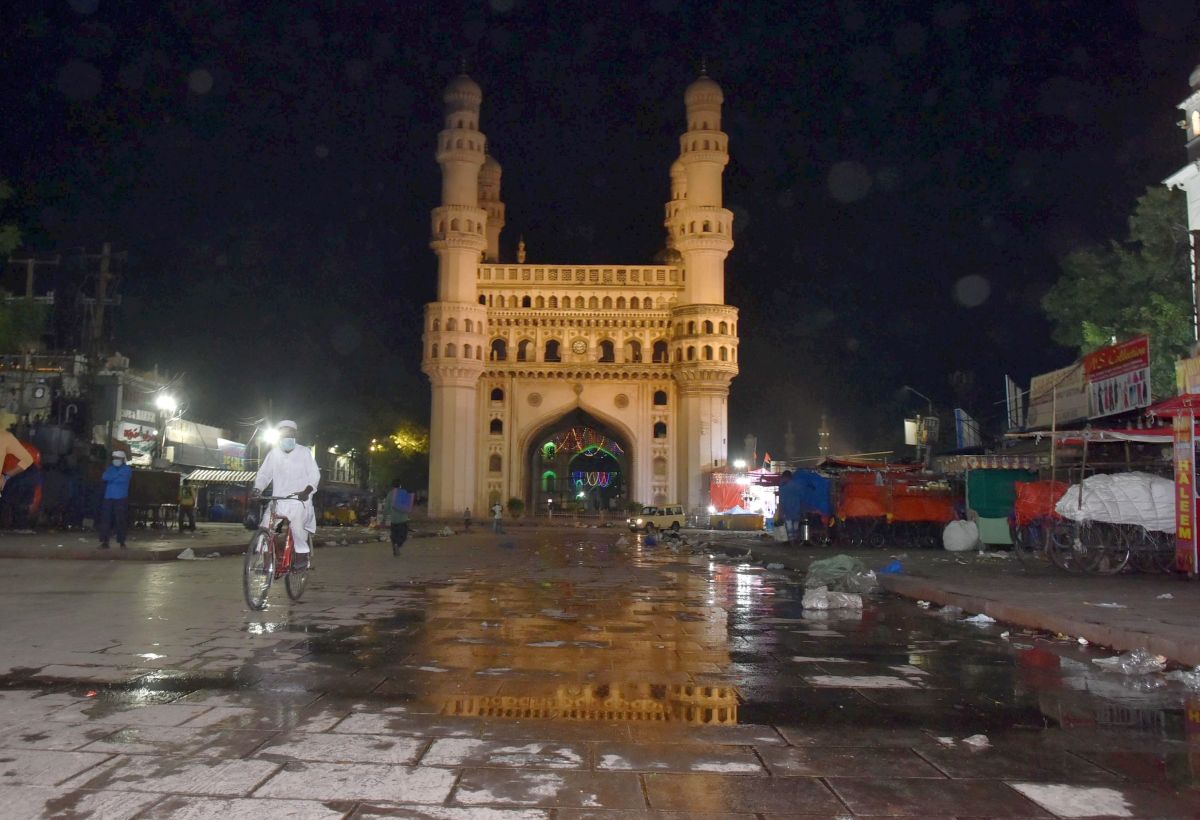 IMAGE: A view of historic Chaar Minar in Hyderabad during the night curfew. Photograph: PTI Photo

Defence Minister Rajnath Singh asked defence public sector undertakings, Defence Research and Development Organisation and Ordnance Factory Board to work on a war footing to provide oxygen cylinders and extra beds to state governments at the earliest to help them in dealing with the surging cases of COVID 19.

Officials said the DRDO has already shared with private industry its oxygen generation technology which was developed for use on board Light Combat Aircraft Tejas,

Looking to ramp up supplies ahead of the opening of Covid-19 vaccination to all citizens over 18 years of age, the government has approved a payment of about Rs 4,500 crore as advance to vaccine makers like Serum Institute of India and Bharat Biotech against future supplies, sources said.

SII will supply 200 million doses and Bharat Biotech is to supply another 90 million doses to the government by July at a pre-agreed rate of Rs 150 per dose.

The government on Monday allowed citizens over the age of 18 years to receive Covid-19 vaccination from May 1 as it seeks to control the rapid spread of the virus.

Delhi Chief Minister Arvind Kejriwal urged the Centre to provide medical oxygen to Delhi, saying it was an "emergency" as some hospitals were going to run out of it in a few hours.

"Serious oxygen crisis persists in Delhi. I again urge the Centre to urgently provide oxygen to Delhi. Some hospitals are left with just a few hours of oxygen," the chief minister tweeted.

In neighbouring Haryana, a massive surge of 73,000 new COVID-19 infections has been witnessed in less than three weeks, with Gurgaon, its worst-affected district, reporting more than 20,000 of these cases.

Meanwhile, the Delhi high court said that economic interests can not override human lives and suggested some reduction in steel and petroleum production to divert oxygen to COVID-19 patients.

"During lockdown, what would be the development," the court said and asked the Centre why it was waiting till April 22 to ban industrial use of oxygen.

The Bombay high court directed the Maharashtra government and the Centre to respond to a Public Interest Litigation alleging mismanagement of resources available to control the COVID 19 pandemic.

The Gujarat high court questioned the state government's claim that there were enough beds for COVID-19 patients and sought to know why infected persons were still unable to get admitted, if beds were vacant.

"Complaints are coming, maybe you are also receiving that patients are not being admitted because there is no vacancy in hospitals. Beds are not available. The figures shared by you suggest that even designated hospitals have vacant beds," the bench told the state.

Latest data showed that overall cases in India were more than 1.53 crore, making the country the second-worst affected nation after the US, which has reported more than 3.1 crore infections.

Ten states, including Maharashtra, Uttar Pradesh and Delhi, account for 77.67 per cent of the new COVID-19 infections reported in a day, the Union Health Ministry said.

Karnataka, Kerala, Chhattisgarh, Madhya Pradesh, Tamil Nadu, Gujarat and Rajasthan are among the other states in the list of 10.

Maharashtra has reported the highest daily new cases at 58,924. It is followed by Uttar Pradesh with 28,211 while Delhi reported 23,686 new cases.