But the numbers have continued to rise in 23 states including Bihar, Goa, Andhra Pradesh, Tamil Nadu and Kerala.
Ruchika Chitravanshi reports. 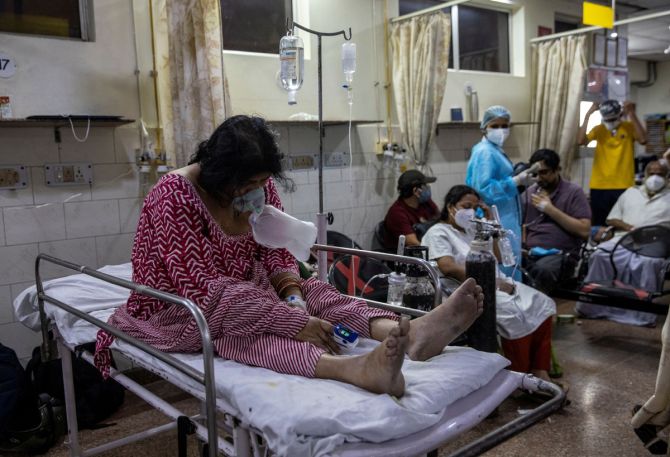 IMAGE: A COVID-19 ward at a New Delhi hospital, May 1, 2021.Photograph: Danish Siddiqui/Reuters

There are early signs of plateauing and even a decline in the daily COVID-19 infections in 13 states and Union Territories, including Delhi, Maharashtra, Uttar Pradesh, Chhattisgarh, Punjab and Madhya Pradesh, according to the Union health ministry.

'Continued efforts of containment have to be made in these states so they can preserve the gains that have been made,' Lav Agarwal, joint secretary in the health ministry, said on Monday.

Some 12 districts in Maharashtra have been showing a declining trend in the daily cases for the last 15 days.

But the numbers have continued to rise in 23 states including Bihar, Goa, Andhra Pradesh, Tamil Nadu and Kerala.

On whether the double mutant strain is more transmissible, Agarwal said, 'Mutant or no mutant, actions to control Covid remain the same. We cannot afford to be fatigued.'

In view of the rising cases, the government has announced that the services of final year MBBS students would be engaged for teleconsultation and monitoring of mild Covid cases. This was among a list of announcements made after Prime Minister Narendra Modi took a review meeting of the human resource situation for tackling the Covid crisis.

The NEET-post graduate exam has also been postponed for at least four months and would not be held before August 31.

The government has also allowed deployment of medical interns for Covid duties under the supervision of their faculties as part of internship.

Medical personnel completing 100 days of Covid duties will be given priority in forthcoming regular government recruitments.

Agarwal said that a run-away spread of infection may overwhelm healthcare infrastructure and various core capacities were needed for management of patients. 'While the government is working towards the supply side approach, it is important to focus on the demand side management in terms of infection spread.'

Vacant posts of doctors, nurses, allied professionals and other healthcare staff have to be filled through an accelerated process within 45 days through contractual appointment, the health ministry said.

Chest CT scan for patients with mild symptoms of Covid was not advisable, AIIMS chief Dr Randeep Guleria said. He said one such CT is equal to getting 300 x-rays and in younger people being exposed to such radiation can increase the risk of cancer in later life. 'Even in mild cases, some patches will come in the scan but it gets better on its own.'

Dr Guleria also said that testing biomarkers through blood samples for mild illness was also not required and should be done in moderate cases in order to avoid over-treatment.

On vaccines for those who have recovered, Dr Guleria said that while the current advice was that such patients need to take both dossion in the scientist community if only one dose would act as a booster shot.

'The infection itself could be a primer dose...The guideline as of now is that you should take both doses if you have recovered from Covid,' he said.