COVID-19 situation in Delhi is not terrible: Kejriwal

Chief Minister Arvind Kejriwal on Wednesday said the COVID-19 situation has been brought under control for now with the "combined efforts" of Delhi government, Centre and other organisations, but cautioned people against any lapse in social and personal behaviour that may again lead to a rise in cases. 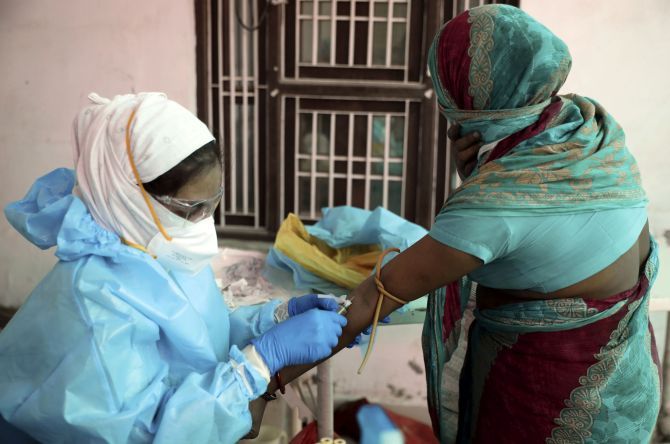 IMAGE: A health worker collects a blood sample from a woman at a health centre to conduct tests for the coronavirus disease, amid the spread of the disease, in New Delhi. Photograph: ANI Photo

Addressing an online media briefing, the chief minister said that the situation is not "terrible" as predicted one month ago, asserting that at present, the number of active coronavirus cases has been decreasing instead of increasing.

He said the central government's website had projected a total of one lakh COVID-19 cases and of these, 60,000 active cases by June 30, but the number of active cases is currently around 26,000.

"After this projection, we did not sit idle and started approaching all those who could help us in dealing with the situation. We approached hotels, banquet halls, Centre, social and religious organisations for help.

"We pleaded before all to save Delhi, where we did not get help" (Jahan madad nahi mili wahan unke per pakade)," he said.

For the last few days, the Centre has been overseeing Delhi's preparations. Recently, Union Home Minister Amit Shah announced a numbers of steps, including house-to-house survey, ramping up testing and bed capacity, to arrest the spread of coronavirus.

"In Delhi, the number of people recovering from coronavirus is also increasing. Similarly, the number of deaths is decreasing...at present, the COVID-19 situation is not terrible as much as it was earlier. This is the result of combined efforts of all," he said.

He also said that one month back, the recovery rate was around 38 per cent, but it is now 67 per cent, adding that out of a total of 87,000 cases, 58,000 people have so far recovered from the dreaded virus.

He said that the there were 8,500 beds in hospitals one month back, but the bed capacity has now reached around 15,000.

"Earlier, when we conducted COVID-19 test on 100 people, 31 came positive. Now, only 13 cases are coming positive on testing of 100 people. All these things show that the situation is now under control, " the chief minister said.

Kejriwal, however, asked people to not pay attention to experts' views on social media that the peak of COVID-19 has gone in Delhi, and requested citizens to wear masks, wash hands and maintain social-distancing norms instead.

According to him, it is the result of hard work of all and the Aam Aadmi Party government will make more efforts in the coming days.

The coronavirus recovery rate in the national capital reached 66.03 per cent on June 29 as against the national rate of 58.67 per cent, according to official figures.

In June, the national capital added over 64,000 fresh cases to its tally, while over 47,357 patients recovered, were discharged or migrated.

Delhi's recovery rate breached the 50 per cent mark on June 20, after hovering below it for almost a month. 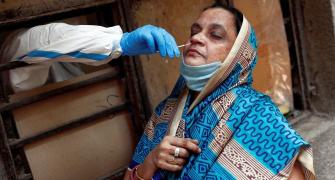 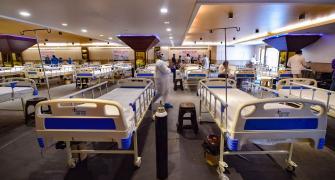 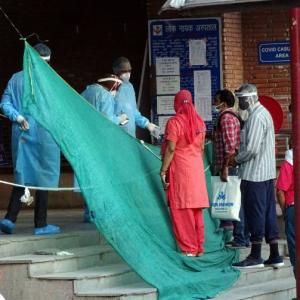