The number of the coronavirus cases in the United States crossed 7,00,000 on Friday, while over 35,000 people have died from the COVID-19 pandemic, according to data maintained by Johns Hopkins University, as US President Donald Trump assured his people that America was "very close" to seeing the light "shinning brightly" at the end of the tunnel. 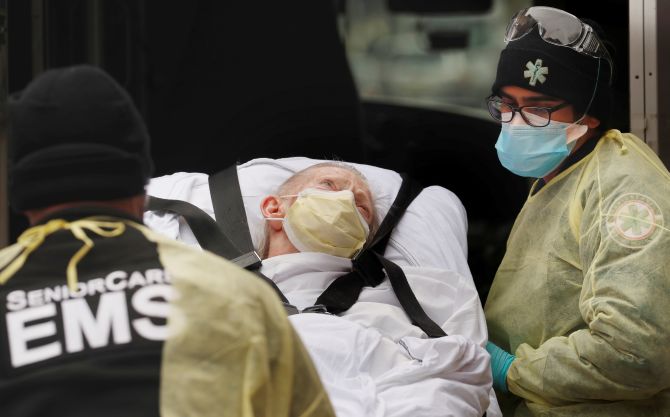 IMAGE: Emergency Medical Technicians wheel a man out of the Cobble Hill Health Center nursing home during an ongoing outbreak of the coronavirus disease in the Brooklyn borough of New York, US. Photograph: Lucas Jackson/Reuters

New York, the financial capital of the world, has emerged as the epicenter of the pandemic. More than 14,000 people have died in the city and over 200,000 lakh people have tested positive so far. Neighbouring New Jersey has more than 78,000 cases and 3,800 deaths.

US President Trump told reporters at the White House on Friday that to date the US had conducted more than 3.78 million coronavirus tests, by far the most in any country.

"It's not even close. In the hardest-hit areas such as New York and Louisiana we have also tested more people per capita than South Korea, Singapore, and every other country. The United States has the most robust, advanced and accurate testing system anywhere in the world," he said.

Trump said that the number of deaths could have been much higher if his administration had not mounted a massive effort against containing the coronavirus. Against initial estimated death of between one and two lakhs, Trump hoped that the death toll could be far less and around 65,000.

Ultimate victory in this war will be made possible by America's scientific brilliance, Trump asserted.

"There is nothing like us, there is nobody like us, not even close. I wish I could tell you stories what other countries, even powerful countries say to me, the leaders. They say it quietly and they say off the record, but they have great respect for what we can do," he said.

The last few months have been among the most challenging times in the history of the nation, Trump said.

"This invisible enemy is tough and it's smart and it's vicious that every day we are getting closer to the future that we all have been waiting for," he said.

"I talk about the light at the end of the tunnel. We are getting very, very close to seeing that light shine very brightly at the end of that tunnel and it is happening," he said.

According to US Vice President Mike Pence, despite the tragic loss of more than 36,000 Americans, the latest data show that the new cases are slow and steady on the West Coast.

"We continue to see cases and hospitalisations declining in the new greater New York City area, in New Orleans and Detroit and elsewhere," he said.

According to Johns Hopkins University, 1,54,142 people have died and 2,242,868 people have been infected by the novel coronavirus that originated in China in November last year.