Researchers have found two new mutations in coronavirus samples from Amravati and Yavatmal districts of eastern Maharashtra which can escape neutralising antibodies, a senior official said on Thrusday.

Meanwhile, authorities in the  two districts have announced strict implementation of restrictions, including a weekend lockdown in Amravati, to stem the rising cases of COVID-19. 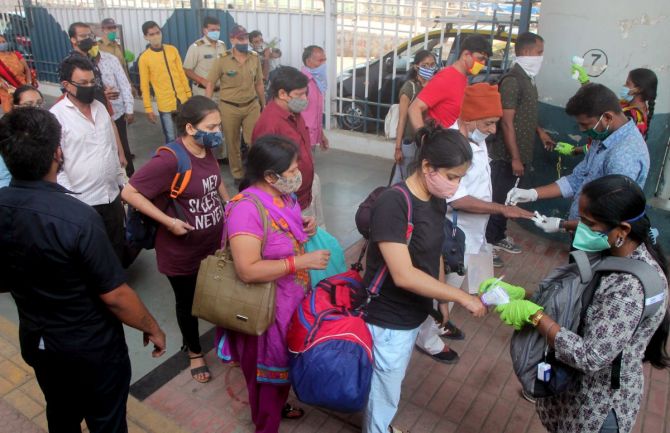 IMAGE: Passengers waiting in a queue to undergo thermal screening in the wake of the Covid-19 pandemic at Dadar railway station, in Mumbai, February 17, 2021. Photograph: Mrugesh Bandiwadekar / ANI Photo.

The administration in Yavatmal district ordered curbs on gatherings and also closure of schools (which had reopened for select classes) for 10 days, measures coming on a day when the state reported 5,427 new cases, a daily tally not seen in more than two months.

A weekend lockdown was announced in Amravati district, from 8 pm on Saturday to 7 am on Monday, a period during which markets and other establishments will remain shut, but essential services will remain unaffected.

Schools (for students from Classes 5 to 9), colleges, and coaching classes in Yavatmal district will remain closed till February 28, while only 50 persons will be permitted at weddings, Yavatmal collector D M Singh said.

Religious places will remain open but COVID-19 protocols will be strictly implemented, he said.

Hotels and restaurants will be allowed to operate between 8 am to 9.30 pm, while markets and shops will remain open till 8 pm, Singh said.

Amravati Collector Shailesh Naval said on weekdays, all establishments in the district, including hotels and restaurants, would stay open only till 8 pm (from earlier 10 pm).

Yavatmal collector Singh told PTI that they have not stopped anything in the district.

"However, strict enforcement of restrictions as per the guidelines of the Government of India and Government of Maharashtra is being implemented in the district," Singh said.

Both Amravati and Yavatmal fall in Vidarbha, a region which has been reporting a steady rise in COVID-19 cases since the start of February.

Meanwhile, Genome sequencing was done for 24 samples -- four each from Amravati, Yavatmal and Satara and 12 from Pune -- said Dr Rajesh Karyekarte, Head of Department of Microbiologyat the state-run B J Medical College and Sassoon General Hospital in Pune.

However, in none of the samples for which genome sequencing was done, the United Kingdom, South African or Brazilian strains of the virus were found, he added.

"We were asked by the state government to conduct genome sequencing of samples. The D614G strain which is prevalent was found in all the samples," he said.

But in Amravati, Yavatmal and Satara, they also came across different mutations, Dr Karyekarte said.

"In Amravati, we came across a mutation named E484K in all the four samples. When we inquired if all samples belonged to one family, we were told they were taken from different locations, so the conclusion was that it was a common mutation," he said.

The character of the strain found in Amravati is that it escapes neutralising antibodies, he said.

"In a nutshell, even if there are neutralising antibodies in the human body, the particular mutation escapes or saves itself from these antibodies," Dr Karyekarte said.

In Yavatmal samples, they found a mutation named N440K, which is commonly seen in Andhra Pradesh, he said.

"It was also found in a case of re-infection in Delhi. This mutation too can escape the neutralizing antibodies and cause re-infection," he added.

In Satara sample, a new mutation named V911I was found but the researchers could not find significant scientific references about this mutation in published journals, he said.

All these strains are of A2 type of coronavirus, which is common in India.

Maharashtra on Thursday reported over 5,000 new cases after a gap of 75 days.

Dr Murlidhar Tambe, Dean of B J Medical College and Sassoon General Hospital, said these 'small curves' (spurts in infections) are happening due to lax behavior as gatherings, weddings and various functions are happening and no physical distancing is being followed.

They have received six samples for genome sequencing from Akola where a spike has been witnessed, he said.

Chief Secretary Sanjay Kumar also wrote to collectors of the three districts to declare areas having high prevalence of COVID-19 as containment zones to check further transmission of the disease.

Yavatmal collector Singh said the number of COVID-19 cases in the district had been increasing since February 1.

Almost 80 to 90 per cent of new cases were being reported from Yavatmal, Pandharkawda and Pusad cities, he said.

"We have decided to conduct around 500 tests per day in Yavatmal, Pandharkawda and Pusad municipal corporations. Today we are ordering lockdown in Yavatmal district till February 28," Singh said.

"In view of a spurt in COVID-19 cases, I have decided to impose a weekend lockdown in Amravati district. To avoid any stricter lockdown in the future, I appeal to people to follow COVID-19 appropriate behaviour," Collector Shailesh Naval said.

Naval said during the weekend lockdown all markets and other establishments will remain shut.

"Swimming pools and indoor games, too, will remain closed, while only five people will be allowed at religious ceremonies," Naval said.

According to the government, Amravati and Akola cities reported 542 and 152 COVID-19 fresh cases, respectively, on Thursday.

The Akola circle, which covers the three districts besides Buldhana and Washim, reported 1,258 cases -- second only to the Mumbai Metropolitan Region, which saw a rise of 1,432 patients during the day.

According to an official statement, the daily COVID-19 positivity rate of Akola is 32 per cent, while the same for the week is 24 per cent.

The daily and weekly positivity rate of Amravati district is 48 per cent and 35 per cent respectively, the statement said.

Yavatmal's daily and weekly positivity rate is 15 per cent, the statement said.

Maharashtra's daily and weekly positivity rate is 8.8 per cent and 7.76 per cent, respectively, it said.

There is a need to take care given the way the number of cases is going up (of late).

"District collectors have been ordered to take necessary steps to contain the spread of the disease or control the number of patients there, Transport Minister Parab told reporters.

In his letter to the three collectors, Chief Secretary Kumar noted that an upsurge is being seen in COVID-19 positive cases in Achalpur taluka and Amravati city (Amravati district) and areas under Yavatmal, Pusad and Pandharkawada municipal councils in the Yavatmal district.

Similarly, the Akot and Murtizapur talukas and Akola city in Akola district too have seen upsurge in COVID-19 cases, Kumar observed.

In the light of above, you are directed to declare the above mentioned affected areas as Containment Zones in order to check further transmission of the COVID-19 virus.

Detailed orders regarding permissible and non-permissible activities as well as taking up all requisite precautionary measures in the said zones may be issued by you (district collectors) immediately, the chief secretary said.

In the statement, the government asked the authorities to increase contact tracing in districts which are more affected.

It has ordered authorities to test at least 20 to 30 close contacts of a patient and bring down the positivity rate to less than 10 per cent.

Instructions have been issued to carry out 20 times more tests in areas where a new patient is found and to conduct RT-PCR test of patients with symptoms, the statement said.

The government has also asked local administrations to spray disinfectants at places like public toilets and bus and railway stations.

The administration should ensure that the attendance for social, religious and political events is limited and physical distancing and mask norms are adhered to strictly.

Earlier in the day, Chief Minister Uddhav Thackeray held a meeting in Mumbai to review the situation in the Vidarbha districts.

Speaking to reporters before the meeting, Deputy Chief Minister Ajit Pawar noted that, till January-end, the number of COVID-19 patients discharged from hospitals post recovery was higher, while the number of positive patients reported in the entire state was less.

But from February 1, the positive cases started increasing in different areas (of the state). In Amravati division, it is more evident, Pawar said.

The government last month extended the coronavirus- induced lockdown in the state till February 28, even as a lot of restrictions have been eased in the last few months. 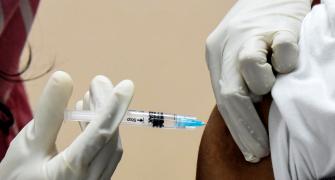 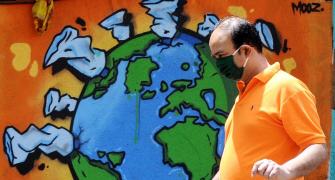 Over 15L caught without masks in Mumbai since Apr 2020 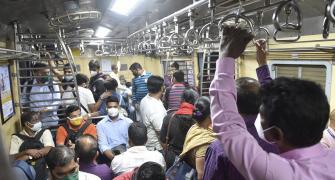 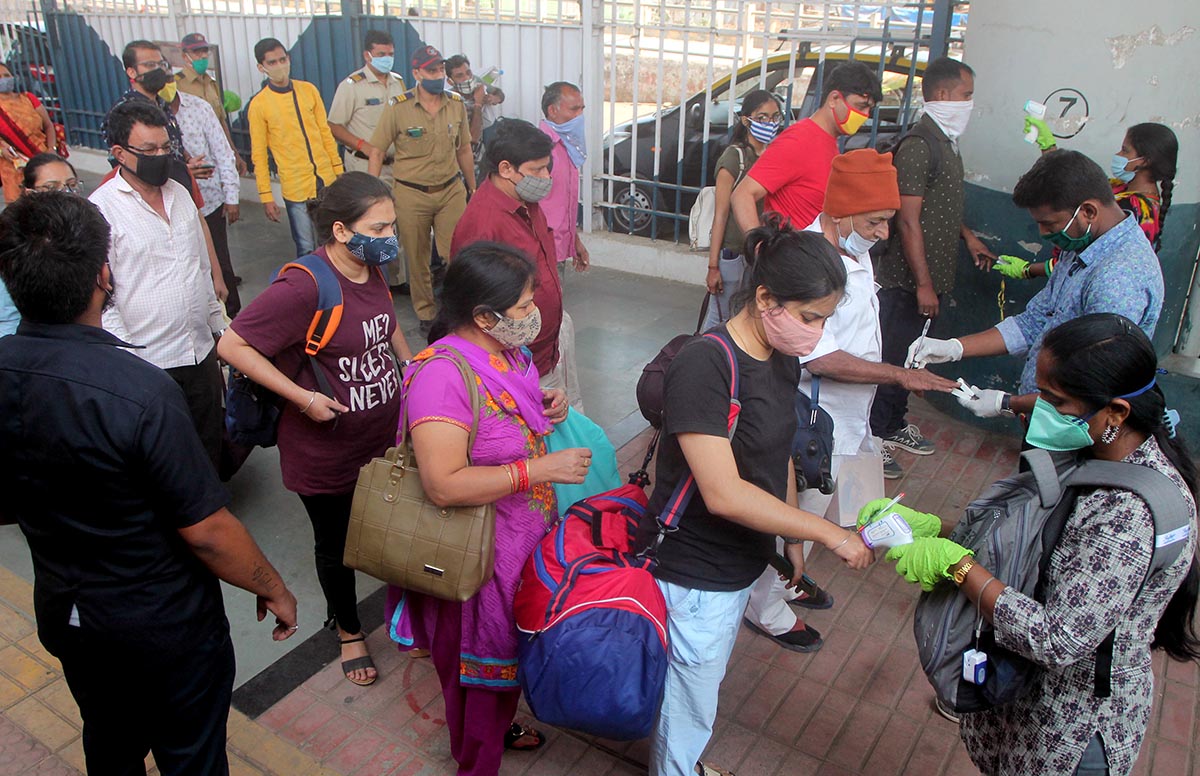 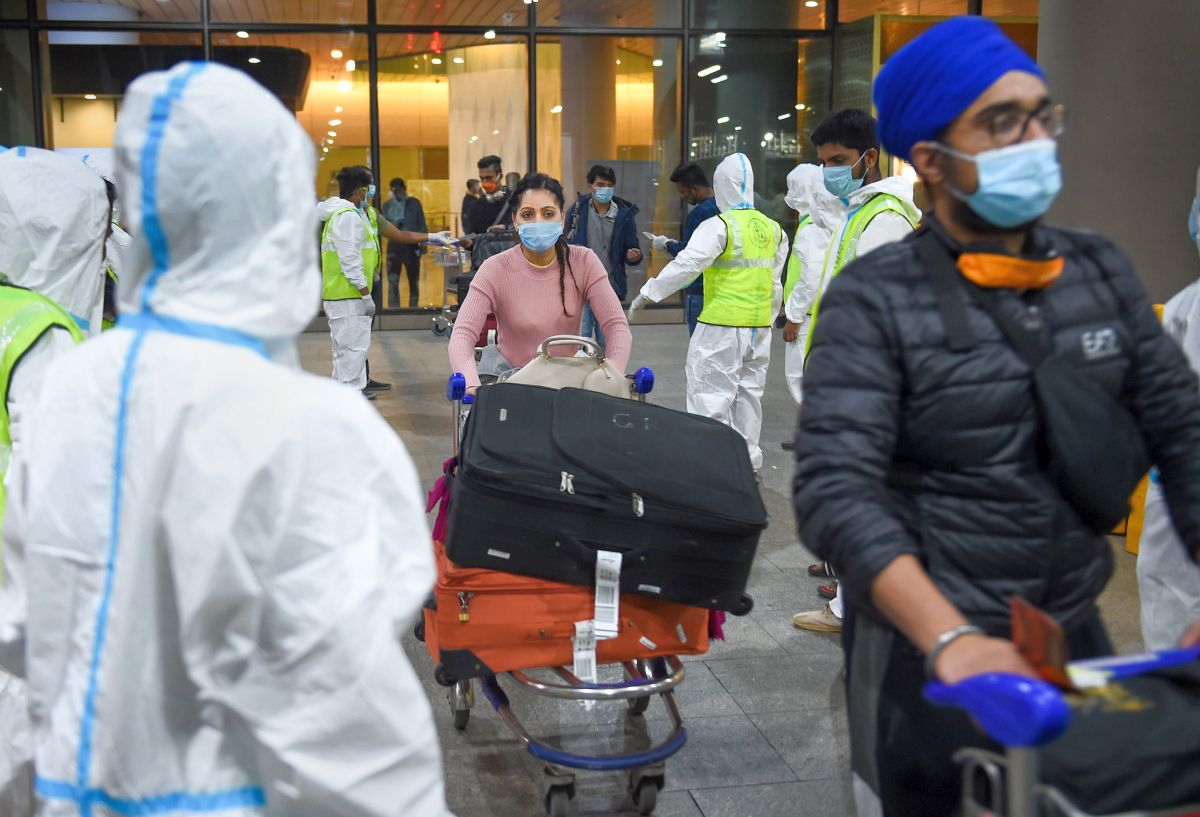