A Delhi court on Saturday took cognisance of the National Investigation Agency chargesheet against Pakistani-American David Headley Coleman and eight others for allegedly carrying out several terror attacks in India.

The court has issued process to procure the presence of four accused, including Headley and his Pakistani-Canadian accomplice Tahawwur Rana for March 13.

Besides the four, the court has issued non bailable warrants returnable for March 13, against the other five accused named in the charge sheet.

The special NIA Judge H S Sharma had reserved its order on February 4 after hearing arguments of NIA on the chargesheet.

The NIA had accused 51-year-old Headley, Rana, Lashker-e- Tayiba founder Hafiz Saeed and six others for planning and executing terror strikes in India, including the 26/11 Mumbai attack.

Earlier, the NIA had told the court that Headley's wife had congratulated him for the success of the November 26 terror attack in Mumbai.

The agency said his wife had e-mailed Headley saying "he has graduated and she was proud of him" and that she had watched the show (attack) for the whole day.

had also gone to Pakistan several times where he also met Pakistan Army official Major Iqbal, co-accused in the case.

The NIA had on December 24 last year filed the voluminous chargesheet against Headley, Rana, Saeed and others.

Headley was hailed by wife for successful 26/11: NIA 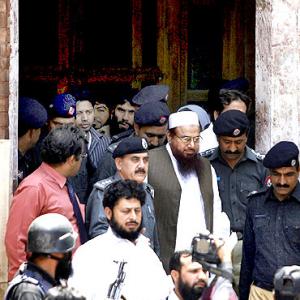