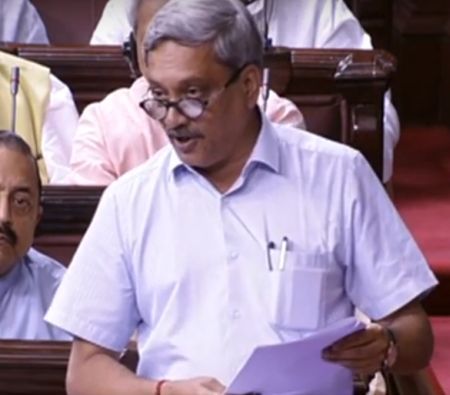 Targeting the previous United Progressive Alliance regime over the controversial AgustaWestland deal, Defence Minister Manohar Parrikar on Wednesday said the ongoing probe will focus on those named in the Italian court judgement even as he suggested the role of an "invisible hand" in preventing a proper investigation earlier.

He, along with Parliamentary Affairs Venkaiah Naidu, rejected the opposition demand for Supreme Court-monitored probe, after that the Congress staged a walkout.

Replying to a debate in Rajya Sabha on the controversy surrounding the Rs 3600 crore deal for 12 VVIP helicopters, Parrikar said there was "relentless push" by the UPA to go in for the AgustaWestland choppers.

Narrating amid repeated disruptions the sequence of events related to the deal, he said that the Central Bureau of Investigation had registered a case on March 12, 2013 but it did not bother to forward a copy of the FIR to the Enforcement Directorate for nine months.

"It appears an invisible hand was guiding action or inaction of the CBI and the ED," the minister said.

Noting that a probe was already underway, he said, the "inquiry will focus on roles of those named in the judgement of Italian court. The Government will leave no stone unturned in bringing to justice those involved in the scam."

He said that the CBI has already done a lot of investigation and is currently on the money trail to track down where the bribe money went.

"Pursuant to the judgement of the Milan appelate court, the defence ministry has written to both the ED and the CBI to take into account contents of the judgement and conclude the investigations expeditiously," Parrikar said.

He added that the defence ministry is initiating the process of blacklisting the companies concerned and for legal proceedings for recovery of damages.

Beginning his speech by promising to not take names so that there is no disturbance, the defence minister mentioned an anecdote of Birbal related to a "theft" to suggest that the Congress was unnerved, fearing the truth would implicate it.

"The country wants to know who instigated, supported and benefited from the corruption. We cannot let this pass," Parrikar said.

He added that the fact that there was corruption in matter is brought out in extensive details in recent judgments of Milan court.

"A litany of omissions and commissions at various stages of the decision making process indicate malafide and corrupt actions, driven by a goal to favour a particular vendor," the defence minister said.

Hitting out at the UPA government, he said the field trials of the chopper were conducted in Italy even though it was necessary for it to be held in Indian conditions.

Parrikar said the helicopter offered by AgustaWestland was still in "development stage" and hence the trials were conducted on a different helicopter.

He took a dig at former Defence Minsiter A K Antony who had said he had written down his objections of trials, saying he is aware as it was Antony's "habit" to do so.

Parrikar said even though the reports of wrongdoings and unethical conduct by Finmeccanica, the parent company of AgustaWestland had surfaced in 2012, followed by arrest of its CEO, the action of putting on hold all procurement cases with the accused group of companies in pipeline was approved by Antony only on May 12, 2014 towards the fag end of the its government.

"It was the present government which finally issued the order on July 3, 2014," he said.

Parrikar also quoted from a file about IAF's noting about chopper flights in Gulmarg and Srinagar, which he said was "luckily saved from devastating fire" on June 3, 2014.

"It was kept in an officer's drawer rather than in open," the defence minister said.

Parrikar alleged that instead of taking action against the company, the UPA wrote to the external affairs, embassy and the court.

"It took nearly two years to cancel the contract and too primarily as a response to an arbitration request by the supplier. In fact the delivery of the first three aircraft could have been avoided," he said.

The minister also alleged that choppers were bought at inflated prices and no realistic basis for price negotiations was provided.

Mincing no words, Parrikar alleged that IDS Infotech, one of the companies selected for offsets, was used as a conduit for bribe money.

There must be robust rationale for deviation from policy," Parrikar said. "The benchmark cost given was unreasonably high and had provided no realistic basis for price negotiations," he added.

He said that at various stages from March 2005, despite specific directions to the contrary, requirements were changed and processes influenced to make AgustWestland the "only alternative".

He added that there was suspected benchmarking of procurement costs which may have led to acceptance of materially overpriced supply agreements.

As Parrikar was reading out his reply from a prepared text, Congress members raised objections but Kurien ruled that a minister has all the right to read from a prepared speech.

Congress Deputy Leader in the House Anand Sharma, quoting Rule 167-177, said, "When a discussion is raised, the minister should respond to members. He is not responding to us. He is reading Akbar-Birbal story. This is just mockery of rules. What is he doing?"

Sharad Yadav of Janata Dal-United said, "I have no objection to the written statement. I have problem with the lengthy statement."

He said the reply should be short as the whole country is listening to his reply. "If he wants to keep it lengthy, let him lay it on the table."

To this, Parrikar said that the reply will be lengthy if he had to respond to all points raised by the opposition during four-hour debate.

As noisy scenes continued, Kurien said, "I cannot ask minister how to reply. The minister can always prepare the speech and read it. If the minister wants to reply to each point, he can do."

Leader of opposition Ghulam Nabi Azad also said, "The minister can read out. This is four and half hour discussion. All members have put their view points. Now, the minister is reading. It is insult. If he has to read it out, he should have circulated it."

To this, Parliamentary Affairs Minister Venkaiah Naidu said, "This is a short duration discussion. It is normally for two and half hours. Since everyone wanted to speak, the time was extended. If the minister wants to share all information, he can speak for an hour. Truth is unfathomable. Ex-minister speaks for one hour, Parrikar has spoken only for 25 minutes."

As the defence minister gave details of the deal, Sharma again rose saying, "You are misleading the House". Even Azad said, "Minister is stating wrong".

To this, the chair said, "If minister is misleading, you can invoke the rule."

After the minister's reply, Azad said his party leaders are facing allegations.

"May be the BJP must be indulging in propaganda. It is a matter of safety of our country. My hopes were belied. The minister made the worst kind of speech. Entire speech was rebuttal. It was full of allegations without facts and degrade the House. This is insult to the House," he said.

Tapan Sen of Communist Party of India-Marxist said the CBI probe, which is going on, should be monitored by the Supreme Court.

Azad also then said the probe should be Supreme Court-monitored.

To this, Parrikar said the CBI has already made a lot of progress in the probe.

Naidu, also while rejecting the demand, said that when the probe by CBI was without any monitoring by the Supreme Court during the UPA rule, how could the Congress ask for it now.

Unhappy with this, the Congress members then staged a walkout. 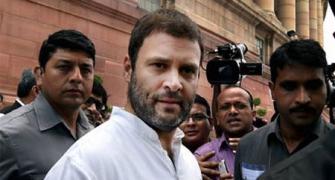 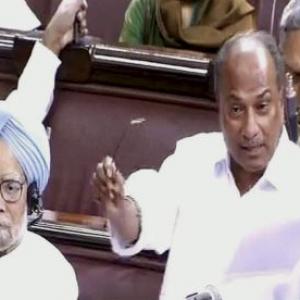 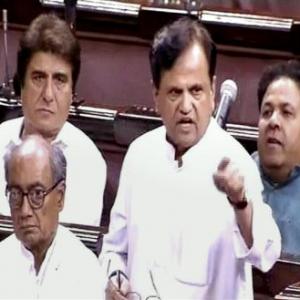