BJP blighted in bypolls, loses all 3 Lok Sabha seats in UP, Bihar

The party had one small reason to cheer as it managed to retain the Bhabhua assembly seat in Bihar. 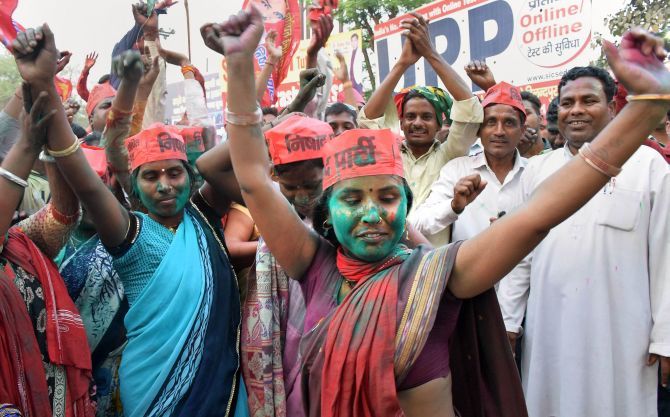 IMAGE: It's time to dance and celebrate for SP workers after the party managed to pull off a shocking win over the BJP in the bypolls. Photograph: PTI Photo

In a stunning blow to the Bharatiya Janata Party ahead of the 2019 general elections, the party on Wednesday lost bypolls to all three Lok Sabha seats it contested, including its bastion Gorakhpur, and Phulpur in Uttar Pradesh, besides Araria in Bihar.

The shocker for the BJP came days after its surprise win in three northeastern states, including Tripura, where it scripted history, demolishing the Left citadel of 25 years and forming its first government in the state. Together with its regional allies, the BJP also formed its governments in Nagaland and Meghalaya.

A consolidation of OBC, Dalit and Muslim votes powered Samajwadi Party candidates to victory in Gorakhpur, a seat represented by Chief Minister Yogi Adityanath for five successive terms, and Phulpur, which elected his deputy Keshav Prasad Maurya in the 2014 Lok Sabha polls. BJP had won Phulpur for the first time.

Both of them had won their seats by margins of over 3 lakh votes. 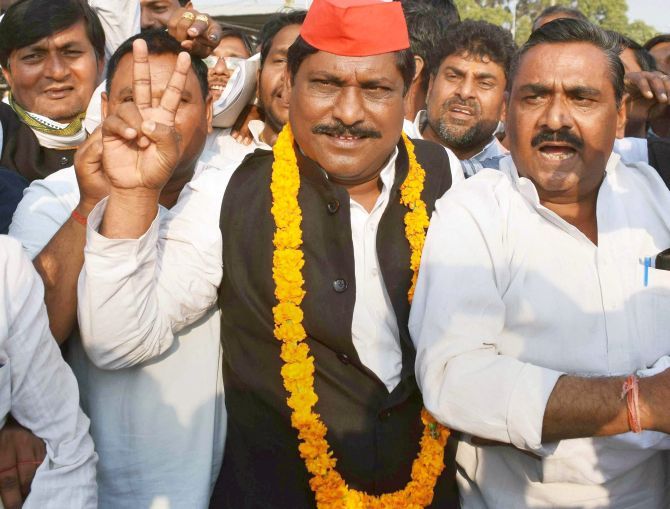 IMAGE: SP's Pravin Nishad defeated BJP’s Upendra Dutt Shukla by 21,961 votes in Gorakhpur, the seat which was with the party since 1989. Photograph: PTI Photo

Samajwadi Party’s Pravin Nishad defeated BJP’s Upendra Dutt Shukla by 21,961 votes in Gorakhpur, the seat which was with the party since 1989, while Nagendra Pratap Singh Patel of SP clinched the Phulpur seat drubbing the saffron party’s Kaushalendra Singh Patel by 59,460 votes.

Lalu Prasad’s Rashtriya Janata Dal retained the Araria Lok Sabha seat where its nominee Sarfaraz Alam beat BJP’s Pradeep Kumar Singh by over 60,000 votes, in a setback for the Janata Dal-U-BJP alliance, which went to the hustings for the first time after Nitish Kumar returned to the NDA fold. 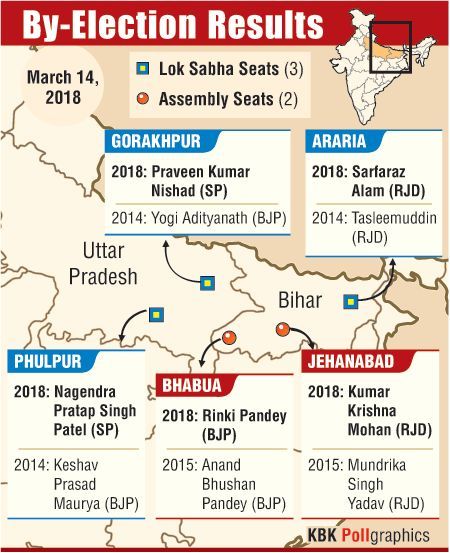 In small consolation for the BJP, its candidate Rinki Rani Pandey retained the Bhabhua assembly seat for the party, defeating her Congress rival Shambhu Singh Patel by about 14,000 votes.

The RJD retained the Jehanabad assembly seat, with its nominee Suday Yadav defeating his JD-U rival Abhiram Sharma by more than 30,000 votes.

Buffeted by the surprise defeat, Adityanath attributed it to “overconfidence” of the party and called for an in-depth analysis of the causes.

“We failed to understand the implications of this alliance between Samajwadi Party and Bahujan Samaj Party that are as different as chalk and cheese in the middle of the elections as part of bargain for the Rajya Sabha elections,” he said. The SP is backing BSP candidate for the coming Rajya Sabha polls in the state. 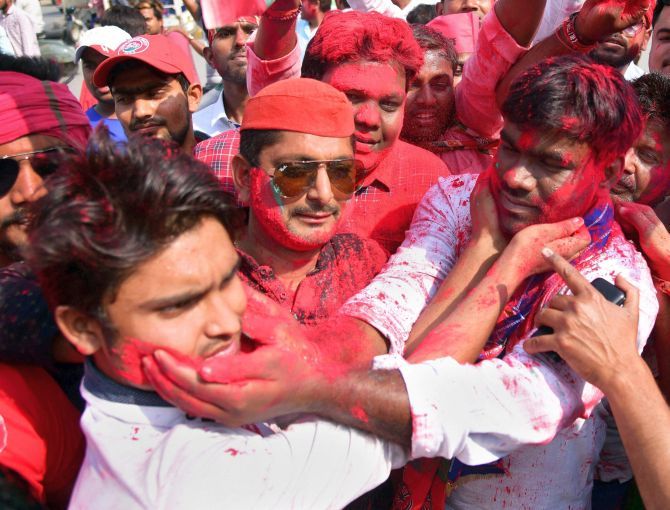 The SP’s victory reminded many of the triumph of the now defunct JD-U-RJD-Congress Grand Alliance in Bihar which had trounced the BJP-led NDA in 2015.

The victory was attributed to the consolidation of OBC and Muslim voters in favour of the Grand alliance after the two major parties -- JD-U and RJD came together.

In Uttar Pradesh, besides the BJP, the SP and BSP are major protagonists in the political arena. The SP and BSP had formed a coalition government in the state in 1993 when the BJP, despite emerging as the single largest party following the demolition of the Babri mosque, failed to get a majority.

In Gorakhpur, a consolidation of OBC-Dalit-Muslim votes, which used to get split between the SP and BSP, besides the support of smaller entities like the Nishad Party and Peace Party, worked wonders for the Samajwadi Party candidates. The Nishad Party holds considerable influence over the fisherfolk community in the belt, while the Peace Party is a force to reckon with among Muslims in the area. Keshav Prasad Maurya said the SP’s victory was the result of BSP’s ability to transfer its votes to the former. 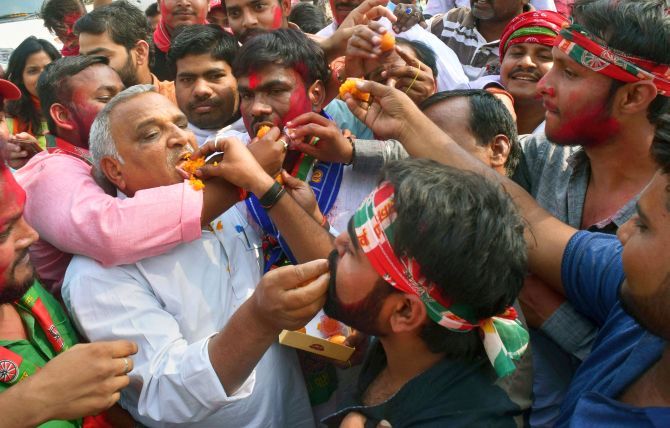 IMAGE: Samajwadi Party chief Akhilesh Yadav termed the victory as one of “social justice” and profusely thanked the BJP for it. Photograph: PTI Photo

The bypoll victories may now nudge the secular parties to forge a broad alliance of anti-BJP forces at the national level before the general elections. Leaders of 20 opposition parties, including the SP and BSP, had congregated at United Progressive Alliance chairperson Sonia Gandhi’s residence on Tuesday night to explore such a possibility.

Congress president Rahul Gandhi described the results as a reflection of public anger against the BJP.

“Congratulations to the winners of today’s by-elections. It is clear from the results that voters have a lot of anger towards the BJP and will vote for any non-BJP candidate who has more chances of winning. The Congress is keen on rebuilding the party in Uttar Pradesh, but that will not happen overnight,” he tweeted in Hindi.

Samajwadi Party chief Akhilesh Yadav termed the victory as one of “social justice” and profusely thanked the BJP for it. 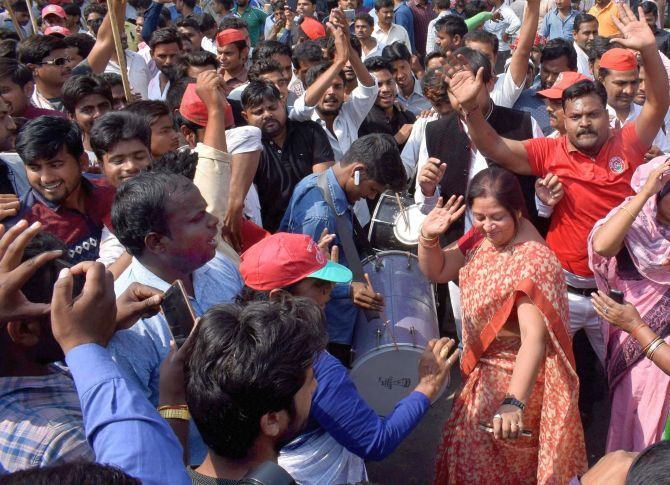 IMAGE: Congress president Rahul Gandhi described the results as a reflection of public anger against the BJP. Photograph: PTI Photo

The BJP had scored a thumping victory in Uttar Pradesh in the 2014 Lok Sabha polls, and together with ally Apna Dal, won 73 of the states 80 seats. The NDA allies had polled 43.3 per cent votes.

The SP had pocketed 22.2 per cent votes and won five seats, while the BSP failed to open its account despite polling 19.6 per cent votes. The combined percentage of votes polled by the two parties was marginally less than the NDA’s at 41.8 per cent.

As the BJP reviews the causes for the shock defeat and goes back to the drawing board to finetune its strategy for the 2019 elections, Wednesday's victory gave its rivals, beset by a string of defeats, a reason to smile, and forge closer ties to take on the NDA.