United Progressive Alliance candidate Pranab Mukherjee is all set to be elected the 14th President of India on Sunday when the counting of votes will take place.

Mukherjee's path to victory has been ensured with all the UPA partners and major outside allies like Samaj Party and and some Opposition parties backing him in the election in which he is pitted against former Speaker P A Sangma.

Congress-led UPA has claimed Mukherjee will win around 70 per cent of the votes in the direct contest with Sangma, who is backed by some Opposition parties.

The counting of ballots of members of Parliament as well as members of Legislative Assembly from all the states will begin in the capital tomorrow morning and the result is expected by late afternoon, according to officials.

As per the norm, the ballot boxes from the states have been brought to New Delhi for the counting. The election was held on July 19.

The polling percentage has been less than expected this time with only 72 per cent of the total votes -- valued at 11 lakh -- polled. Of the total votes polled, estimated to be around 8 lakh, Mukherjee is expecting around 5.6 lakh votes.

As of now, only the vote of Samajwadi Party Chief Mulayam Singh Yadav has been declared invalid by the Election Commission on the ground that he violated the code of secrecy by revealing his vote.

Yadav had initially voted for Sangma and then torn the ballot paper when he realised his mistake. Kanu Kalsaria, Bharatiya Janata Party MLA from Mahuva in Gujarat, voted for Mukherjee and openly declared that he did so as he is unhappy with the functioning of the Narendra Modi government.

The new President will be administered the oath of office by the Chief Justice of India on July 25. 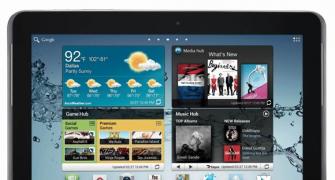