Ignoring lockdown norms, over 1,000 migrant workers who earn daily wages gathered in Mumbai on Tuesday demanding transport arrangements to go back to their native places, hours after Prime Minister Narendra Modi extended the coronavirus-enforced curbs till May 3. 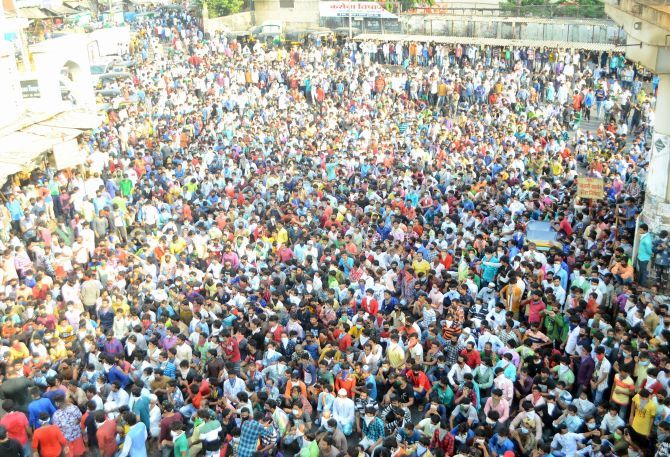 The gathering in suburban Bandra, in violation of lockdown norms, created a potential law and order situation for an overstretched police force and the men in uniform resorted to mild force to scatter the crowd.

A police official said the migrants, who assembled around 3 pm, were dispersed two hours later and have been assured accommodation and food till the lockdown lasts.

In viral videos, police were seen resorting to mild cane-charge to disperse the migrants, who had gathered at the bus depot near the Bandra railway station in suburban Mumbai.

Most of these migrant workers were from Uttar Pradesh, Bihar and Bihar, and they reside in nearby slums and other areas on rent.

Shah stressed that such events weaken India's fight against coronavirus and the administration needs to stay vigilant to avoid such incidents.

"The home minister spoke to the Maharashtra chief minister and expressed concern over the large gathering of people in Mumbai's Bandra area," a home ministry official said.

Shah also offered his full support to the Maharashtra government in dealing with the situation, the official said.

Police authorities heaved a sigh of relief as no untoward incident occurred at the site, where more than 1,000 people were estimated to have been present.

The daily wage earners were demanding arrangement of transport facilities so that they can go back to their native towns and villages.

The gathering in Mumbai came close on the heels of a violent protest last week by migrant workers in Surat, who, too, were demanding that they be sent back to their native places.

Daily wage workers have been rendered jobless ever since the lockdown was announced late last month to stem the spread of COVID-19, making their life a constant struggle.

Though authorities and NGOs have made arrangements for their food, most of them want to go back to their native places to escape the hardship brought by the sweeping curbs on movement of people. Train and bus services were suspended as part of the lockdown exercise.

Maharashtra home minister Anil Deshmukh said the migrant workers who gathered outside Bandra railway station might have expected that the PM would order reopening of state borders.

They were told by the police that borders are not going to be opened and the situation was now under control, Deshmukh said.

The migrants were assured that the state government will make arrangement of food and accommodation for them, following which the crowds dispersed, the minister said.

The gathering triggered a blame-game between the Shiv Sena-led government and the opposition Bharatiya Janata Party.

Tourism minister Aaditya Thackeray blamed the Centre for the protest by the migrant workers and sought a road map to facilitate their journey back to their native places.

In a series of tweets, Thackeray said, "The current situation in Bandra, now dispersed or even the rioting in Surat is a result of the union government not being able to take a call on arranging a way back home migrant labour."

"They don't want food or shelter, they want to go back home," Thackeray said.

He said feedback from all migrant labour camps is similar -- that these workers want to go back to their native places.

"Many are refusing to eat or stay in these camps," he said.

Currently, more than six lakh people are housed in various shelter camps across Maharashtra, he added.

Describing the Bandra gathering as an intelligence failure, former BJP MP Kirit Somaiya said the state government should explain how so many people gathered at a spot despite the lockdown.

Lockdown should be made successful because it is for the safety of people, who should be provided with foods and other essential commodities at their doorstep, Shelar said.

An FIR has been registered against at least 1000 workers for assembling near Bandra railway station in defiance of the coronavirus lockdown norms, causing a public health scare, police said.

No arrests have been made yet and the workers are being identified, a Bandra police station official said.

"We have registered an FIR under sections 143 (Whoever is a member of an unlawful assembly), 147 (Punishment for rioting), 149 (Every member of unlawful assembly guilty of offence committed in prosecution of common object), 188 (Disobedience to order duly promulgated by public servant) and 186 (Obstructing public servant in discharge of public functions) of the Indian Penal Code (IPC)," he said.

Besides section 3 of the Epidemic Diseases Act has also been invoked against them, he said.

According to a police official, the daily wage earners assembled at the bus depot and squatted on the road leading to the suburban railway station.

"This is not a government failure, because we are also monitoring the situation from the very beginning. I personally distributed essential commodities to more than 50,000 people. Under such a situation police should talk politely with the common man," Siddique said.

One of the labourers, who did not reveal his name, said, NGOs and local residents are providing food to migrant workers, but they want to go back to their native states as the lockdown has affected their source of livelihood.

"Now, we don't want food, we want to go back to our native place, we are not happy with the announcement (extending the lockdown)," he said.

Asadullah Sheikh, who hails from from Malda in West Bengal, said, "We have spent our savings during the first phase of the lockdown. We have nothing to eat now, we just want to go back at our native place, the government should made arrangements for us."

Another labourer, Abdul Kayyun, said, "I am in Mumbai for last many years but have never seen such a situation. The government should start trains to shift us from here to our native place."

Hundreds of migrant workers took to the streets of Mumbra town in Thane district on Tuesday, demanding that they be sent to their hometowns in light of the COVID-19 lockdown, which has rendered them jobless.

Workers, mostly from Jharkhand, Bihar, Madhya Pradesh, and Uttar Pradesh, who live in rented accommodations, claimed house-owners were demanding rent from them and they were unable to procure essentials.