Chinese President Xi Jinping on Tuesday called the coronavirus a "demon" which should be brought under control as he met the World Health Organisation chief who assured all necessary help to contain the virus outbreak that has killed 106 people and infected over 4,500 others. 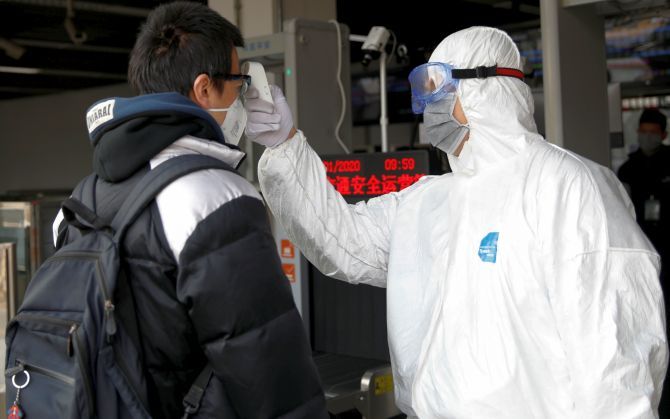 IMAGE: A worker in protective suit uses a thermometer to check the temperature of a man while he enters the Xizhimen subway station, as the country is hit by an outbreak of the new coronavirus, in Beijing, China. Photograph: Carlos Garcia Rawlins

Under stress in dealing with the spiralling coronavirus which virtually brought the whole country to a grinding halt, Xi on Tuesday got the crucial support from WHO Director General Tedros Adhanom Ghebreyesus who said the UN health body "does not recommend the evacuation of nationals, and called on the international community to remain calm and not overreact."

Ghebreyesus' remarks came as India and several other countries were preparing to evacuate their citizens from the Hubei province, the epicentre of the virus outbreak.

China has reported 24 more deaths from coronavirus, taking the number of fatalities to 106, health authorities announced on Tuesday.

A total of 4,515 cumulative confirmed cases of the new pneumonia had been reported in Hubei, while 2,567 patients are hospitalised, with 563 in severe conditions and 127 in critical conditions, the Hubei Provincial Health Commission said.

Barring Tibet, all Chinese provinces have reported the virus cases, posing a major challenge for the health authorities to contain the outbreak.

The virus, which emerged last month in Wuhan, has created a war-like situation in China, which analysts say is far worse than during the SARS or severe acute respiratory syndrome outbreak that had claimed over 800 lives in 2003.

"Chinese people are currently engaged in a serious struggle against an epidemic of a new type of coronavirus infection," Xi said.

"The epidemic is a demon, and we cannot let this demon hide," Xi told Ghebreyesus.

"And for the Chinese government, this is something that we take very seriously, because in our view, nothing matters more than people's safety and health for us," Xi said.

Ghebreyesus assured Xi all necessary help to contain the virus outbreak as he asked the global community to remain calm and not to overreact.

The government is also mobilising thousands of doctors and medical staff including the army medics to cope up with the increasing rush of cases in which there is no definitive cure yet to treat the patients.

China has full confidence and capability to win the battle against the outbreak of pneumonia caused by novel coronavirus (2019-nCoV), he said.

WHO's support at this juncture is crucial for China as few days ago the global health body considered an option of declaring the virus as a Public Health Emergency of International Concern (PHEIC), like Ebola and Swine flu.

Such designation would have had seriously dented China's image and ability as the world's second largest economy.

The WHO, after a lot of discussion, termed the risk of the virus as "very high in China, high at the regional level and high at the global level."

The virus has spread across China and to at least 16 countries globally with over 37 cases, according to the official media here.

Ghebreyesus, who is visiting Beijing for talks with Chinese officials on the crisis, appreciated China's efforts in curbing the spread of pneumonia.

During his meeting with Foreign Minister Wang Yi, Ghebreyesus said the WHO and the international community speak highly of and fully affirm the decisive measures China has taken.

Crucially from China's point of view, he said the WHO "does not recommend the evacuation of nationals, and called on the international community to remain calm and not overreact," according to state-run Xinhua news agency.

The WHO chief also praised China's system and the effectiveness of its measures "rarely seen in the world" and are "admirable."

Guterres made the remarks after he was briefed about the virus control measures by China's Permanent Representative to the UN Zhang Jun on Monday at the UN headquarters in New York.

China is also refurbishing a hospital in Beijing built during the 2003 outbreak to prepare for larger number of cases after the capital city of 20 million people reported its first death on Monday.

Chinese experts say the incubation period of the new virus was on average three to seven days, with the longest being no more than 14 days.

The National Health Commission said the coronavirus strain was 85 per cent similar to SARS.

Talking to the media here on Tuesday, Jiao Yahui, the deputy head of the NHC's medical administration bureau, said the shortage of medical supplies was a major constraint in China's efforts to contain the virus outbreak.

A risk assessment report based on the analysis of 2,744 infections recorded up to Sunday by the Chinese Centre for Disease Control and Prevention said the main route of transmission was respiratory droplets and close physical contact.

"It is very difficult to estimate when the outbreak reaches its peak. But I think in one week or about 10 days, it will reach the climax and then there will be no large-scale increases," respiratory expert Zhong Nanshan told official media.