The Centre faced growing calls for a less sweeping curbs as an anxious nation awaited Prime Minister Narendra Modi's address on Tuesday -- the last day of the 21-day coronavirus lockdown -- after a broad consensus emerged among states for extending the unprecedented measure by two weeks.. As expectations mounted that the prime minister may dwell on plans to restart economic activities in a graded manner, Tamil Nadu and Arunachal Pradesh on Monday formally announced an extension of the lockdown till April 30 taking to eight the number of states adopting this step.

The other states are Odisha, Punjab, Maharashtra, Telangana, West Bengal, Karnataka and Puducherry.

"Prime Minister Narendra Modi will address the nation at 10am on 14th April 2020," the Prime Minister's Office tweeted.

The 21-day lockdown announced by Prime Minister Modi is in place from March 25 in a bid to halt the spread of COVID-19 and is scheduled to end on Tuesday.

Lav Agarwal, a joint secretary in the Union health ministry, said 905 new COVID-19 cases and 51 deaths have been reported in the last 24 hours, taking the total number of cases to 9,352 and fatalities to 324.

In some good news, Agarwal also said 25 districts across 15 states which had detected COVID-19 infections earlier have contained the spread and reported no new cases in 14 days.

“This is a positive development," he said.

Seeking to expeditiously expand COVID-19 testing facilities, the government has identified 14 Centres of Excellence such as PGIMER in Chandigarh, AIIMS, New Delhi and NIMHANS in Bangalore to mentor all government and private medical colleges in their catchment areas to create state-of-art molecular virology setups.

In the wake of spurt in cases of coronavirus in India, the ICMR has taken into account the need to expeditiously expand COVID-19 testing facilities in all parts of the country and has initiated a proactive search of potential laboratories which could be enabled for coronavirus testing, a senior official said.

"Of these 14,855 tests took place at 156 government labs and 1,913 tests happened at 69 private labs on Sunday. There is no need to worry. We have enough stocks to conduct tests for six weeks,"the official said.

A broad consensus has emerged that the national lockdown should be extended by at least two weeks after a meeting between the prime minister and state chief ministers on Saturday.

Several chief ministers at the same time have pushed for resumption of some economic activities like in the farming sector in regions with no COVID-19 cases.

With most states favouring the lockdown to be extended at least by two weeks beyond April 14, the government is broadly focusing on a two-pronged action plan--containing the spread of COVID-19 in the country and staggered resumption of economic activities, according to an official.

The Centre's plan is seen as a nuanced change in strategy from saving lives a month ago to saving lives as well as livelihoods now in the fight against the pandemic.

States are likely to designate districts, towns and cities as red, orange and green zones depending upon the number of COVID-19 cases as part of efforts to allow differentiated restoration of normalcy with conditions like uses of masks and social distancing in public.

Union ministers and senior officials resumed working from offices in Delhi as the Centre scaled up its activities to deal with the situation arising out of the coronavirus crisis.

“The Modi government is in full action on all fronts now,” said Coal and Parliamentary Affairs Minister Pralhad Joshi.

"While an official announcement on lockdown extension is awaited, the Union government has become fully operational,” an official said.

Chief Minister K Palaniswami while announcing the extension of lockdown in Tamil Nadu said the move was in accordance with the recommendations of medical and public health experts.

The number of COVID-19 cases in Tamil Nadu crossed the 1,000 mark on Sunday and is the second worst affected state after Maharashtra.

The Centre has also sought inputs related to production, labour and logistics from clusters in five key sectors to ascertain expected output if they are made operational within a fortnight and procedural support required, official sources said.

The five sectors are textiles, chemicals, electronics, steel and pharmaceutical, the sources said.

Exporters body FIEO urged the ministry of home affairs to implement suggestions made by the department for promotion of industry and internal trade to resume limited activity in certain identified industries like heavy electricals and telecom equipment with reasonable safeguards.

Federation of Indian Export Organisations president Sharad Kumar Saraf said the list of industries, recommended by the DPIIT, has been carefully chosen to help in slowly bringing the economy on track.

The Federation of Retailer Association of India urged the government to let small shops open immediately, as the daily income flow of petty retailers has stopped completely since the lockdown, and sought compensation for their income losses.

Claiming to represent four crore micro, small and medium retailers from across the country with membership of 34 retail associations, the FRAI said all the capital of these small retailers is tied up in the stocks of unsold products because of the lockdown.

Industry chamber CII has suggested a "slow and staggered" approach to reopening various sectors based on classification of geographies as red, amber and green, depending upon the incidence of COVID-19 cases.

Textiles and apparels, pharmaceuticals, food processing, minerals and metal, besides e-commerce, automobiles and chemicals are the key sectors that need to restart operations in a calibrated manner, a CII report said.

In signs of easing some curbs, the Delhi government has decided to implement odd-even rules in all wholesale markets in the city, under which traders will sell vegetables on alternate days.

Development Minister Gopal Rai said that the timings for the sale of vegetables and fruits in these 'mandis' have been staggered to reduce crowds.

"Vegetables will be sold from 6 am to 11 am and fruits from 2 pm to 6pm in all wholesale markets in Delhi," he said.

Senior Congress spokesperson Anand Sharma urged the prime minister to be bold in declaring a financial package of at least 5 to 6 per cent of India's GDP to ensure economic recovery post COVID-19 lockdown. The current GDP is three trillion USD.

Source: PTI  -  Edited By: Utkarsh Mishra© Copyright 2021 PTI. All rights reserved. Republication or redistribution of PTI content, including by framing or similar means, is expressly prohibited without the prior written consent.
Related News: Narendra Modi, PMO
SHARE THIS STORY
Print this article 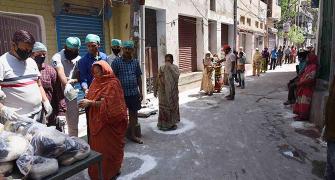