India on Wednesday recorded the highest single-day jump of 507 COVID-19 deaths and also a majority of cases--close to four lakh--in June to make it the worst month for the country prompting some states to go for varying degrees of lockdown. 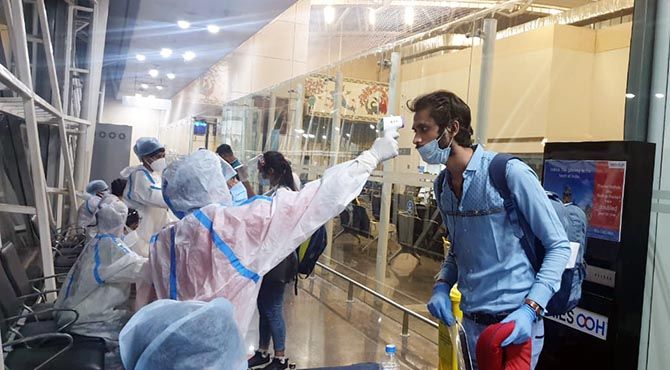 Maharashtra, Delhi and Tamil Nadu have accounted for over 70 per cent of 17,400 coronavirus deaths, according to the Union health ministry data.

At the same time, the recovery rate was also steadily improving to touch nearly 60 per cent.

It is for the fifth consecutive day that coronavirus cases have increased by more than 18,000.

The country has seen a surge of 3,94,958 infections or nearly 68 per cent of the total in June, according to an analysis of the ministry data.

The number of active cases stands at 2,20,114, while 3,47,978 people have recovered, and one patient has migrated, the data showed, indicating that around 59.43 per cent of patients have recovered so far.

India reported its first case of coronavirus on January 30 from Kerala when a student who had returned from Wuhan, China tested positive.

It is now the fourth worst-affected country in terms of cases after the United States, Brazil and Russia. 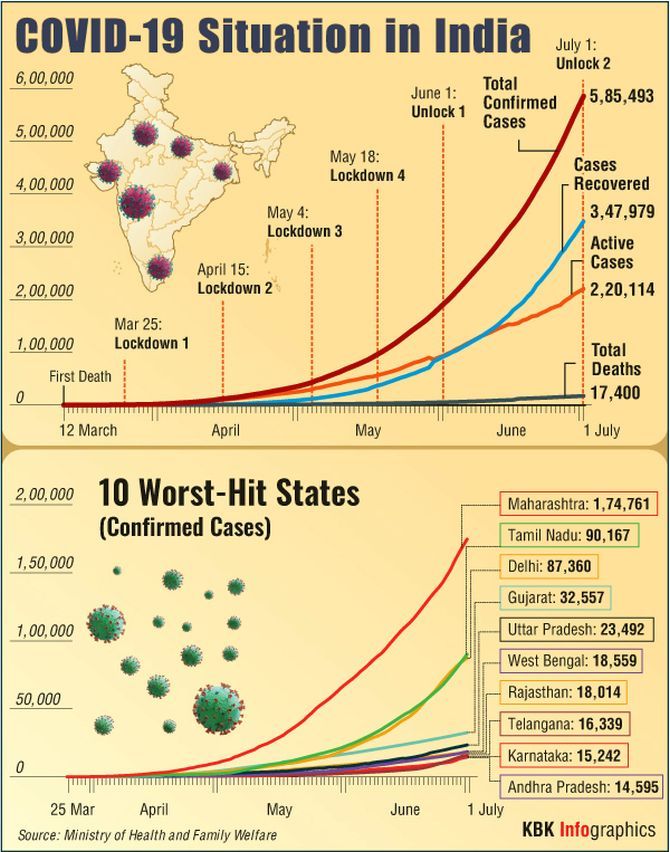 Health officials in Karnataka reported the country's first COVID-19 death on March 12 after samples of a 76-year-old man, who was a suspected coronavirus patient and passed away two days earlier, tested positive for the disease.

In a bid to halt the rapid surge in new infections, Maharashtra, Tamil Nadu, West Bengal, Manipur and Nagaland are among the states which have extended the lockdown beyond June 30 for varying periods up to July 31 without any more relaxations.

With his state accounting for the highest number of COVID-19 cases and fatalities, Maharashtra chief minister Uddhav Thackeray said he prayed for a miracle to overcome the coronavirus crisis.

"I prayed to Mauli. We want to see a miracle. Show us a miracle. Human beings have given up. We don't have medicine. There is nothing. How to go on with life by covering the mouth with a strip," Thackeray tweeted after he performed the 'mahapooja' of Lord Vitthal at Pandharpur in Solapur district on 'Ashadhi Ekadashi' at 2 am along with wife Rashmi.

Ashadhi Ekadashi, an important day in the Hindu calendar, is the 11th lunar day of 'Ashadha' month.

Mumbai police issued prohibitory orders under Section 144 of CrPC in the city, restricting movement of people in public places, and said the measure was taken to check the rising COVID-19 cases.

With 903 new patients reported on Tuesday, the coronavirus case tally in Mumbai increased to 77,197 while the death toll rose to 4,554 with 93 more fatalities. 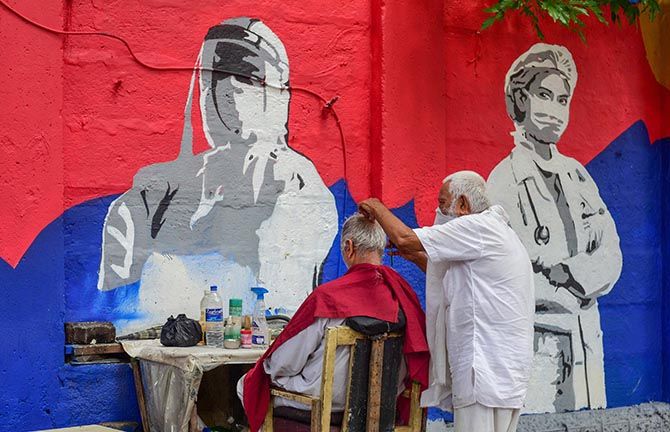 IMAGE: A barber attends to an elderly person at his roadside stall in the backdrop of a graffiti on doctors in Mumbai. Photograph: PTI Photo

The order said curbs on movement for non-essential work came into force from Wednesday and shall remain so till July 15, unless withdrawn earlier.

It prohibited "presence or movement of one or more persons in public places or gathering of any sort", a senior police official said.

The order also said that social distancing norms of maintaining a minimum six feet distance shall be followed at all time.

The second phase of 'Unlock ' also came into force from Wednesday after the month-long 'Unlock 1', a graded exit from the national lockdown imposed on March 25, ended on Tuesday.

Though there will be "phased re-opening" of activities that had been barred to contain the spread of coronavirus, educational institutions, Metro rail services, cinema halls and gyms will continue to remain shut

Political, academic, cultural, religious, sporting events and other large congregations will also continue to be prohibited in 'Unlock 2' phase.

Domestic and international (under the Vande Bharat mission) flights and passenger trains, already operational in a limited manner, will be further expanded in a calibrated manner, according to the ministry of home affairs guidelines. 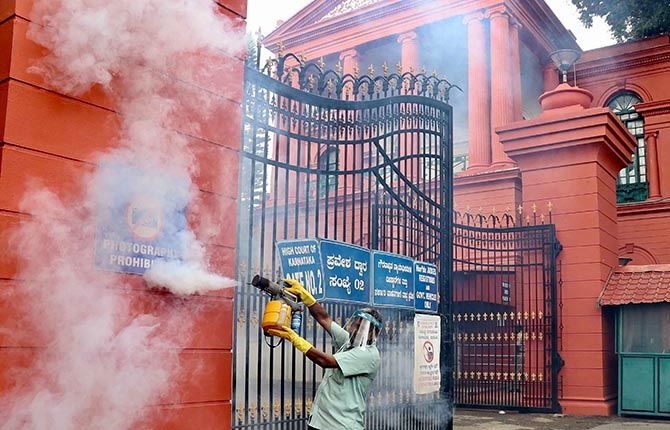 Delhi chief minister Arvind Kejriwal said the COVID-19 situation in the national capital has been brought under control for now with the "combined efforts" of the Aam Aadmi Party government, Centre and other organisations, but cautioned people against any lapse in social and personal behaviour that may again lead to a rise in cases.

Addressing an online media briefing, the chief minister said the situation is not "terrible" as predicted one month ago, asserting that at present, the number of active coronavirus cases has been decreasing instead of increasing.

"There should not be any lapse. After much effort, we have come out of the situation that was a month ago. We will continue our team work. There is proverb - 'Hope for the best, but prepare for the worst'. We will continue our preparations to deal with any situation," he said, and requested people to wear masks, wash hands and maintain social-distancing norms instead.

In Maharashtra, home minister Anil Deshmukh said as many as 4,938 police personnel have tested positive for coronavirus so far and 60 of them have succumbed to the viral infection. 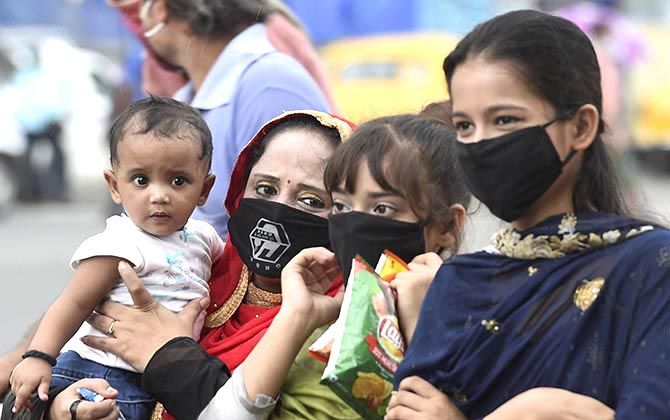 He said 38 of the 60 deceased were from the Mumbai Police force.

As many as 3,813 of the 4,938 infected police personnel have recovered from COVID-19 while over 1,000 others are currently under treatment, the home minister said in a statement. 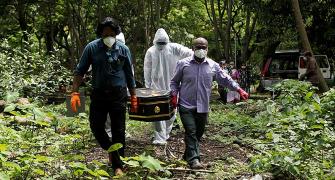 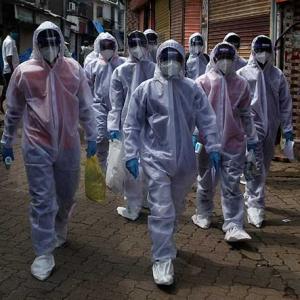 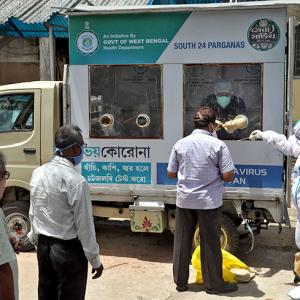