Son leaves job to meet mother, gets news of her death in quarantine

He quit his job in Dubai and returned to India to spend time with his ailing mother but life doesn't always go according to plan -- and news of her death came shortly before his 14-day quarantine in Delhi was ending. 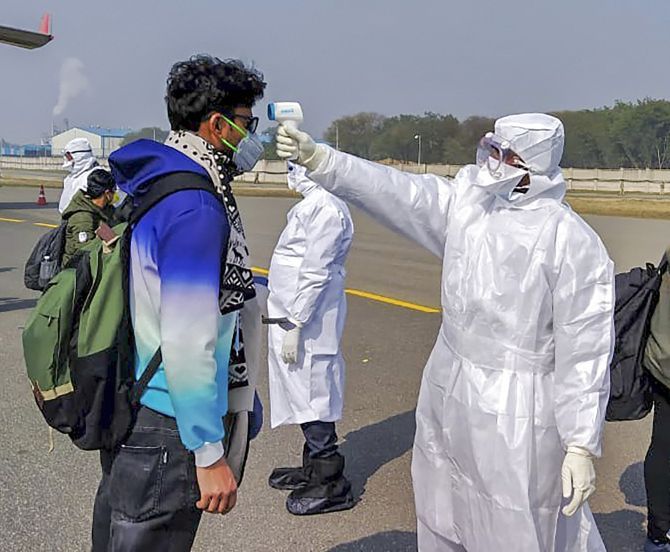 A heartbroken Aamir Khan said his mother died on Saturday and he could not even attend his mother's last rites at their home in Rampur on Sunday. His quarantine would end soon but he wasn't allowed to leave.

It was a series of narrow misses, the 30-year-old, who had moved to Dubai six years ago to work as a product consultant and returned to India on May 13.

On Sunday, the day of his mother's funeral, the government announced revised guidelines for international arrivals. It divided the 14-day quarantine into two -- seven days paid institutional quarantine at the traveller's own cost, followed by seven days' isolation at home with self-monitoring of health.

The government also announced that home quarantine may be permitted for 14 days in exceptional and compelling reasons such as cases of human distress, pregnancy, death in family, serious illness and
parents accompanied by children below 10 years, as assessed by the states.

"I showed the news updates to the authorities... that the guidelines have been revised and I should be allowed to go and will take all precautions. I was ready to take a test too but nothing worked in my favour," Khan said.

Khan had initially planned to come to India in March and spend a month with his mother who had been diagnosed with liver cirrhosis in November last year.

"We will learn to live with the virus but the emotional losses it is causing will remain with us forever. I spent last two months with only one agenda, that I have to meet my mother. I put everything at stake because I was determined to do this," Aamir said in a phone interview from the Delhi hotel where he is quarantined.

But there were hurdles aplenty, including the rapid spread of the novel coronavirus, strict quarantine rules and workplace complications.

"I struggled for two months, making several rounds to the embassy, to come home. Finally I could board a repatriation flight on May 13 from UAE to Delhi," he said,.

In accordance with protocol, he was sent to a quarantine centre, a private hotel he is paying for, for 14 days.

"On the eighth day, I told the representatives from SDM office that I really need to go to meet my mother. They told me they need to take special permission. More days went by and I got a call that my mother passed away. I pleaded the authorities to let me go for the last rites but I wasn't allowed to," he said tearfully.

Recounting his ordeal, Khan said his plans to come in March were put on the backburner after international travel was suspended due to lockdown restrictions to contain spread of COVID-19.

When he finally got a ticket for the repatriation flight after several rounds to the India Embassy, his office in Dubai said they could only give him leave for 20 days.

"I was surprised with their response, I told them there is a compulsory 14-day quarantine period and I won't be left with much time. Bosses were unsure about when will flights resume and when I will be able to get back.

"Not paying heed to what is at stake, I decided to quit and move back in the hope of spending some months with my mother. I had no clue that she did not have any time left," he said.

According to official data, 2.59 lakh people have registered to return from 98 countries under the Vande Bharat Mission, announced to repatriate Indian nationals stranded in different countries due
to travel restrictions imposed in view of the COVID-19 spread.

Gunjan Sharma
© Copyright 2020 PTI. All rights reserved. Republication or redistribution of PTI content, including by framing or similar means, is expressly prohibited without the prior written consent.