Intensifying its fight against COVID-19, the Odisha government announced a 48-hour total shutdown, akin to curfew, in state capital Bhubaneswar, Cuttack and Bhadrak town from 8 pm on Friday, a top official said. 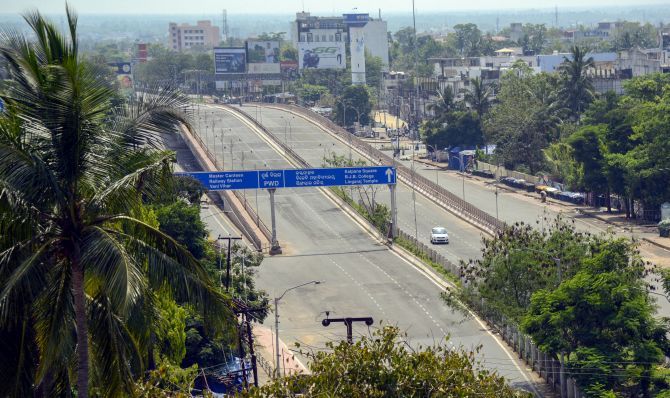 The ongoing lockdown in force in other parts of the state will continue during which essential supplies like groceries, vegetables, fruits and milk will be available to the people.

However, following imposition of complete shutdown in Bhubaneswar, Cuttack and Bhadrak town, essential supplies will be suspended in these place, but select medicine stores will be kept open, Chief Secretary A K Tripathy said.

The local administration will select the medicine shops that will remain open and decide on their time of operation, he said.

Certain essential services have been kept out of the purview of the shutdown, an official said.

Outdoor patient department (OPD) services at hospitals will remain shut and only emergency services will function. Local authorities will give permission to a limited number of pharmacies to operate, the official said.

Tripathy said the 48-hour shutdown order under the Disaster Management Act was issued to prevent community transmission of the highly infectious coronavirus disease.

The decision has been taken to protect people's health, he said.

Of the six coronavirus positive cases in Odisha, four were diagnosed in Bhubaneswar and one each in Bhadrak and Cuttack.

The chief secretary first announced imposition of total shutdown in Bhubaneswar and Bhadrak, and a short while later, the state government announced it for Cuttack following detection of a COVID-19 positive case in the city.

"In view of the fact that one resident of Cuttack has been found positive for COVID-19, the city is being included under the shutdown for 48 hours from 8 pm of today till 8 pm of Sunday," the chief secretary said.

Total closure in these areas is required for aggressive contact tracing, quarantine, testing and isolation as well as containment in the interest of the health of the people, Tripathy said.

The man who tested positive in Cuttack for COVID-19 is the sixth case in Odisha, and he had recently travelled to Delhi, a health and family welfare department official said.

He has been identified as a Tablighi Jamaat returnee, the state government's chief spokesman on COVID-19 Subroto Bagchi said.

Earlier last month a congregation of the Tablighi Jamaat was held in the national capital's West Nizamuddin area, which has turned into a COVID-19 hotspot.

More ambulances will be made available in Bhubaneswar, Cuttack and Bhadrak during the 48-hour shutdown, Bagchi said.

Some petrol pumps will remain open on permission from authorities, he said.

Chief Secretary Tripathy said as per the total shutdown order in Bhubaneswar, Cuttack and Bhadrak, all activities that were permitted during the lockdown will remain suspended for 48 hours.

The central government had announced the 21-day nationwide lockdown from March 25 to prevent the spread of the coronavirus.

Passes issued for the lockdown period will remain suspended during the duration of the total shutdown in the three places, Tripathy said.

Those who violate shutdown orders will be booked and kept in 14-day quarantine by the government, the chief secretary said.

He said that 'any violation of the shutdown order shall entail prosecution under penal provisions of the Disaster Management Act, 2005 and the Indian Penal Code'.

The situation during the shutdown will be like curfew but people need not panic as it is a precautionary measure against COVID-19 spread, Odisha Director General of Police (DGP) P Abhay said.

"In a way, it will be akin to curfew, while during lockdown certain activities were allowed," he said, adding that stringent action will be taken against violators of the shutdown.

During the shutdown, goods transportation through Bhubaneswar and Bhadrak will continue on the National Highway.

The shutdown is being clamped to enable teams undertaking scientific surveillance in these areas, the DGP said. Certain exceptions permitted in case of the lockdown will be suspended by order of the state's disaster management authority, he said.

As soon as the news of the total closure spread in the three places, people were seen hurrying towards grocery and vegetables shops to stock food items in their homes.