Unfazed by the nationwide lockdown, a 22-year-police constable walked for nearly 20 hours during the 450-km journey from his hometown in Uttar Pradesh to Rajgarh in Madhya Pradesh to join duty. 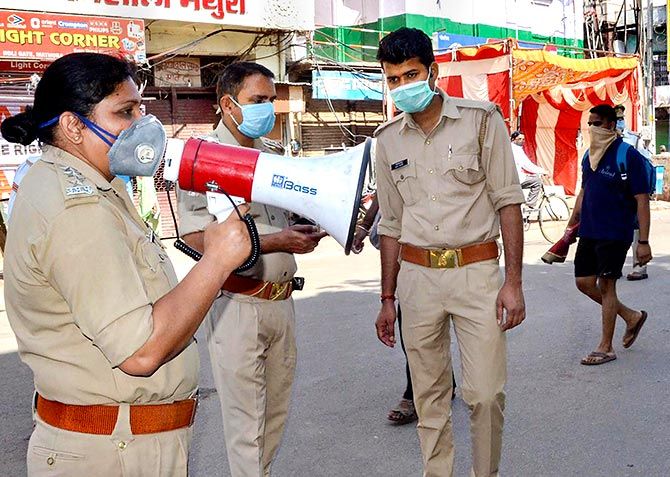 IMAGE: Police officials urge people to stay at their homes during a nationwide lockdown in the wake of coronavirus pandemics, in Mathura, on Monday. Photograph: PTI Photo

The Rajgarh police lauded constable Digvijay Sharma's commitment towards work and advised him rest for a few days as his legs got sore muscles after travelling long hours on foot.

Talking to PTI on Monday, Sharma said he was on leave from March 16 to 23 to appear for his BA (Bachelor of Arts) exams at Etawah in Uttar Pradesh. But, the exams got postponed due to the shut down.

"I contacted my boss -- Pachor police station inspector -- and told him that I want to join duty during these testing times. He advised me against it as there was no transport facility available," he said.

Sharma's family also advised him to stay at home, but he could not hold himself back.

"I started my journey on foot from Etawah on March 25 morning. I walked for nearly 20 hours during my journey in which I took lifts from people on motorbikes and reached Rajgarh on Saturday night. I subsequently informed my boss about my arrival," he said.

Sharma said during the journey he did not get anything to eat for a day, but later some social organisations provided him food.

"My boss asked me to rest as I have sore legs. I will join duty soon," said the constable, who joined the Madhya Pradesh Police force on June 1, 2018.

Rajgarh Superintendent of Police (SP) Pradeep Sharma said he gave the constable a letter lauding his commitment and dedication towards work during such challenging times.

"I am going to write to the state Director General of Police, requesting him to give the constable a letter of appreciation," the SP added.