4 held in Indore under NSA for attacking health workers

Four men were on Friday detained under the National Security Act(NSA) for the alleged attack on health workers in Indore even as Uttar Pradesh Chief Minister Yogi Adityanath said this stringent act will be invoked against quarantined Tablighi Jamaat members accused of misbehaving with the nursing staff at a Ghaziabad hospital. As sporadic attacks on doctors, social workers and police personnel come to light in the country's battle against the coronavirus outbreak, the UP authorities also said the NSA will be slapped on people who assault policemen enforcing the 21-day national lockdown which entered the 10th day on Friday.

Under the NSA, people can be detained without a charge for up to 12 months if the authorities are satisfied that the person is a threat to the national security or law and order.

The president was participating in a video-conference with Governors, Lieutenant Governors and Administrators of states/union territories.

"In the conference there was unanimity that there is no scope for laxity or complacency in fighting the invisible enemy. In this context, the president noted with concern the incidents of attacks on doctors, health workers and police personnel in some parts of the country," according to a statement issued by the Rashtrapati Bhavan.

The Union Home Ministry asked the states and union territories to take strict action against those involved in the attacks.

The Bollywood fraternity also expressed its solidarity with the healthcare workers who were risking their lives on the front lines of the pandemic, and said the attacks on them were 'shameful and condemnable'.

The Indore district Administration invoked the NSA against four men involved in the alleged attack on health workers in the city.

A five-member team from the state health department had gone to Taatpatti Bakhal area on Wednesday to quarantine relatives and acquaintances of a COVID-19 patient, when an unruly mob attacked them with stones, injuring two women doctors.

The police arrested seven persons for the alleged attack on Thursday and the district administration has slapped the NSA on four of them, the official said.

The police on Friday detained six more men in connection with the incident.

Chief Minister Adityanath took a serious note of the incident, calling those involved 'enemies of humanity'.

'They will neither accept the law nor follow arrangements. Whatever they did with women health workers is a heinous crime. The NSA is being invoked against them. We will not let them go scot-free,' he said in a statement in Lucknow.

The six Jamaat members were later shifted to a temporary isolation ward set up at a private educational institute following complaints against them.

The Jamaat members were among the thousands who attended a religious congregation at the organisation's New Delhi headquarter, now emerging as a coronavirus hotspot.

Police said the Jamaat members were booked for allegedly indulging in ugly acts and passing lewd remarks against the women staff members at the hospital.

A case was registered against them at the GT Road Kotwali on receiving a complaint from the chief medical officer.

SSP Kalanidhi Naithani said stringent action will be initiated. In the complaint, a nurse alleged that the coronavirus suspects were roaming in the hospital without trousers.

The Jamaat members sang vulgar songs and made ugly gestures, the nurse alleged, adding that they were not taking their medicines.

They were also not following social distancing norms, she said in the complaint.

Police have registered the case under Sections 269, 270, 271, 294 and 354 of the Indian Penal Code, the SSP said. The sections relate to sexual harassment and acts relating to the spread of disease.

A senior UP Home Department official said NSA will be slapped on people who attack policeman enforcing the lockdown to prevent the spread of coronavirus.

"The police is doing its duty by preventing people to come out during lockdown. There have been incidents in the state in which policemen were attacked by people. To deter such persons, it has been decided to invoke NSA against such persons," the official told PTI in Lucknow.

Five persons were arrested and a case registered against them and 10 others for allegedly attacking a police team that was trying to enforce lockdown restrictions at Morna village in Bhopa police station area in Muzaffarnagar, police said.

Two policemen, including the in-charge of the police outpost sub-inspector Lekhraj Singh were seriously injured in the attack that took place on Wednesday, it added.

In another incident in UP, two policemen were injured on Friday when they came under attack by some people, who were stopped from gathering for Namaz in a mosque in Kannauj district, an official said.

In Chattisgarh, a policeman was attacked by a group of villagers after he intercepted a man for violating the COVID-19 lockdown in Raigarh district, an official said.

'Respect. Dr Trupti and Dr Raziya are true role models. And the behaviour of those who pelted them with stones is shameful and condemnable,' Azmi said on Twitter, referring to the two women doctors who were injured.

Actor-turned-politician Hema Malini said, 'In the midst of the entire country's appreciation of the sacrifices of doctors, health workers and paramedics comes the news of unwarranted attacks on them in Indore by ungrateful miscreants. How could a mob attack people who are risking their own lives to save ours? Sad! Shameful.'

Kapoor appealed to everyone to not resort to any kind of violence on the medical staff and police.

'An appeal to all brothers and sisters from all social status and faiths. Please don't resort to violence,stone throwing or lynching. Doctors,Nurses,Medics, Policemen etc..are endangering their lives to save you. We have to win this Coronavirus war together. Please,' Kapoor said.

Actor Shilpa Shetty said instead of attacking the medical professionals one must come together to help them in the fight against the pandemic.

Maharashtra Home Minister Anil Deshmukh warned of 'very strict' action if police and health personnel are attacked during the lockdown.

Deshmukh said it is in the interest of the people to co-operate with the police and those from the healthcare system in tackling the COVID-19 crisis.

Seven people have been arrested in two different incidents for allegedly manhandling health workers conducting a coronavirus survey at a layout near Bangaluru and threatening one of them over phone at Mangaluru, police said.

While five people were arrested for allegedly manhandling health workers conducting the COVID-19 survey at a layout near Hegde Nagar here, two were arrested in Mangaluru for threatening a health worker over phone after she called up to enquire about the health of people from the Gulf who came here on vacation, police said.

Referring to the incident in Bengaluru, police said an FIR was registered against the attackers on a complaint by health inspector Muniraju and they were arrested late on Thursday night.

The Accredited Social Health Activist (ASHA) workers along with health officials, were conducting a door-to-door survey in Sadiq Layout as part of an exercise to identify if any of those who returned to the state after attending the Tabligh-e-Jamaat congregation in Delhi had COVID-19 symptoms.

'Instances of health workers being assaulted and also creating obstruction have been noted. A very stringent warning is issued that anyone who does or supports such acts, non bailable criminal cases will be registered against them and they will be sent to Jail.

A woman ASHA worker had alleged that announcement was made from the mosque after which people came out of their homes, abused and attacked them and snatched their bags, kits and mobile phones.

In Mangaluru, the woman health worker rang up a man on his mobile phone on Wednesday to enquire about the health of people from the Gulf who came there on vacation as part of a routine COVID-19 enquiry, police said.

The same evening, she got a call from two relatives of the man who hurled abuses at her and also reportedly issued death threat to her.

Based on the complaint from the ASHA worker, the two were arrested on Thursday night, police said.

The incidents prompted the Karnataka government to issue a stern warning on Thursday to the offenders, saying strong action would be taken against them. 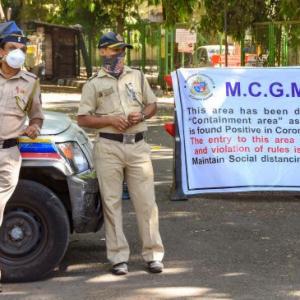