Amid high drama, a minister in the crisis-stricken Kamal Nath government was on Thursday allegedly stopped by police from entering a resort near Bengaluru where 19 of the 22 rebel Congress MLAs from Madhya Pradesh were believed to be holed up. The minister, identified as Jitu Patwari, was briefly detained along with a few Congress supporters as he sought to enter the resort in the Bharatiya Janata Party-ruled Karnataka, police sources said.

A video purportedly showing the minister engaged in a heated argument with the police has surfaced.

Patwari later called on newly appointed Karnataka Congress chief D K Shivakumar, considered a troubleshooter of the party, and alleged the MLAs at the resort were made to release videos stating that they had voluntarily decided to resign.

Talking to reporters, both Patwari and Shivakumar claimed one of the MLAs had telephoned his father and asked him to take him back to Bhopal.

Another MP minister Lakhan Singh, the father of the MLA and his brother went to the resort along with Patwari to meet him (the MLA) when they were "manhandled", Shivakumar said.

Patwari alleged police forcefully took them to a police station and was starting the process of arrest when Shivakumar
intervened and "saved us".

The police action was condemned by the Karnataka Congress which demanded an apology from Chief Minister B S Yediyurappa.

Nineteen Madhya Pradesh MLAs, including six ministers, who are staying put in the city, had earlier this week written to Karnataka Director General and Inspector General of Police seeking protection and police escort.

According to sources, the Minister had come with an intention to convince the MLAs, who have sent in their resignations, to return to the party fold.

Karnataka Congress alleged the minister was arrested and condemned the police action.

"Goonda behaviour of Karnataka BJP government is not right, they should be released immediately, and Chief Minister B S Yediyurappa has to apologise for the mistake," the state Congress tweeted.

The 19 legislators, said to be loyalists of Jyotiraditya Scindia who has joined the BJP, in their letter to the DGP had said they have come to Karnataka "voluntarily" on some "important work".

All 19 had announced their resignation on Tuesday, pushing the Kamal Nath government into a crisis.

It is not clear whether all the 19 are staying at the resort where Patwari had gone.

Shivakumar said MLA Manoj Choudhary had telephoned his father to take him back to Bhopal.

"They had gone there (to resort) to meet the son who wanted to go along with them.in some time I was informed that some problem had arisen, police had harassed and manhandled them, and I had to intervene," he added.

Asked will he take any lead on the rebels issue, now being the KPCC President, Shivakumar merely said, "I don't want to comment right now on the issue. They are my guests, my friends....

"When they have come here it is my bound duty to help them -- whatever help they ask. I don't want to disclose the next action. Time will reply to everything," he said.

Patwari claimed that a few among the MLAs here had called him to inform about the real situation.

He said Choudhary was his cousin and as soon as his father who came with him tried to approach his son at the resort, some "anti social elements" there stopped and took him away. "Police also tried to harass us.

"This is nothing but BJP's conspiracy for their undemocratic activities," he alleged.

"We just want to meet them (MLAs) and go, why are we being stopped? Why a father is not being allowed to meet his son?" Patwari asked. MP speaker asks 22 rebel MLAs to appear before him 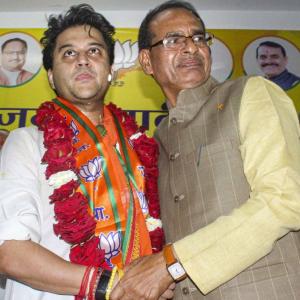