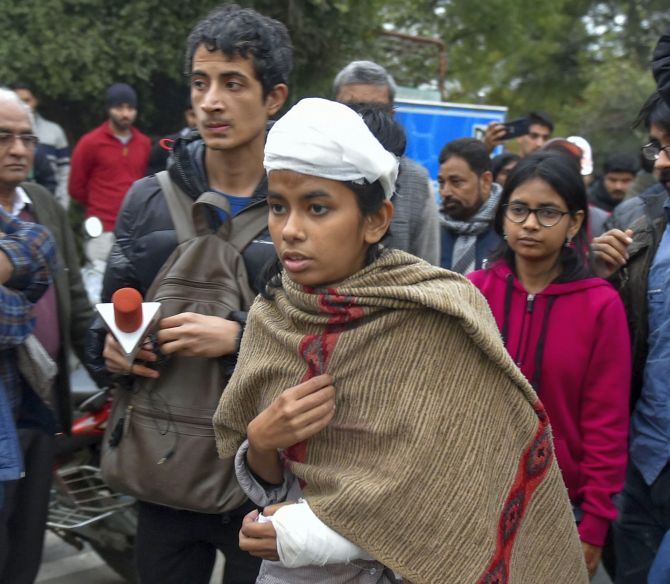 IMAGE: JNU student union president Aishe Ghosh leaves JNU campus after addressing the media. Ghosh was on Sunday allegedly beaten by a group of masked men and women armed with sticks, rods who unleashed violence on the campus of the University. Photograph: Kamal Kishore/PTI Photo

Both the FIRs were filed against Ghosh on January 5.

According to the JNU security department, a group of students wearing masks on their faces forcibly entered the office of the centre for information system located in a building near the Administration Building on January 1.

"They switched off the power supply and evicted all the technical staff working there and made servers dysfunctional. They obstructed and stopped the public servants from doing the duties they pushed, threatened, abused, and chased the staff out of the office ad server room. Subsequently, they locked the room and squatted at the door and did not let the staff enter the server room," the university officials alleged in the complaint.

The second FIR was filed against Ghosh and 19 others for allegedly attacking security guards and vandalising the server room of the Jawaharlal Nehru University on January 4.

SEE: Every iron rod used against students will be given back by debate, discussion, says JNUSU president

In the complaint filed by the JNU administration, the University alleged that the accused were involved in physical violence and pushed the women guards, verbally abused them and threatened them of dire consequences if they opened the lock of university's communication and information office.

"They illegally trespassed on university property with the criminal intention to damage public property. They damaged servers and made it dysfunctional. They also damaged fibre optic power supplies and broke the biometric systems inside the room," the university officials alleged.

This incident allegedly occurred a day before Aishe Ghosh, other JNU students and teachers were attacked by a masked mob inside the campus.