The government on Monday said that its Census enumerators were facing problems in carrying out the exercise due to "misconceived apprehensions" of certain citizens and stressed that it was mandatory for each household to share information with them.

It has been observed from the feedback received from enumerators and supervisors pressed into service for undertaking the gigantic task that there have been misconceived apprehensions in the minds of some habitants which prevent them to actively take part in this huge exercise, an official release said.

In some of the cases, the enumerators are even not permitted to enter the households on some pretext or the other, it said

This not only hinders the functioning of government servants in performing duties but also will seriously hamper the progress of the unique exercise undertaken by the government for the first time in the history of the nation by directly involving 25 lakh enumerators and supervisors.

Under Census 2011, the First Phase of House listing and Housing Census along with collection of Data on National Population Register has commenced with effect from April 1, 2010 in a phased manner covering 29 states and Union Territories till May, 2010.

The remaining states are to be covered during June, 2010. For each state the exercise is targeted to be completed within 45 days, to be followed by Biometric and Photography visits required for Publication of the National Population Register.

"This is reiterated that it is mandatory on the part of each household to share information with the enumerator. This information, to be collected for the National Population Register only, will be highly confidential and will provide the spade work for formulating the policies and programmes by the Governments, both Central and State, for the betterment of the people of our huge nation," the release said,

Moreover, each usual resident will get a unique ID card for the first time once the whole exercise in completed. The valuable cooperation of each household is highly solicited for making the exercise totally successful, it added. 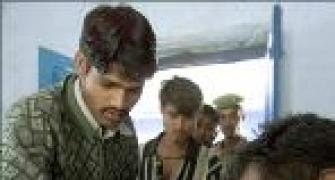 Census to be launched on April 1