Conspiracies hatched across the border being foiled daily: J-K DGP

Conspiracies hatched from across the border to disturb peace are being foiled by security forces on a daily basis in Jammu and Kashmir, Director General of Police (DGP) Dilbag Singh said on Tuesday. 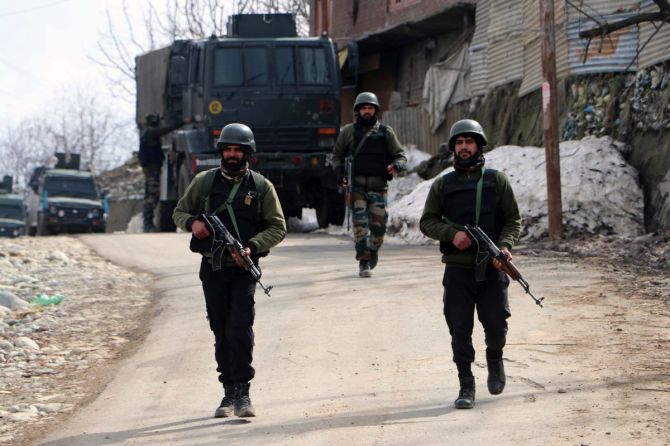 Singh asserted that the security forces were fully alert to scuttle infiltration attempts by terrorists before the onset of winter.

"We are fully alert to the threats as conspiracies being hatched from across the border are being foiled on a daily basis by police and other security agencies," Singh told reporters after unveiling a wall dedicated to police personnel who died fighting terrorism in Reasi district.

He said attempts to push terrorists and smuggle weapons from across the border were going on but the alertness of the police and security agencies had thwarted most of these bids.

"Terrorists are infiltrated to sustain militancy. Most of the time, these attempts are foiled but sometimes they succeed. Those who are successful are neutralised by police and security forces (in the hinterland)," the DGP said.

He said many such terrorists were neutralised in successful anti-terrorism operations in Jammu, Poonch-Rajouri and different parts of Kashmir valley.

"Two 'fidayeen' (suicide squad) were eliminated in Jammu ahead of Prime Minister Narendra Modi's visit to Jammu and Kashmir (in April). The conspiracy was hatched across the border but they were neutralised on time," Singh said.

"Some of them crossed into Kashmir and were neutralised," he added.

The DGP said launching pads and training centres for terrorists are active across the border and attempts would continue to push terrorists and weapons into this side.

"Our effort is to frustrate their designs and as a result, we are having successful operations against terrorists in every district," he said.

He also defended the arrest of some prominent Muslim preachers in the Valley under the Public Safety Act (PSA) and said strict action would be taken against anyone who violated the law.

"Law does not believe in religion or sect and is equal for everyone. Anyone who violates law will be dealt with accordingly," he said.

Lauding his men for working tirelessly to scuttle attempts from across the border to revive militancy in Reasi, he said the district was once a hotbed of terrorism.

"Today is a moment of happiness that Reasi is militancy free for a long time now," he added.

He admitted that there have been attempts to revive militancy in the district but police and security agencies foiled these conspiracies being hatched directly by Pakistani agencies.

"Some attempts were made to revive militancy in the district but police and other security agencies, who are alert to the threat, frustrated these conspiracies being directly handled by Pakistani agencies.

"Several persons involved in terror activities were arrested and the whole network was unearthed. Strict legal action was also taken against them and they are behind bars at present," he said.

Asked about the probe into the May 13 fire in a bus carrying Vaishno Devi pilgrims in Katra town of Reasi that left four persons dead and several others injured, the police chief said investigation was on and the findings would be put before the court.

Singh also expressed hope that the peaceful atmosphere in Jammu and Kashmir would be strengthened and safeguarded further.