The Supreme Court on Friday asked the Jammu and Kashmir administration to explore the possibility of restoring 4G services in certain areas of the Union Territory, which sought time for instructions on the issue saying a new Lieutenant Governor of the UT has just been appointed. 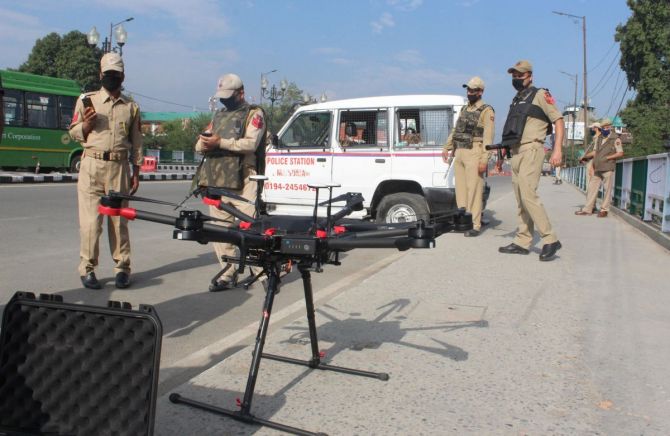 IMAGE: Restrictions imposed in Kashmir in view of first anniversary of abrogation of Article 370. Photograph: Umar Ganie for Rediff.com

Manoj Sinha has been appointed the new L-G of Jammu and Kashmir, after G C Murmu resigned from the post on Wednesday night and was appointed Comptroller and Auditor General (CAG) on Thursday.

High speed Internet service in J-K has been suspended since August last year when the Centre announced revocation of its special status and bifurcation of the state into two UTs -- Ladakh and Jammu and Kashmir.

The top court told the administration that with the change of L-G, nothing changes as the special committee is there to look into the issue.

A bench of Justices N V Ramana, R Subhash Reddy and B R Gavai adjourned the hearing for August 11, on the contempt plea filed by an NGO seeking restoration of 4G internet service in the UT.

The apex court was hearing a plea of the NGO seeking initiation of contempt proceedings against the Union home secretary and chief secretary of J-K for their alleged 'wilful disobedience' in complying with the court's May 11 order.

At the outset, Solicitor General Tushar Mehta, appearing for the J-K administration, told the bench that he needs to take instructions as the L-G has changed there and new L-G has taken over.

The bench said that with the change of L-G, nothing changes as the high powered committee is there to look into the issue.

It said the court cannot say what the situation is on the ground level but the issue is that the matter should not be delayed.

The bench asked Mehta to take instructions on whether 4G services can be restored in certain areas.

Mehta said there is no intention to delay the issue as the top court's order has been complied with in letter and spirit and he would take instructions.

The bench told Mehta that he has to explain as to under what circumstances the former LG had reportedly said that the 4G internet service can be restored and what was the basis of that statement.

Senior advocate Huzefa Ahmadi, appearing for the petitioner NGO raised the issue of time sought by the respondents repeatedly in the matter.

The bench told Ahmadi that he must also be aware of the changes and asked him to wait for two more days.

It said that strictly speaking, the matter can be disposed of but the court needs to see under what circumstances that statement was reportedly made by Murmu.

The bench told Mehta that there is no question of further adjournment and he should take instructions on the issue.

Mehta said earlier they had filed response to the petition and then there was some subsequent interview given by the LG.

On July 28, the Centre and the J-K administration had told the top court that it will verify reported statements made by Murmu and BJP leader Ram Madhav that 4G Internet service can be restored in the Union Territory, and sought time to file a reply to the rejoinder affidavit filed by an NGO.

A contempt plea has been filed by an NGO Foundation for Media Professionals seeking action against authorities for not complying with the apex court's direction on restoration of 4G internet services.

On July 16, the Centre and J-K administration had told the top court that a special committee has been set up as per the court's directive to consider the issue of restoration of 4G Internet services in the Union Territory.

Venugopal, while claiming that incidents of terrorism are on the rise there, had told the court that no contempt was made out against the authorities as they have complied with the directives of the apex court.

On May 11, the top court had ordered setting up of a 'special committee' headed by the Union home secretary to consider pleas for restoration of 4G internet services in J-K, saying national security and human rights need to be balanced in view of the fact that the UT has been 'plagued with militancy'.

The contempt plea filed by the NGO has alleged that authorities concerned have not yet constituted the special committee in line with the top court's order.

It has also urged the apex court to summon the Union Home Secretary and Chief Secretary of UT of Jammu and Kashmir to explain their position with respect to the alleged non-compliance of the court's directions.

The plea said that the Jammu and Kashmir administration had on May 27 passed an order continuing the restriction on mobile Internet speeds to 2G in all districts throughout the UT without any restriction by time or region.

Besides the contempt plea, the petitioner has also filed an application seeking directions to the authorities to notify the constitution of the special committee within three working days.

The application has sought an interim direction to the authority to restore 4G mobile internet services in Jammu and Kashmir, pending disposal of the plea and also the decision by the special committee.

The court had earlier taken note of the submissions of the Centre that continuous infiltration, foreign influence, violent extremism and issues of national integrity are prevalent in J-K.

The apex court's May 11 order had come on the pleas filed by the Foundation for Media Professionals and others seeking restoration of 4G services in the UT.