Congress leader Adhir Ranjan Chowdhury stoked a controversy on Monday with his naali (drain) remark against Prime Minister Narendra Modi in the Lok Sabha, with the Bharatiya Janata Party launching a scathing attack on him and his party, saying this "arrogance" will finish them. 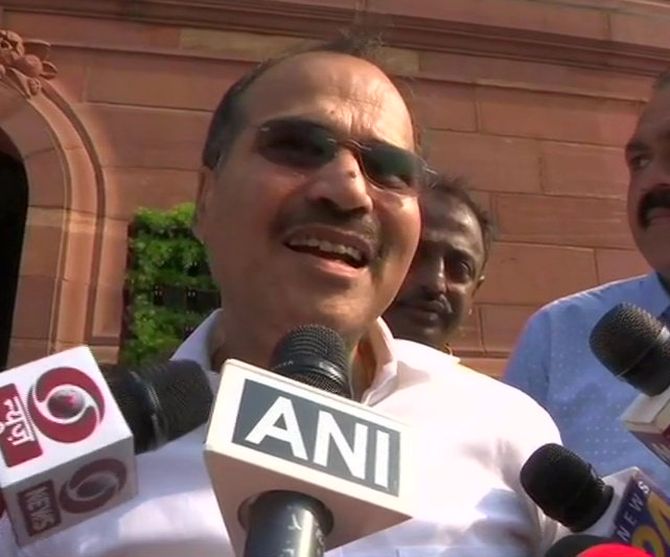 Later, Chowdhury, the Congress leader in the LS, clarified that his intention was not to insult the Prime Minister and he regrets if Modi was hurt by his comment.

Speaking during the debate in the Lok Sabha on the 'Motion of Thanks' to the President's address, Chowdhury said he made the naali comment in response to some BJP leader's comparison of Modi with Swami Vivekananda which provoked and angered him.

However, Chowdhury had made the remark soon after BJP minister Prahlad Joshi had said that at least BJP members don't say "India is Indira and Indira is India".

Taking to the Twitter to condemn the Congress leader's remarks, Nadda said,"the Congress is consistently insulting the Prime Minister who has been elected by 125 crore people. The people of the country are giving their reply to Congress in every election. Their arrogance will finish them."

The Congress leader from West Bengal later told reporters that his Hindi was not good and he was misunderstood as he made the analogy after he got provoked and enraged by the BJP for comparing Modi with Swami Vivekananda.

"I think you are certainly misunderstanding me. I did not say gandi naali (dirty drain), I said naali. If the PM felt bad or hurt, I will be pained. I did not say this to cause him hurt. I was provoked to say this when BJP MP compared him with Swami Vivekananda, who is revered in Bengal. If PM is hurt, I will personally apologise to him.

"My Hindi is not good as I am not a Hindi-speaking (person). By naali, I meant a channel. I am ready to apologise to the Prime Minister...I got enraged when BJP member tried to humiliate Swami Vivekananda by comparing him with Narendra Modi. That was vehemently opposed by me. That's why I used that analogy," he told reporters outside Parliament.

He said he was trying to say that there was no comparison between "Ma Ganga" with a naali (channel)."

"I never wanted to say gandi naali. I never intended to say so," he said.

Chowdhury was also trolled on the Twitter for his remarks.