By Mohammed Siddique
Last updated on: November 24, 2010 20:43 IST
Amid indications of a tussle between different factions in Andhra Pradesh Congress over the selection of a successor to K Rosaiah as the chief minister, the party high command has decided to send four senior leaders as observers to attend the Congress legislature party meeting, which will be held in Hyderabad on Wednesday evening.

The emergency meeting will be attended by Congress top brass -- Finance Minister Pranab Mukherjee, Defence Minister A K Antony, Health Minister Ghulam Nabi Azad and Law Minister Veerappa Moily, who will oversee the smooth transition of power in the state.

Their presence assumes significance as the group led by defiant Member of Parliament Y S Jaganmohan Reddy, the son of late Andhra CM Y S Rajasekhara Reddy, had all plans in place to stake claim to the CM's chair. But even as Jaganmohan Reddy had his hopes pinned on the post after Rosaiah's sudden resignation, the first salvo was fired by Congress MLA and Jagan loyalist Konda Surekha. She demanded that YSR's widow Vijaya Lakshmi take over from Rosaiah.

Meanwhile, the Jagan camp held a separate meeting in Hyderabad on Wednesday afternoon to assess their options. Earlier, the defiant minister had decided to stay away from the CLP meet, but his group later changed its mind after Rosaiah's visit to Delhi and decided to rush to Hyderabad.

The possibility of Kiran Kumar Reddy, assembly speaker becoming the next chief minister has created ripples among Congress legislators from Telangana. The speaker, who hails from the Rayalaseema region, is seen as an opponent of the separate Telangana state.

Senior Telangana legislator R Damodar Reddy has warned the party high command against making any anti-Telangana leader the Andhra CM. "Let the new leader be anybody, but he should not be against Telangana state," he said.

No clarity on Rosaiah's successor

Suspense still lingers over who will replace Rosaiah as CM. While some Congress insiders suggested that Kiran Kumar Reddy is the frontrunner for the post, there were indications that Union Urban Development Minister Jaipal Reddy, who is from the politically-sensitive Telangana region, is a popular choice among the Congress top brass since he has kept himself away from any controversy. 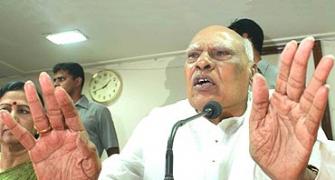 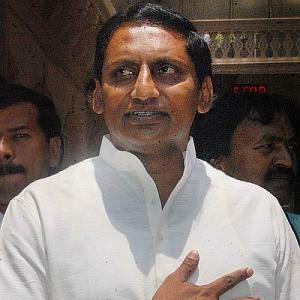