The defeat of their leaders has stunned party workers of the Asom Gana Parishad and the Bharatiya Janata Party into silence.

AGP president Chandra Mohan Patowary lost in Dharmapur, his home ground, to his Congress rival Nilamoni Sen Deka by over 5,000 votes. Patowary was the chief ministerial candidate for the AGP with plans of forging an alliance with the BJP. Unfortunately for him, the voters did a complete turnabout.

With the Congress clearly headed for victory, Assam Chief Minister Tarun Gogoi on Thursday expressed gratitude to the people of the state for reposing their confidence in the Congress. "We were sure of forming the government again as very few states in the country had introduced so many schemes for the welfare of common people," Gogoi told mediapersons.

"The people were by and large satisfied with our work and mostly women, youths and the educated people were enthusiastic and supported us to win," he said.

Asked about the mantra for his party's victory for the third consecutive term under him, the chief minister replied, "There is no mantra. People understood our commitment and sincerity to work for them."

"In spite of propaganda by the opposition parties and some organisations such as the Krishak Mukti Sangram Samiti, the people were not swayed but remained faithful to our commitment to them," Gogoi said. "We are very grateful to the people for believing in us and not the opposition propaganda", he added.

The chief minister expressed the hope that the peace talks with the United Liberation Front of Asom and other militant outfits National Democratic Front of Bodoland, Karbi Longri National Liberation Front, Dima Halim Daogah-Jewel, etc, would be resolved through negotiations during the next five years.

On the issue of corruption, Gogoi said, "I am not denying that there is corruption but we need to tackle the situation."

Party workers were seen celebrating by serving puri-sabzi to visitors and well-wishers at the Assam Pradesh Congress Committee headquarters. 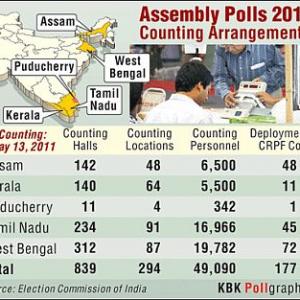