News
Business
Movies
Sports
Cricket
Get Ahead
Money Tips
Shopping
Sign in  |  Create a Rediffmail account
Rediff.com  » News » Congress is not worthy of an alliance: Kumaraswamy

Janata Dal-Secular leader H D Kumaraswamy on Thursday made a sharp attack on erstwhile ally Congress, saying it was not a party worthy of an alliance and it does not honour coalition dharma. 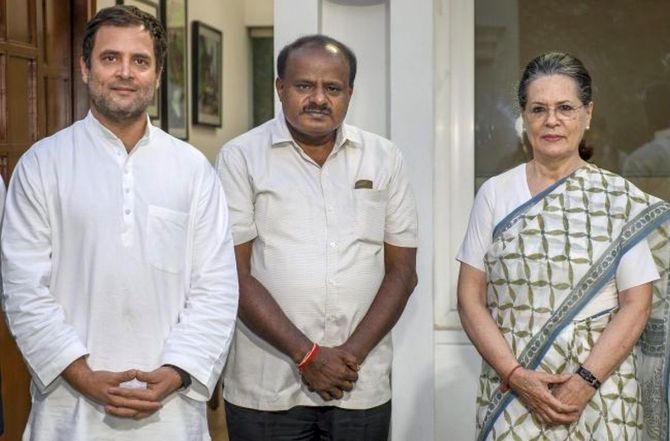 A day after the Karnataka Congress ruled out any understanding with the regional party for the November 3 by-elections to two assembly constituencies in the state, the former chief minister hit back, declaring there was no such proposal from JD-S.

"....who had placed the proposal from the JD-S to have an alliance with the Congress? None of us have gone to Congress' doors like they had come to H D Deve Gowda's (JDS supremo) doors after the 2018 assembly polls," Kumaraswamy tweeted.

He was referring to the Congress forging the post-poll tie-up with JD-S under which he became the chief minister heading the coalition government, that had collapsed last year following rebellion by a section of MLAs from both parties.

The Congress was not a party worthy of an alliance, he said adding this was 'proved' by its conduct such as "bringing down" the coalition government led by him, luring of BSP MLAs supporting its government in Rajasthan to defect and its attempts to 'destabilise' the government in Maharashtra.

"There cannot be an alliance with Congress that does not honour the coalition dharma," Kumaraswamy said.

Whenever there was a reference to alliance in the state, let there be no feeling that it involved the Congress and the JD-S. Let Congress leaders don't try to take political mileage by using the names of JD-S and his father Deve Gowda, he said.

Congress Legislature Party leader Siddaramaiah and KPCC President D K Shivakumar on Wednesday had ruled out any possibility of an understanding with the JDS for the November 3 bypolls in the state.

The Election Commission on Tuesday had announced the schedule for by-election to Sira in Tumakuru district and Rajarajeshwari Nagar (R R Nagar) in Bengaluru.

The bypolls had been necessitated in Sira following the death of sitting MLA B Sathyanarayana of JD-S last month, while the R R Nagar seat fell vacant following the disqualification of Congress MLA N Munirathna under the anti-defection law last year.

The Congress has finalised former minister T B Jayachandra as its nominee from Sira, but is yet to find a candidate for R R Nagar.

The Bharatiya Janata Party and the Janata Dal-Secular are yet to name the candidates for both the seats.

Both the Congress and the JD-S that had formed a coalition government led by Kumaraswamy after 2018 assembly polls, parted ways following the collapse of government due to internal differences and defection from several legislators.