Trinamool Congress (TMC) supremo Mamata Banerjee on Saturday trained her guns on the Congress, saying that Prime Minister Narendra Modi will become more powerful as the grand old party is not serious about politics, and alleged that the country is suffering because that party does not take decisions. 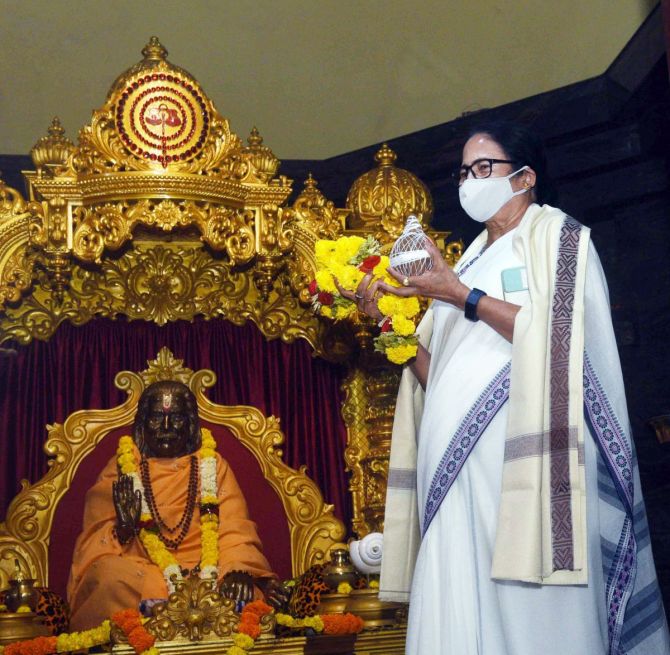 Apparently targeting the BJP-led central government, she said she will not tolerate Delhi's 'dadagiri' (bullying) any more.

Addressing a group of media persons here on the last day of her three-day visit to the coastal state, where Assembly polls are due early next year, Banerjee, when asked about whether she is in the race for the prime minister's post in the next general elections, said she prefers to be an "LIP- less important person" and a street fighter.

The 66-year-old TMC chief arrived in Goa on Thursday evening and held several meetings with local leaders of her party and other politicians. Her party has announced that it will contest all 40 seats in the state, which is currently ruled by the BJP.

Speaking about the Congress, she said, "I cannot say everything right now because they didn't take politics seriously. Modiji is going to be more powerful because of the Congress...If one cannot take decision, why the country should suffer for that?"

Incidentally, her criticism of the Congress came on the day its leader Rahul Gandhi is also in Goa to kickstart the party's campaign in the state.

Recently, poll strategist Prashant Kishor, who is currently lobbying for the TMC for the upcoming Goa polls, had said that the BJP will remain at the centre of Indian politics for the next many years irrespective of whether it wins or loses elections. He had also taken a swipe at Congress leader Rahul Gandhi for "thinking" that it is just of matter of time before people throw the BJP away.

When asked about Kishor's statement about the BJP, Banerjee said, "I feel that he has said that if we want to defeat BJP, we cannot do it the way Congress is heading. We have to give a strong fight to BJP."

Banerjee said the TMC believes in distributing seats for the regional parties in elections.

When asked about what decisions she thinks the Congress should be taking, she said, "I am not going to discuss about the Congress because this is not my party. I have set up my regional party and without any support of anybody, we formed three times government."

"Let them decide. That is my system also, I don't interfere into any other political party's business, I can say about my political party and our fight will continue. We are not going to bow down our head to BJP," she added.

On being asked whether she will be in the race for the prime minister's post in the 2024 elections, she said, "There are some politicians who want to become VIPs, but I prefer to be an LIP - Less Important Person. Let us be street fighters."

Banerjee asked the Modi government why it was not carrying out an audit of the PM Cares Fund, wherein various organisations, government employees and others donated money in the fight against the coronavirus pandemic.

"Nobody can question. If anybody questions, they will send ED to the house or CBI. Even the press people are not spared," she said.

Banerjee alleged that if media writes anything against them, they feel threatened and then they send Income Tax Department for raids or send CBI.

Responding to a question on Arvind Kejriwal-led Aam Aadmi Party (AAP) announcing its decision to contest the Goa polls, the West Bengal chief minister said, "In Delhi, they won because of (social activist) Anna Hazare. You have to appreciate that, everybody supported them. Even civic society supported. It is not that everywhere one political party will go and other cannot go."

"I can say about my party and local regional parties who are really facing trouble and who want to fight against BJP because Goa is facing problems - unemployment problem, fishing sector's problem, taxi drivers' problem, farmers' problem, the mining problem...every problem they are facing."

The TMC chief said that Goans have everything, but the state lacks leadership as well as mechanism and system.

"So, I think, let us build up Goa so that Goa can stand up on its own legs and Goa may be the beginning of the end to defeat the BJP rule," she said.

When asked whether her government will abolish VAT on petrol and diesel in West Bengal to slash the fuel prices, she said each state has its own set of issues.

"We are also giving concession. How is it possible that first you increase the prices and later pressure the regional parties to reduce them," she said.

Hitting out at the BJP for "increasing the fuel prices", she said no other party had taken up the prices to such a level. "Why do they do it?" she asked.

Banerjee said that since the last one year, the farmers have been on the streets, but BJP is ignoring them.

"BJP is claiming about 100 crore vaccination mark, but 30 crore people are yet to get vaccine doses. Only 29 per cent have been given both the vaccine doses. We have population of 130 crore and if you count minors, the figure will touch 150 crore," she said.

Had BJP been really worried about the country, then the country would not have suffered unemployment of this magnitude, she alleged.

When asked about her meeting with the Goa Forward Party (GFP) chief Vijai Sardesai earlier in the day, she said she feels that whoever is committed to fight against the BJP, should "walk together".

"It is their (GFP's) decision, their choice what they decide, we want to avoid the division of votes. The regional and local parties can work together and give a good fight against BJP," she said.