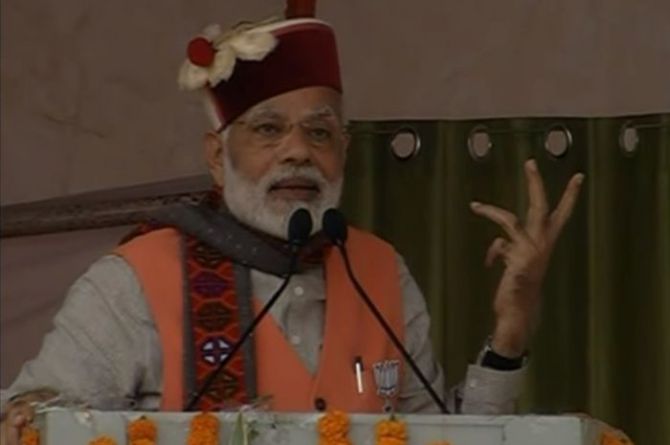 Prime Minister Narendra Modi on Thursday attacked the Congress for promising 'zero tolerance' on corruption when its own chief minister was facing allegations of graft and said the state's ruling party had become a 'laughing club'.

Addressing a rally ahead of the November 9 assembly elections, Modi said it was time to rid 'Devbhoomi', or the land of the gods as Himachal Pradesh is known, of monsters.

Chief Minister Virbhadra Singh, Modi said, was 'out on bail' on graft charges.

"I feel the Congress has become a laughing club. The chief minister is himself out on bail... And he is out on bail on what charges? That of corruption. He is facing serious allegations," Modi said.

He asked the crowd whether it could digest the fact that such a chief minister had released the Congress manifesto promising to combat corruption.

Even a small child from Himachal would not fall for it, he declared.

Targeting Congress vice president Rahul Gandhi for meeting the Chinese ambassador during the stand-off in Dokalam earlier this year, Modi said, "The leader whose father, grandmother and father of the grandmother were PMs of India, and who has been born and brought up in the ruling family, is acting in an insulting way.

"Isn't it insulting when these people hold talks with Chinese leaders on Dokalam instead of asking the elected government?"

The prime minister also brought up India's first prime minister Jawaharlal Nehru with a reference to the Jan Sangh, which he said was created to counter the Congress through the efforts of leaders like Shanta Kumar, a former chief minister of the state and a BJP candidate from the area.

Continuing his attack, he said it was not the Congress of Mahatma Gandhi or of freedom fighters but a party of corruption and dynasty politics.

People across the country were engaged in Swachhta Abhiyan (cleanliness campaign) and were 'wiping out' the old party whenever they got the opportunity through elections, Modi said.

India would forgive those who work in public life with honesty and make mistakes but not those who do wrong and deceive people intentionally, he said.

The Congress, he added, must introspect on why people were punishing it. "But one needs to have soul to introspect."

Modi also accused the Congress of allowing the growth of 'danavas' (monsters) in Devbhoomi.

"It is time to save Himachal Pradesh from those who looted it...from the monsters," he added.

There are, the prime minister said, five monsters in Himachal Pradesh that people need to get rid off -- 'mining mafia, forest mafia, drug mafia, tender mafia and transfer mafia'.

Exhorting people to come out in large numbers, he said he wanted record polling this time.

"I know we will win anyway, because I have worked in Himachal and know the pulse of the people of this hill state... You have the opportunity to dismiss those who looted the state by pushing the right button on November 9," he said.

Making a strong pitch for the Bharatiya Janata Party, Modi said people should remember Wazir Ram Singh Pathania, a local freedom fighter from the British era, when they cast their votes to bring the 'right' party to power in the hill state.

Kangra district has 15 seats in the 68-member Himachal Pradesh assembly.

The prime minister is scheduled to address two more rallies in the district ahead of the elections. Virbhadra Singh is facing cases related to income tax returns, disproportionate assets and money laundering.

The cases are being investigated by various probe agencies. 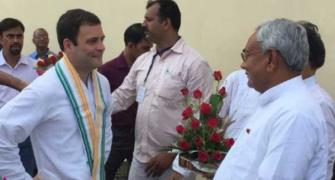