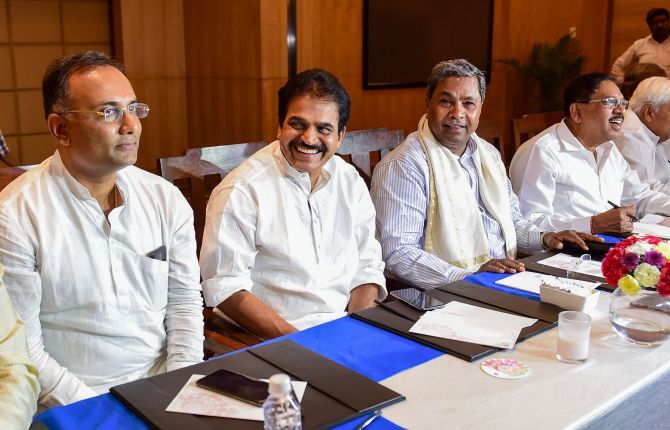 As the Lok Sabha election debacle pushed the ruling coalition in Karnataka into a greater turmoil, the Congress on Wednesday went into an overdrive to avert a potential existential crisis to the one-year-old H D Kumaraswamy ministry.

Rushed to Bengaluru by the party high command on a damage control mission, Congress general secretary K C Venugopal met Kumaraswamy, senior party leaders and ministers and attended a legislature party meeting to save the coalition from an intensified Bharatiya Janata Party onslaught.

Congress Legislature Party leader and Congress-Janata Dal (Secular) coordination committee chief Siddaramaiah said no one would leave the Congress and there was no disgruntlement either.

"All of us are together.This government is strong and will survive. If BJP tries to destabilise the government, they will be biggest fools," he told reporters after the CLP meeting, attended by 72 Congress MLAs, with two rebels Ramesh Jarkiholi and R Roshan Baig giving it a miss.

Two other missing lawmakers -- Ramalinga Reddy and Byrati Basavaraj -- had obtained permission not to attend the meet, he said.

Ramesh Jarkiholi has been hobnobbing with the BJP leaders indicating that he may jump the ship, while Baig has been ridiculing the party leadership and praising prime minister Narendra Modi, leaving the Congress red-faced.

A joint legislature party meeting of the Congress and JD-S would be held soon, he added.

The CLP also revoked the suspension of MLA Kampli Ganesh, who had faced the action after an alleged brawl with a party colleague at a resort in January.

Coalition worries have multiplied after BJP's spectacular win with 25 of the 28 Lok Sabha seats in its pocket, leaving a mere one seat each to Congress and JD-S, which, despite a joint fight, were swept away by the Modi wave.

Buoyed by the landslide win in the LS polls, the BJP, which emerged as the single-largest party in the 224-member assembly in the May polls last year, is reportedly eyeing to capture power amid reports of a rift between Congress and JD-S.

The BJP had won 104 seats and added one more to its tally in the bypolls held along with Lok Sabha elections.

The Congress had won the Kundgol bypoll.

The ruling combine has 117 members -- 78 of the Congress, 37 of the JD-S, one of the Bahujan Samaj Party and one Independent.

During the meeting with leaders, the electoral debacle and alleged threat to the coalition from the BJP were discussed, Congress sources said.

Sources said the leaders were unable to reach consensus on whether to go in for cabinet expansion by filling three vacant posts or reshuffle by asking a few ministers to step down and make way for the disgruntled lawmakers.

A section of party leaders including Siddaramaiah are said to be of the opinion that cabinet expansion may be suitable, as any attempt for reshuffle may further worsen the situation. Several senior ministers not willing to give up their posts berths now will make the cabinet reshuffle a hardball, sources said.

Leaders are now expected to take a call on this after wider consultation with MLAs and the Congress high command.

Of the total 34 ministerial positions in Karnataka, Congress and JD-S have shared 22 and 12 respectively.

Currently, three posts are vacant, two from JD-S and one from Congress. Even as the coalition leaders were struggling to save the government, ministerial aspirants started lobbying, with a few of them even meeting Venugopal on Wednesday with a request.

Many Congress legislators have expressed strong reservation against priority being given to disgruntled MLAs, while sidelining the loyalists.

With growing number of aspirants and a fewer posts in hand, the proposed reshuffle has become more complicated.

Dinesh Gundu Rao, without divulging much, said the discussions were centred on election results and the way ahead.

Amid simmering discontent within the Congress, the coalition leaders fear that the BJP, spurred by the Lok Sabha poll outcome, may poach some MLAs.

The BJP had predicted the collapse of the coalition after the LS poll results, claiming that 20 odd Congress MLAs were unhappy and may take 'a decision' anytime.

Over the last two days, Kumaraswamy himself met several disgruntled legislators, including Jarkiholi's confidant and Athani MLA Mahesh Kumathalli, and is said to have promised to look into their issues.

He is also said to have given an assurance about including Jarkiholi in the cabinet.