It is significant that the matter has not been listed before the judges who are number two to five in the seniority. 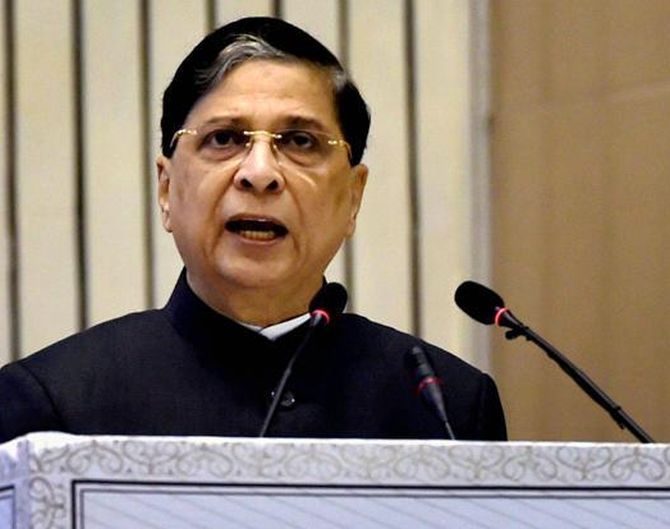 A five-judge constitution bench of the Supreme Court is all set to hear on Tuesday a petition moved by two Congress MPs challenging rejection of the impeachment notice against Chief Justice of India Dipak Misra by Rajya Sabha Chairman M Venkaiah Naidu.

The bench will be headed by Justice A K Sikri, number six in seniority. The other members are Justices S A Bobde, N V Ramana, Arun Mishra and A K Goel, who are next in the sequence of seniority.

The senior-most judges -- Justices J Chelameswar, Ranjan Gogoi, M B Lokur and Kurian Jospeh -- who had held the controversial January 12 press conference in which they had virtually revolted against the CJI by raising litany of allegations against him, have been kept out of the matter.

The setting up of the constitution bench was mentioned in Tuesday's list of business for the Supreme Court.

The development came hours after Justice Chelameswar, before whom the petition of the two Congress MPs was mentioned, expressed reservation in hearing the matter asking senior advocate Kapil Sibal and advocate Prashant Bhushan to "come back tomorrow".

The issue was raised at the start of the court's work in the morning when Sibal, one of the signatories to the impeachment notice in Rajya Sabha, mentioned the matter for urgent listing before a bench headed by Justice Chelameswar, the senior-most after CJI Misra.

In the petition challenging the rejection of impeachment notice against the CJI by the Rajya Sabha Chairman, the two MPs claimed that the reasons given were "wholly extraneous" and not legally tenable.

While Justice Chelameswar had initially asked him to mention the matter before the CJI, the bench, also comprising Justice S K Kaul, later asked Sibal and Bhushan to "come back tomorrow".

Justice Chelameswar also said he was on the verge of retirement.

Making his submissions, Sibal said Chairman Venkaiah Naidu cannot summarily reject the notice bearing signatures of 64 MPs and seven former members who had recently retired, on the ground that there was "no proved misbehaviour".

The bench asked Sibal and Bhushan to mention the matter before the Chief Justice of India for urgent listing, citing a constitution bench judgment on the powers of master of roster.

However, BJP leaders and advocates Meenakshi Lekhi and Aman Sinha said there was no merit in the challenge to the rejection of the impeachment notice as the Rajya Sabha Chairman's order was well reasoned and completely dealt with each and every ground.

While Lekhi termed the filing of plea in the apex court as a "deceptive methodology" of the Congress party to remain in the news, Sinha said there was no legal ground to challenge the decision of the Rajya Sabha Chairman.

In the apex court, Justice Chelameswar, who was initially reluctant to order listing of the petition said "there was a five-judge constitution bench verdict on powers of master of roster. It would be appropriate if you mention the matter in court number-1 before the bench of Chief Justice".

However after the submissions, Justice Chelameswar and Justice Kaul went into a huddle and asked Sibal and Bhushan to come tomorrow so they could take a call on the issue. "You come back tomorrow. We will see", the bench said.

The two leaders who have filed the petition are Rajya Sabha Congress MPs Partap Singh Bajwa from Punjab and Amee Harshadray Yajnik from Gujarat.

A five-judge constitution bench of the apex court had on November 10 last year categorically stated that the Chief Justice of India was the "master of the roster".

Advancing his arguments, Sibal said "I am aware of the procedure but it can't be mentioned anywhere else. A person cannot be a judge in his own cause. I am just asking for urgent listing and not seeking any interim relief."

He said the CJI cannot order for listing and hence the senior-most judge of the court must pass some orders as it was a matter of constitutional importance.

Naidu had on April 23 rejected the impleachment notice given by seven opposition parties led by the Congress on five grounds of "misbehaviour". This was the first time that an impeachment notice was filed against a sitting CJI.

The petition of the two Congress MPs filed through advocate Sunil Fernandes in the top court alleged that the charges contained in the notice of the motion were extremely serious and called for a full fledged inquiry.

It also said the reasons given by Naidu while rejecting the impeachment notice were "not legally tenable" and deserved to be set aside for being "wholly extraneous" and ultra vires the provisions of the Constitution and the Inquiry Act.

It sought setting aside of the Chairman's order terming the charges contained in the notice of motion are "extremely serious" and merit "a full-fledged inquiry to test their veracity".

The Supreme Court virtually dampened the spirits of opposition MPs publicly advocating impeachment of Chief Justice of India Dipak Misra, observing that the Rajya Sabha rules prohibited them from making public statements on removal of a judge of the higher judiciary without any notice in Parliament.

The apex court, which was hearing a plea seeking to restrain members of parliament from making public statements on removal of a judge without any notice in Parliament, also said there was "no urgency" in the mater and posted the hearing for the third week of July.

When a bench comprising Justices A K Sikri and Ashok Bhushan was told that public statements by politicians were made without there being any such notice in Parliament, the bench said, "Rajya Sabha Rules also prohibits such statements".

Senior advocate Meenakshi Arora, representing petitioner NGO 'In Pursuit of Justice', said the issue raised in the plea was concerned with the "times to come" and required consideration by the top court.

The bench responded by saying "why do you feel that such a time will come again and again" and adding "there is no urgency now".

Attorney General K K Venugopal, who was earlier asked by the court to assist it in the matter, told the bench that the plea has become infructuous.

The petitioner said it has been held the world over that making such public statements amounted to interference in the independence of the judge concerned.

During the hearing, the Attorney General referred to the Judges (Inquiry) Act and the constitutional provisions dealing with the establishment of the Supreme Court and the procedure to be followed for removal of an apex court judge.

Regarding the plea which also seeks laying down guidelines to regulate the procedure to be followed prior to initiating a motion for removing a judge of the top court, the bench said "we do not have to frame any guidelines".

Arora said the Judges (Inquiry) Act comes into effect only after the Rajya Sabha Chairman takes notice of the motion for initiation of removal proceedings against a judge of higher judiciary and sets up an inquiry commission. But they have raised the issue of public statements by MPs even ahead of such a notice being there before Parliament.

However, Venugopal said the process of removal proceedings was part of the privilege of the Parliament.

The bench said the issue before it was whether there should be a discussion outside Parliament about it without there being any such notice in the House.

Arora then referred to the recommendations of the Law Commission and said it has also said that such public statements cannot be made outside.

"We can dispose it (plea) of by directing the Law Commission to look into it," the bench then observed.

The senior counsel said the commission had given its recommendation way back in 2005 that it should be an offence to discuss these things outside the House, but nothing has been done till now.

The plea has sought laying of guidelines or modalities regulating procedure to be followed by MPs, desirous of initiating proceedings for removal of a judge of the Supreme Court or a high court, prior to initiating a motion under Article 124(4) and (5) and 217(1)(b) of the Constitution. Articles 124(4) and (5) deal with the procedure to be followed for removal of an apex court judge.

The petitioner has said the cause of action arose in the matter when a draft motion for removal of the CJI was released to the press on March 27 which had an effect of intimidating the judiciary.

The plea also referred to various media reports carrying the statements of MPs and politicians in this regard and said no law was made by Parliament which permits the circulation of a draft notice of motion to the media.

On April 20, the apex court had refused to gag the media at this stage from publishing or telecasting any information relating to discussions and deliberations on removal of judges of either the apex court or the high courts. 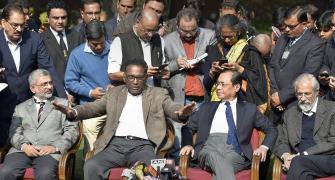