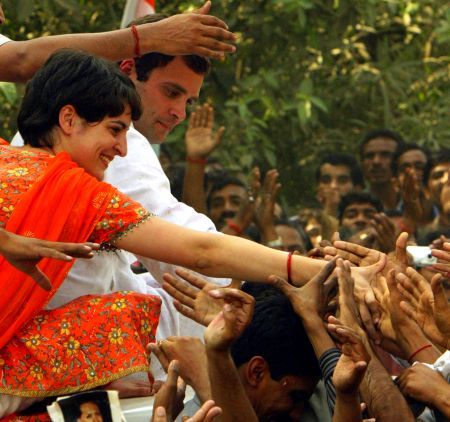 If Priyanka Gandhi does take a plunge into electoral politics as demanded by the Congress rank and file, it will tantamount to an admission that Rahul Gandhi lacks the necessary qualities to take on Narendra Modi. On the other hand, the Congress also needs to change the political discourse in its favour, notes Anita Katyal.

Although senior Congress leaders went out of their way to play down Priyanka Gandhi Vadra’s participation in an internal meeting on Tuesday, it has become increasingly clear that party president Sonia Gandhi’s charismatic daughter has stepped up her engagement in the run-up to the upcoming Lok Sabha elections to help her brother.

She could follow it up by stepping outside Sonia and Rahul Gandhi’s Lok Sabha constituencies of Rae Bareli and Amethi to campaign across the country in the coming general election. There is also a possibility that Priyanka Gandhi could take a plunge in electoral politics by replacing Sonia Gandhi in Rae Bareli as the party’s candidate in the Lok Sabha polls.

Reports about the possibility of Priyanka Gandhi playing a larger role in the general election have been surfacing periodically, but these have been strenuously denied by Congress leaders.

These reports gained traction once again on Tuesday when she sat in on a meeting with senior party leaders at party vice-president Rahul Gandhi’s residence. It is learnt that Rahul Gandhi was not present at this meeting as he is out of town.

Reliable Congress sources said the deliberations focused on Rahul Gandhi’s projection in the coming election as well as the party’s publicity and campaign strategy. Inflation and corruption also came up for discussion as it has been acknowledged in the party that the Congress paid a heavy price in the recent assembly polls on account of these two issues.

However, the official response was that the meeting discussed Sonia and Rahul Gandhi’s tour programmes.

Congress sources repeatedly maintained that this is not the first time that Priyanka Gandhi has interacted with party leaders and that Tuesday’s meeting was no exception.

But as media speculation about Priyanka Gandhi’s enlarged role in Congress affairs picked up speed during the day, Janardan Dwivedi quickly stepped in to play down these reports though he did not deny that she had participated in an internal party meeting.

His explanation: "She is a member of an important political family. May be she is not seen as participating in active politics but she is an active member of the Congress.

"She has been working in Amethi and Rae Bareli. She has her own views on political issues and holds deliberations with party workers from time to time. If she has held a meeting with party leaders, it is not surprising, nor is there anything new about it.”

Clearly, the Congress is in a dilemma. If Priyanka Gandhi does take a plunge into electoral politics as demanded by the party rank and file, it will tantamount to an admission that Rahul Gandhi lacks the necessary qualities to take on the BJP’s prime ministerial candidate Narendra Modi. In fact, there is also a fear that Priyanka Gandhi could even eclipse Rahul Gandhi and undermine his position in the party.

On the other hand, the Congress needs to change the political discourse in its favour. With the party under constant attack for rising prices, poor governance and increasing corruption, the Congress vice-president has been completely overshadowed by Modi and now, the Arvind Kejriwal-led Aam Admi Party.

Rahul Gandhi will personally come in for sharper criticism if he is formally anointed as the Congress party’s prime ministerial candidate at the January 17 AICC meeting in New Delhi.

It is believed this narrative could change if Priyanka Gandhi decides to step up her engagement in Congress affairs and becomes more visible as she has a charismatic personality and can connect naturally with party workers and crowds at public meetings.

Now that Congress leaders have admitted to Priyanka Gandhi’s involvement in the party’s strategy sessions, she could follow this up by campaigning extensively across the country in the coming Lok Sabha elections to assist Rahul Gandhi who is overseeing the campaign.

So far, Priyanka has confined her activities to her mother and brother’s Lok Sabha constituencies Rae Bareli and Amethi. Congress insiders maintain that given the strong bond between the brother and sister, Priyanka will go all out to help Rahul but without overshadowing him.

Priyanka has already taken charge of her mother’s Lok Sabha constituency, Rae Bareli, where she has been holding training workshops for party workers over the past one year.

The frequency of these trips has increased after Sonia Gandhi’s illness, which has also given rise to speculation that Priyanka Gandhi may contest from the family bastion of Rae Bareli in this Lok Sabha election instead of her mother.

This would enable Sonia Gandhi to hand over the reins of the party to the younger generation, a process which was put in place last January when Rahul Gandhi was elevated as Congress vice-president.

The official reason offered for Priyanka’s increasing forays to Rae Bareli by Congress leaders is that the constituency needs to be nursed as the party is precariously placed in Uttar Pradesh. In fact, the Congress lost all five seats in the Rae Bareli constituency in the 2012 assembly elections. Moreover, Sonia Gandhi could not devote so much time because of her health and other pressing engagements.

Image: Priyanka Gandhi has already taken charge of her mother’s Lok Sabha constituency, Rae Bareli, where she has been holding training workshops for party workers over the past one year.