According to the current plan in Congress party quarters to end the stand-off on a parliamentary probe into the telecom scam, Prime Minister Manmohan Singh is likely to make a statement in Parliament on Tuesday, a day after it convenes, asking the Speaker to form a Joint Parliamentary Committee on the subject.

By the rules, Speaker Meira Kumar will authorise this. A JPC generally has two-thirds of its members from the Lok Sabha and the rest from the Rajya Sabha. The government managers have not indicated the intended size of the JPC to the opposition.

"We don't know what the government's plans are. But all the parliamentary standing committees have 30 members, apart from their chairmen. We feel if a JPC is formed, the government must adhere to this norm. Also, all the previous JPCs had 30 members in them," said Communist Party of India - Marxist leader Sitaram Yechury.

Top government managers, during the past 24 hours, have spoken to leaders of important national parties and sought their opinion on a JPC. All these parties felt a JPC should be allowed.

On Wednesday, hours after the PM went on attack mode and said he was not the 'stumbling block' in the process of forming a JPC, top Congress managers swung into action to reach a deal.

The BJP assured it would not disrupt the President's Address on the opening day of the session, on the condition that the government must announce a JPC the next morning.

The Congress leadership, however, has not made up its mind on the latest demand of the main opposition party, the BJP, for a JPC to probe the Commonwealth Games, Adarsh co-operative housing scandal and the Antrix-Devas issue.

"A JPC can expand its scope of investigation even if there are terms of reference" said Gurudas Dasgupta, who was a member of the JPC to probe the Harshad Mehta scam.

The Congress is trying to extract a definite promise from the BJP to allow a discussion on the issue of corruption on the floor of the House. A discussion, according to Congress sources, will allow the government to highlight its defence and also attack the opposition before the JPC can start its work, which is likely to continue for at least a couple of years. 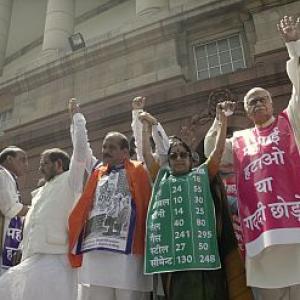