"Congress is gearing up to rule Jharkhand indirectly by prolonging the President's rule, which is not good for democracy. The assembly should be immediately dissolved to pave way for elections," JVM-P president Babulal Marandi said at a public meeting in Medininagar in the headquarters town of Palamau district.

Asserting that his party would go it alone in the next assembly elections, as and when conducted, the former chief minister opined that the house should be dissolved without any delay as no party had initiated to form government even after nearly three months passed after the imposition of President's rule.

Congress and JVM-P had a pre-poll understanding in the November elections. They jointly won 25 seats. Announcing that former RJD MP Ghuran Ram had joined his JVM-P, Marandi said his party was preparing for elections.

Marandi, a Lok Sabha member from Giridih, said there should not be an leniency in combating the menace and claimed that it was his government in 2000/01 which had stopped functioning of 'kangaroo courts' of the Maoists.

"Those who want to shun violence and join the mainstream are welcome but anti-Naxal operations should continue relentlessly," he added. 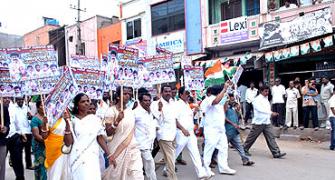 Election is the only option in Jharkhand: Marandi

Games corruption will be probed: Govt