Upping the ante on the farm bills issue, the Congress on Monday announced a massive people's movement which would include protest marches, agitations and collecting two crore farmers' signatures for a memorandum against the legislations to be submitted to President Ram Nath Kovind. This was decided at a meeting of Congress general secretaries and state in-charges, the first physical meeting held by the party at its 24 Akbar Road headquarters in New Delhi since the outbreak of the COVID-19 pandemic.

A resolution hitting out at the three farm bills -- the Farmer's Produce Trade and Commerce (Promotion and Facilitation) Bill, 2020, the Farmers (Empowerment and Protection) Agreement of Price Assurance and Farm Services Bill, 2020 and the Essential Commodities (Amendment) Bill, 2020, -- was also passed at the meeting.

The meeting, called on the directions of Congress president Sonia Gandhi and former party chief Rahul Gandhi, was attended by the general secretaries and state in-charges of the party and was supervised by the members of the special committee assisting Sonia Gandhi in organisational and operational matters.

Rahul Gandhi is accompanying his mother Sonia Gandhi to the United States for her medical check-up.

Most leaders were present physically but some such as Priyanka Gandhi Vadra and Jitin Prasada attended the meeting through video conferencing.

At a press conference after the meeting, senior Congress leader Ahmed Patel said the opposition party will take the farm bills issue to the people not only at the state level, but at the district and village level.

"We discussed the political situation of the country especially the farmers' agitation. The way the government of India is bulldozing anti-farmers' laws in Parliament, it is totally unacceptable to the country and the people of India," said Venugopal, flanked by Patel, Antony and Surjewala at the press conference.

"What we had witnessed in Rajya Sabha yesterday and today, we did not expect this type of attitude from a democratic government," he said, referring to the commotion in Rajya Sabha on Sunday and the suspension of eight MPs of the Upper House on Monday.

Venugopal alleged that Prime Minister Narendra Modi was 'misleading the country' by making allegations against the Opposition.

Surjewala also hit out at the government, alleging that the livelihoods of farmers and labourers was 'being ended'.

In the next 72 hours, Congress general secretaries, state in-charges and senior leaders will hold press conferences at state headquarters against these farm bills, the Congress' chief spokesperson said.

Then in the next four days till September 28, Congress chief ministers, Pradesh Congress Committee presidents, Congress legislative party leaders along with MPs, MLAs and senior leaders will walk from the PCC office or a prominent place like Mahatma Gandhi statue to the Raj Bhavan and submit a memorandum to the Governor, addressed to the President of India, seeking withdrawal of these farm bills, Surjewala said.

A press statement by the party said the marches to submit the memorandum to the Governors will be held on September 28.

"On October 2, the birth anniversary of Mahatma Gandhi and Lal Bahadur Shastri, we will observe 'Save farmers and farm labourers day'. We will hold dharnas and marches in every state and district headquarters across India against the agriculture bills, asking for their immediate withdrawal," Venugopal said.

On October 10, all state units will organise 'kisaan sammelans' so that voices of farmers can be heard, he said.

Surjewala said from October 2-31, Congress workers will go to villages and collect signatures from farmers and the poor against the three agriculture-related bills.

Two crore signatures will be collected and the memorandum against the bills will be submitted to the President on Jawaharlal Nehru's birth anniversary on November 14 by the Congress chief, he said.

Surjewala asked how the farmers will get MSP once 'the APMC or the farmers markets are abolished'.

Referring to Prime Minister Narendra Modi's statement that this year despite the COVID-19 pandemic Rs 1,13,000 crore was given as MSP to farmers in Rabi for wheat, 'dhan', 'dalhan' and 'tilhan', Surjewala claimed the prime minister 'does not even know' that 'dhan' and 'arhar' (dalhan) are kharif crops and not rabi.

However, the crops the PM talked about are grown in Rabi season in some parts of the country, according to agriculture experts.

The Congress also accused Shiromani Akali Dal of indulging in double-speak and of being dishonest on the farm bills and asked why they have not left the ruling National Democratic Alliance.

The resolution passed at the meeting alleged that the Modi government has got the farm bills passed by violating the federal structure, crushing the constitution, bypassing the parliamentary system, on the basis of majority.

The Congress stands shoulder to shoulder with the farmers and farm labourers of the country and the party workers as well as leaders will strongly oppose these anti-agriculture 'black laws' all over the country, the resolution said.

This was the first meeting after the Congress' organisational rejig in which several new general secretaries and in-charges were appointed.

Dozens of Delhi Congress leaders and workers marching towards Parliament on Monday to protest against the new farm Bills were detained by the police.

Led by Delhi Congress president Anil Kumar, the protesters were marching towards the Parliament building but were stopped on R P Road and detained, the party said.

Kumar alleged, "The Modi Government was foisting anti-farmer Bills on the farmers who were already reeling under tremendous financial stress due to the COVID-19 pandemic. The Bills will destroy the farmers in the country."

The Delhi Congress will continue to forcefully raise the voice of the farmers till the proposed anti-farmer legislations are withdrawn, he asserted. 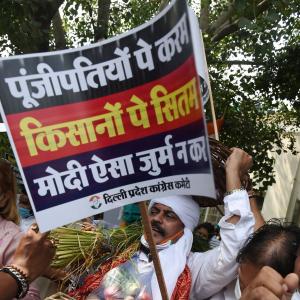