Ahead of the assembly elections, the saffron allies may be ecstatic over the swelling, but it's a double-edged sword with many older leaders wondering what they have got after putting in years of hard work, reports Radhika Ramaseshan. 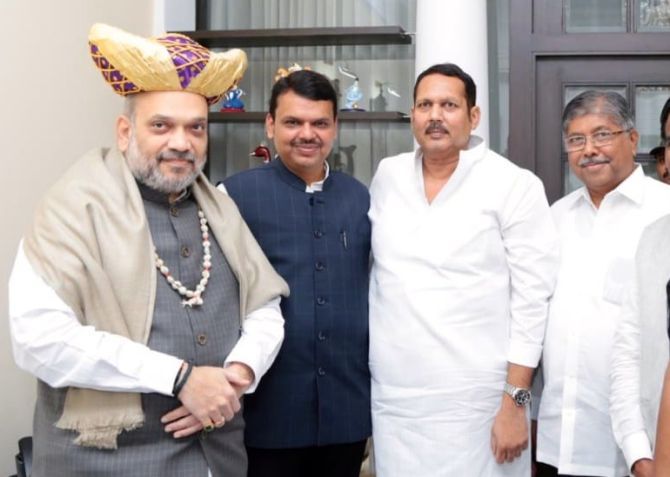 “Neither ideology nor policies of the BJP have triggered the ‘incoming’ (of defectors) into the party in recent years. Instead, it is sheer preservation of self-interest. Ants will always invade a lump of gur (jaggery)”

This acerbic quote in the editorial of the Shiv Sena’s mouthpiece had appeared when Maharashtra witnessed a fresh round of political defections, largely to the Bharatiya Janata Party, in the prelude to the assembly election. The pique emanating from the BJP’s oldest ally-turned-junior partner was partially unjustified because the outflow from the Congress and the Nationalist Congress Party was not one-way. Some turncoats embraced the Sena, too.

“It was an arrangement. When we didn’t have a place (for the renegades), we sent them to the Sena,” said Girish Mahajan, the BJP’s prime negotiator with the opposition hopefuls.

The prize catch was, however, netted by the BJP because “we rule the marketplace”, as Atul Bhatkhalkar, Maharashtra BJP general secretary, put it.

Udayanraje Bhosale, the Satara MP, was the season’s trophy; he is believed to be Chhatrapati Shivaji’s direct descendant and wields influence transcending his constituency in large parts of western Maharashtra. “He holds the seat of Maratha power. The other clans, such as the Holkar and the Scindia, are secondary to the Satara throne,” said a Congress leader from the region.

Bhosale quit his Lok Sabha seat within four months of being elected from the NCP, although he was not counted among NCP president Sharad Pawar’s staunchest loyalists because he was with the BJP in the late 1990s and a minister in its coalition government.

The NCP suffered an irreparable loss after Pawar’s relatives Padamsinh Patil and his son Rana Jagjitsinh, an MLA, joined the BJP. When Pawar was asked about the departure of the Patils in a press conference, uncharacteristically, he lost his equanimity.

The outpouring from Maharashtra’s Opposition has created a situation where the BJP has a “problem of plenty” and the Congress-NCP has one of “scarcity”.

“The scenario is grim. Some sitting MLAs of ours said they’d rather fight as Independents than on our symbol,” admitted a senior Congress leader, blaming Pawar and his politics of raising and “ruining” cooperatives for the Congress’s plight.

Of the 31 per cent Maratha population, agriculture is the lifeline for nearly 80 per cent of them. A little over 150 Maratha families control the cooperative industry, keeping the poor farmers out. The “Pawar template”, said Congress and BJP sources, was sustained on drawing large subsidies through “questionable” means from the government, mismanaging the institutions, and finally running the cooperatives to the ground.

“There’s always a paper trail leading to the offenders, who rushed to the BJP for protection because they knew Pawar can’t help,” alleged a Congress source.

Even as Madhav Bhandari, Maharashtra BJP chief spokesperson, agreed the “cooperative movement was in trouble because of fiscal mismanagement”, he maintained that “saving culprits” was not the reason for inducting NCP and Congress leaders.

Union minister Prakash Javadekar explained: “We need strong persons in areas where we are traditionally weak. We will never win Satara without Bhosale.”

Ganesh Naik, who lost the 2014 assembly election to the BJP’s Manda Vijay Mhatre, bounced back in the Brihanmumbai Municipal election, demonstrating that his base among the Aagri community in Navi Mumbai was intact. He was spirited away from the NCP because he augmented the BJP’s strength in the corporation by 50 elected members.

“Barring the Pawars, everyone from the NCP wants to join the BJP,” claimed a senior functionary but Bhatkhalkar red-flagged the boast with the assertion that “we use filters”.

“Taking outsiders is not a new phenomenon in the BJP. It’s noticed now because we are in power. Our criterion is to bring in those who can fill the leadership vacuum in places where we didn’t nurture our leaders because for decades we were in alliance with the Sena,” said Bhatkhalkar. The BJP took a special interest in those opposition MLAs who won the last state election despite a “Modi wave”, and the four Lok Sabha constituencies that the NCP managed to keep against heavy odds in 2019.

The BJP’s open-door policy triggered resentment among the old-timers. “It’s a double-edged sword. The older leaders wonder what they have got after putting in years of hard work. The BJP’s aim is to psychologically enfeeble the Opposition but we have to see how many new entrants get seats and ministries if it comes back to power. But to the younger rank-and-file, nothing matters other than getting power,” a Maharashtra political observer noted.

Bhatkhalkar maintained that the fault lines, “if any”, were papered over by taking local leaders in confidence and hard-selling the imperatives of making “useful” inductions from the Opposition. “Ours is a workers’ and not a leader’s party,” he said.