Congress MPs from Punjab burnt copies of the farm bills proposed by the government inside the Parliament complex on Thursday even as the party staged a protest in front of Mahatma Gandhi's statue. 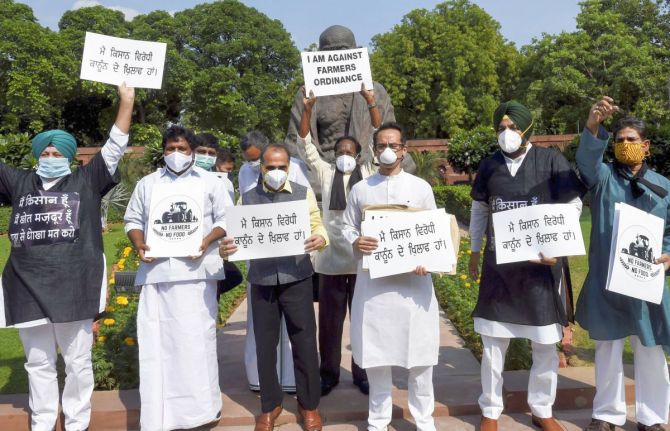 The Congress is opposed to the Farmers' Produce Trade and Commerce (Promotion and Facilitation) Bill, 2020 and the Farmers (Empowerment and Protection) Agreement on Price Assurance and Farm Services Bill, 2020 that the National Democratic Alliance government has proposed in Parliament during the ongoing monsoon session, replacing the ordinances issued by it earlier.

Congress MPs Jasbir Singh Gill, Ravneet Singh Bittu, Gurjit Singh Aujla and Amar Singh burnt copies of the bills and said they will oppose the proposed legislations tooth and nail. They also wore black robes, saying "I am a farmer and farm labourer and don't betray me".

They also criticised the Shiromani Akali Dal leadership for being in the Bharatiya Janata Party-led NDA even after these bills were proposed by the government.

"We will oppose these bills from Parliament to panchayats. We also appeal to all MPs to vote against the bills, hearing the inner voice of their conscience for the sake of 'zameer and zameen' (conscience and land)," Gill said.

Bittu said the BJP would be reduced to ashes if they play with the lives of farmers and their land.

"The BJP will be finished if it tries to kill farmers and their mother (land)," he said.

During the protest by Congress MPs in front of Mahatma Gandhi's statue in the Parliament complex, the opposition party's leader in the Lok Sabha, Adhir Ranjan Chowdhury, said the farmer community in the country is under severe stress due to the "anti-farmer" and "wrong" policies of the NDA government. 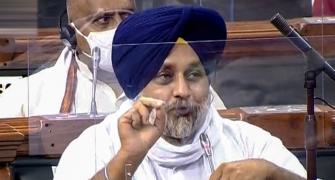