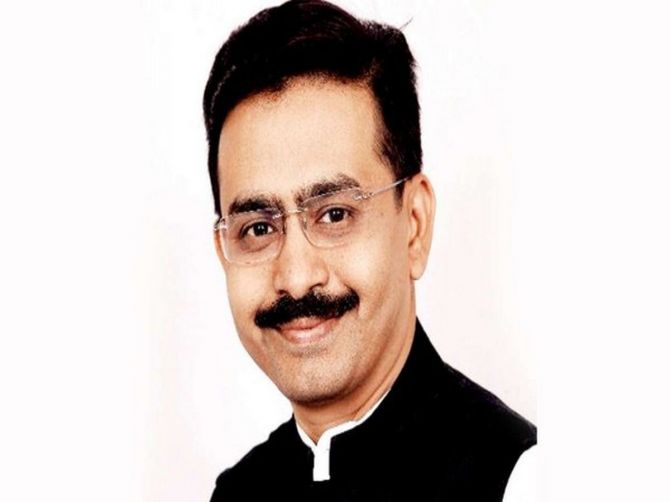 A media release by the Jehangir Hospital said Satav succumbed to 'secondary pneumonia with multi-organ dysfunction syndrome' around 5 am.

He had become 'RT-PCR swab negative' on May 9, it added.

Satav was admitted to the hospital on April 23 with severe COVID-19 pneumonia and acute respiratory distress syndrome, the hospital said.

Maharashtra health minister Rajesh Tope had said that Satav was diagnosed with Cytomegalovirus (a prevalent viral pathogen) after recovering from coronavirus infection. The hospital declined to comment on the minister's claim.

Satav on April 22 tweeted that he had tested COVID-19 positive.

Congress leader Rahul Gandhi condoled his demise and said it is a big loss to him.

'I'm very sad at the loss of my friend Rajeev Satav. He was a leader with huge potential who embodied the ideals of Congress. It's a big loss for us all. My condolences and love to his family,' tweeted Rahul Gandhi, bemoaning the loss of his trusted colleague.

Congress president Sonia Gandhi described Satav as a rising star of the party who was known for his unfailing dedication and sincerity, adding his death was a personal loss for her.

The Congress chief also spoke to Satav's mother and wife and expressed her heartfelt condolences.

'Anguished by the passing away of my friend from Parliament, Shri Rajeev Satav Ji. He was an upcoming leader with much potential. Condolences to his family, friends and supporters. Om Shanti,' tweeted Prime Minister Narendra Modi.

'I am deeply shocked by the untimely demise of Rajya Sabha member, Shri Rajiv Satav due to Covid-related complications. He was a dynamic parliamentarian & deeply committed to serving the people. My heartfelt condolences to the bereaved family members & his followers. Om Shanthi!' Vice President M Venkaiah Naidu tweeted.

Congress chief spokesperson Randeep Surjewala said he has been rendered speechless due to the loss.

'Today I lost a fellow who took the first step of public life with me in the Youth Congress and walked along till today...We will always remember Rajeev Satav's simplicity, ever-smiling, connected to the grassroots, loyalty and friendship. Goodbye my friend. Keep shining, wherever you are,' he tweeted.

Congress general secretary Priyanka Gandhi Vadra said, 'In Rajiv Satav we have lost one of our brightest colleagues. Clean of heart, sincere, deeply committed to the ideals of the Congress and devoted to the people of India.'

'I have no words, just prayers for his young wife and children. May they have the strength to carry on without him,' she said.

Pawar described him as a studious and aggressive leader.

'The demise of Rajeev Satav ji, Congress in-charge for Gujarat, who was always active in public life, is very sad. May the Lord bestow salvation to his divine soul and strength to his family members and loved ones to bear this suffering,' Gujarat Chief Minister Vijay Rupani tweeted.

The last rites of Satav, son of former Maharashtra minister Rajani Satav, will be performed at his native place Kalamnuri in Hingoli district on Monday, an official said.